Fueled by 427 rushing yards, the Bulldogs got on … 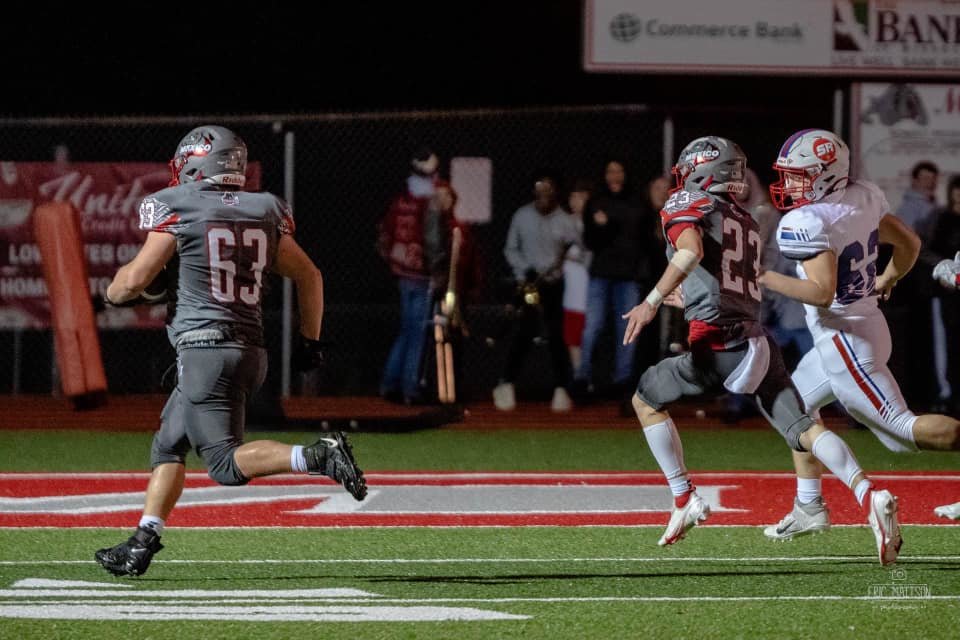 Fueled by 427 rushing yards, the Bulldogs got on the board in the second quarter when quarterback Ty Sims handed off to Anthony Shivers. Shivers took it from there, rambling 33 yards for the touchdown. Andrew Runge added the extra point to tie the game.

Kendyr Taylor blocked a Moberly punt later in the quarter and teammate Deacon Haag recovered and ran 28 yards for the score. After another Runge point-after, the Bulldogs were up 14-7.

Coming out of the half, the Bulldogs picked up where they left off in the third quarter, taking command of the game on 21 points. Shivers added three rushing touchdowns - including a 69-yarder - to put the Bulldogs in the commanding lead.

At the end of three quarters, the Bulldogs were up 35-14.

Shivers would add another TD in the fourth quarter to cap a memorable Senior Night performance. And while Shivers ran unabated, the Bulldogs defense locked down, holding Moberly scoreless in the final quarter.

The Bulldogs defense turned in a big game, creating chaos in the Moberly backfield and adding two interceptions - both by Shivers - while holding Moberly to only eight first-downs, 111 rushing yards and 135 passing yards. Peyton Hoover, Matt McCurdy, Morgan Grubb, Kendyr Taylor and Deacon Haag each recorded a sack and Taylor and Haag each assisted on a sack.

And as the defense held, the Bulldogs ground game thrived, led by Shivers’ 252-yard night on 16 runs.

“Anthony is a hard worker who has a focus to do the best job he can to help the team win,” said Bulldogs coach Steve Haag. “We made some great blocks up front and outside for him, and Anthony did the rest with his speed and quickness. Defensively I think he wanted to improve this week and he found himself in better positions which allowed him to get a couple of interceptions. That is always good for our defense.”

“The seniors have done a good job contributing all year,” Haag said, “and that is important when you only have seven. We definitely have seniors who can make plays, and when they do it helps our team.  I think the biggest thing was that we played a couple in different positions that helped get others rest so they could play full speed.”

The Bulldogs are now 6-2 overall and 3-2 in the North Central Missouri Conference. They head to Warrenton to take on the Warriors Friday. Game time is 7 p.m.