Neither rain, nor even harder rain, could slow Mexico’s strikers on Tuesday evening as the Bulldogs drenched visiting Wright City 7-2.

The contest was lopsided from the start. Just over three … 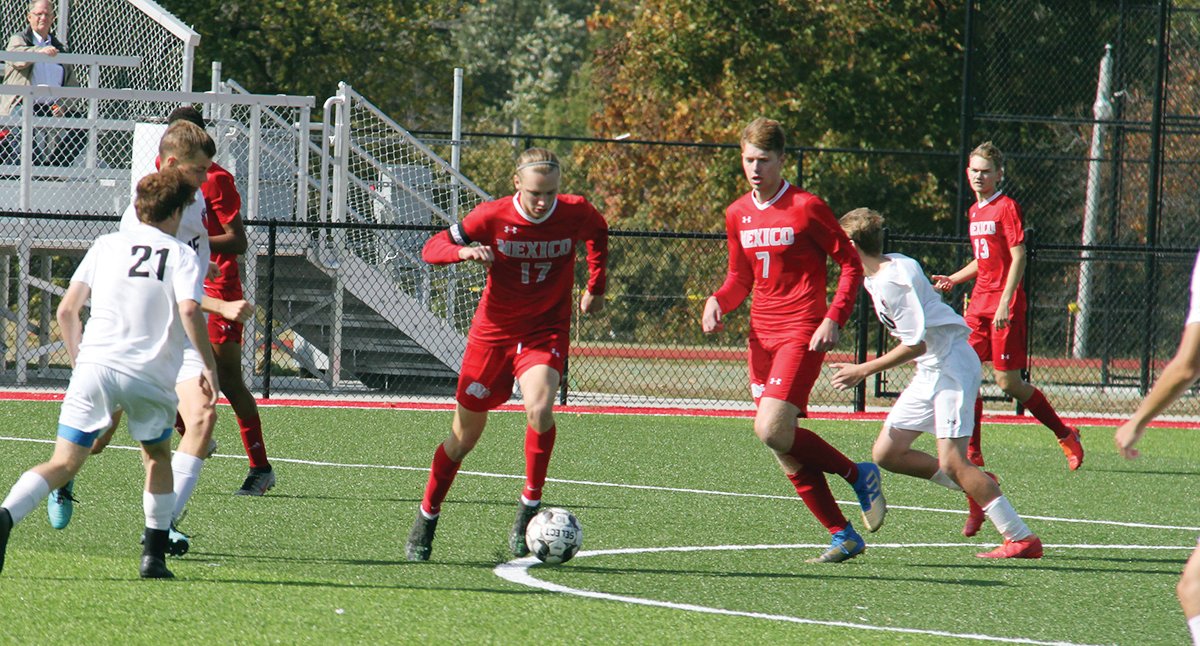 Neither rain, nor even harder rain, could slow Mexico’s strikers on Tuesday evening as the Bulldogs drenched visiting Wright City 7-2.

The contest was lopsided from the start. Just over three minutes in, Dominic McKeown fired a laser blast from 25 yards, beating Wildcats goalkeeper Logan Kellner. Meanwhile, Wright City didn’t seriously challenge Mexico glove man Brock Smythe until the 18th minute. By then the home side held a decided 4-0 advantage.

Mexico’s second goal came in a torrential downpour. Daeye Miller found Haden Frazier cutting between two defenders. Frazier took it from there, driving a low and vicious shot into the back of the net. Four minutes later – when the off and on rain slackened but the field remained slick – Logan Carter moved the ball from midfield and dished to Mason Lower on the right wing. Lower turned to the middle, passing off to Jordan Mitchell. It was a tidy display of combination ball that ended in a bit of slapstick.

“The defender slid,” the Bulldogs junior said, referring to the wet surface. “Then I slid and tapped it. It was almost an accidental goal.”

Accident or no, Mexico led 3-0. And Mitchell made it 4-0 moments later, collecting a pass from Randy Hernandez, dribbling into the box and popping a goal over the Wildcats’ harried keeper.

Not everything went in for the boys in red. A bit of individual brilliance by Ricardo Juarez Ramirez led to an opportunity for Frazier, but Wright City’s Kellner intervened. As the clock ticked below the 10 minute mark, a bit of link up play between Lower, Miller and McKeown opened the way for another Frazier effort. Again, however, the Wildcats’ keeper was up to the challenge.

McKeown responded immediately with perhaps the goal of the season.

Instead of tipping the ball back to a teammate from the midfield spot to resume play, McKeown teed off, sending a long, arcing blast over the stunned Wright City keeper for a 5-1 lead.

It’s a shot the team jokes about in practice, something players try just for fun.

“We were up, so I thought ‘what the heck,’” McKeown explained. “I was kind of surprised it went in.”

Before another minute expired, Frazier made the score 6-1.

And all of that activity took place before the halftime whistle.

Mexico’s defensive line did not have it as easy as the score would indicate. Hunter Woolfolk pointed out that weather conditions made it difficult to launch a counterattack from their end of the pitch. On wet turf a pass from distance tends to skip past the intended target. Both teams struggled to connect on the long ball.

“We had a few mistakes here and there,” Woolfolk added.

The pace of play slowed in the second half. Midway through the period, referees paused play due to weather concerns. By then, however, the outcome was pretty much settled.