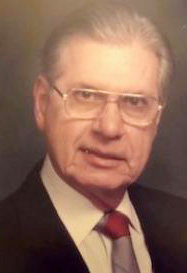 Charles Edward Kehl, 97, formerly of Mexico, passed away on Dec. 1, 2020, in Shelbina. Charlie was born March 16, 1923 in Mexico, to the late Charles F. and Myrtle (Staples) Kehl. He was preceded in death by his loving wife, Mary Kehl; his son, Lee Kehl; two brothers and three sisters.

Mr. Kehl had lived in Mexico most of his life and was a graduate of Mexico High School. Charlie served in the Army Air Corp as a pilot during World War II and later the National Guard. Flying was a passion in his life. From the 1950s through the 1980s on warm Saturday afternoons, Mr. Kehl could be seen at Scott’s Corner flying his model radio-controlled airplanes.

After his discharge from the Army, he became co-owner of Kehl’s Office Supply and later co-owner with Bob Carter in Carter-Kehl Office Supply. Mr. Kehl retired on Mar. 31, 1988.

Charlie was married to his high school sweetheart, Mary Margaret (Elliott) Kehl, on May 23, 1942. He is survived by one daughter, Barb Bertrand and Mike Bertrand of Farmington; three granddaughters, Holly Bertrand Landolt (Doug) of Park Hills, Kelly Bertrand James of Farmington, and Amy Kehl O’Rourke (Mark) of Sigourney, Iowa. He is also survived by six great-grandchildren, a very special friend, Lydia Gilbert, of Shelbina; and several nieces and nephews.

A private graveside service will be held on Monday, Dec. 7, at East Lawn Memorial Park.

In lieu of flowers, the family suggests memorials be made to the First Baptist Church in Mexico. They may be sent in care of Arnold Funeral Home, 425 S. Jefferson, Mexico, MO 65265.