A summer storm ripped through Mexico and Audrain County in the late Monday and early Tuesday hours, rendering several roads flooded and impassable and dumping as much as eight inches of rain in some … 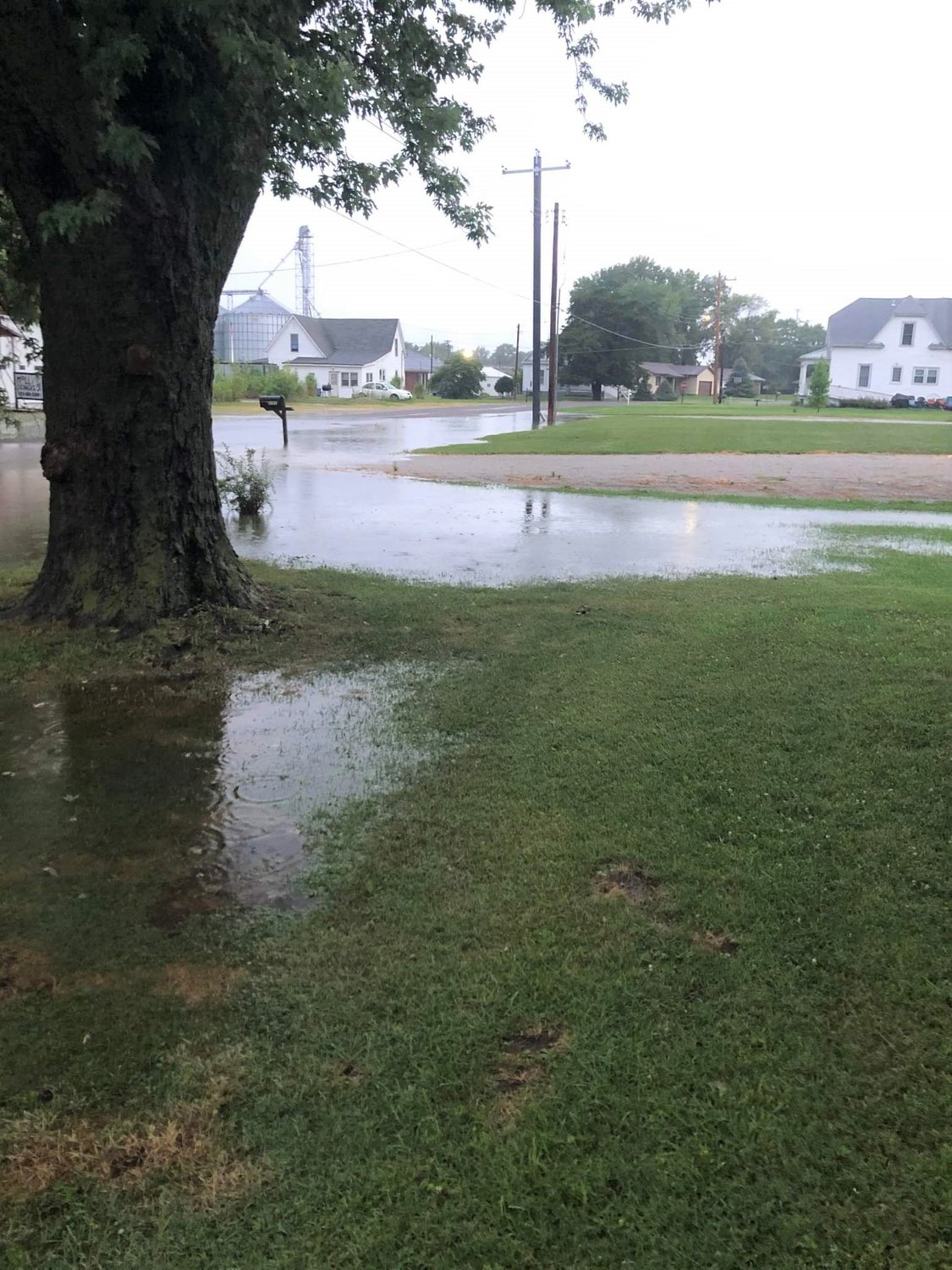 Martinsburg got hit hard by a recent storm that felt Audrain County and the Northeastern part of the state. (Submitted by Carol Lewis)
Posted Monday, August 1, 2022 12:17 am
By Alan Dale Managing Editor

A summer storm ripped through Mexico and Audrain County in the late Monday and early Tuesday hours, rendering several roads flooded and impassable and dumping as much as eight inches of rain in some locations.

Ben Herzog, senior meteorologist out of the National Weather Service out of St. Louis, said that the numbers can’t be pinpointed to a specific, but that this rain event was historic.

St. Louis broke its 24-hour record going back 150 years ago, and Herzog called it “record-setting rain.”

Mexico wasn’t immune from the effects.

“Mexico and the South-Central part of Audrain County is the starting point of very heavy rainfall,” Herzog said. “The heaviest rainfall was southeast and in the St. Louis Metro, but radar estimates say you guys saw somewhere around seven inches.”

The highest confirmed report of rainfall in the county was set 3-3.5 miles south/southwest of Mexico, which Herzog said had 7.05 inches as of Tuesday morning.

“There was another report out of north/northeast of Martinsburg, which had 6.29 inches,” Herzog said. “We had a report of 6.10 from our cooperative observer in Mexico.”

Thompson had reports of rainfall of 4.3 inches and radar estimates had Vandalia being north of the heaviest rains at 1.5 to 2 inches, Farber had 2.5 inches and Ladonnia was maxed at 4 inches with Rush Hill seeing buckets of 4.5 to 5 inches.

Auxvasse dealt with 4.5 to 5 inches in Calloway County. Wellsville had 8 to 9 inches and Centralia was estimated at 5 inches.

“Mexico was right in the heart of the heaviest rainfall,” Herzog said. “There was a stationary front which is a boundary between warm and cold air, and it was hanging out over the top of Missouri. While it sat there, we had some pretty strong winds out of the south and those brought up a lot of moist air into the area and generated all these thunderstorms.

“The boundary didn’t move, winds kept going in the same direction and so it caused storms to develop and redevelop and keep going all night long. Where we saw the heaviest rainfall is where the boundary was at, and it produced storm after storm.”

The storms lasted approximately six to nine hours depending on location.

Rain was expected to move south on Saturday, but storms could move into the area again Sunday.

“I would be surprised if we saw near as much rain as we saw (Monday) night,” Herzog said. “Even if we even see a quarter of an inch of rain over the same area, there really isn’t anywhere else for that water to go. It’s not going to rain as hard, but we could see more flooding if it falls at the wrong spot.”

Green Boulevard just north of Breckenridge, Fairground just south of Lakeview, and Elmwood between Lakeview and Smiley Drive were all closed.

There was also a short amount of time that South Clark, south of Boulevard, was closed as well.

Four vehicles ultimately became stranded in the flooded roadways, according to MOSD.

Mexico Public Safety also responded to a vehicle partially in a ditch in the 1100 block of Webster. The driver of that vehicle missed a turn due to low visibility from heavy rain. The occupants of all the vehicles were moved to safety and the vehicles were eventually towed from the various locations.

A few hours later, only Fairground Street remained closed, and the water was receding. There were no injuries from any of the incidents.

Residents are reminded to use care and not drive over flooded roadways. Two feet of running water can carry most cars. Additionally, when a roadway is covered with running water you do not know the condition of the surface underneath.

As of press time, no injuries or major damage was reported in and around Mexico.