In the final minute of Saturday’s title game of the Montgomery County Invitational, the only option left for New Haven was to hack away.

Mexico’s Isaiah Reams went to the line and hit two. … 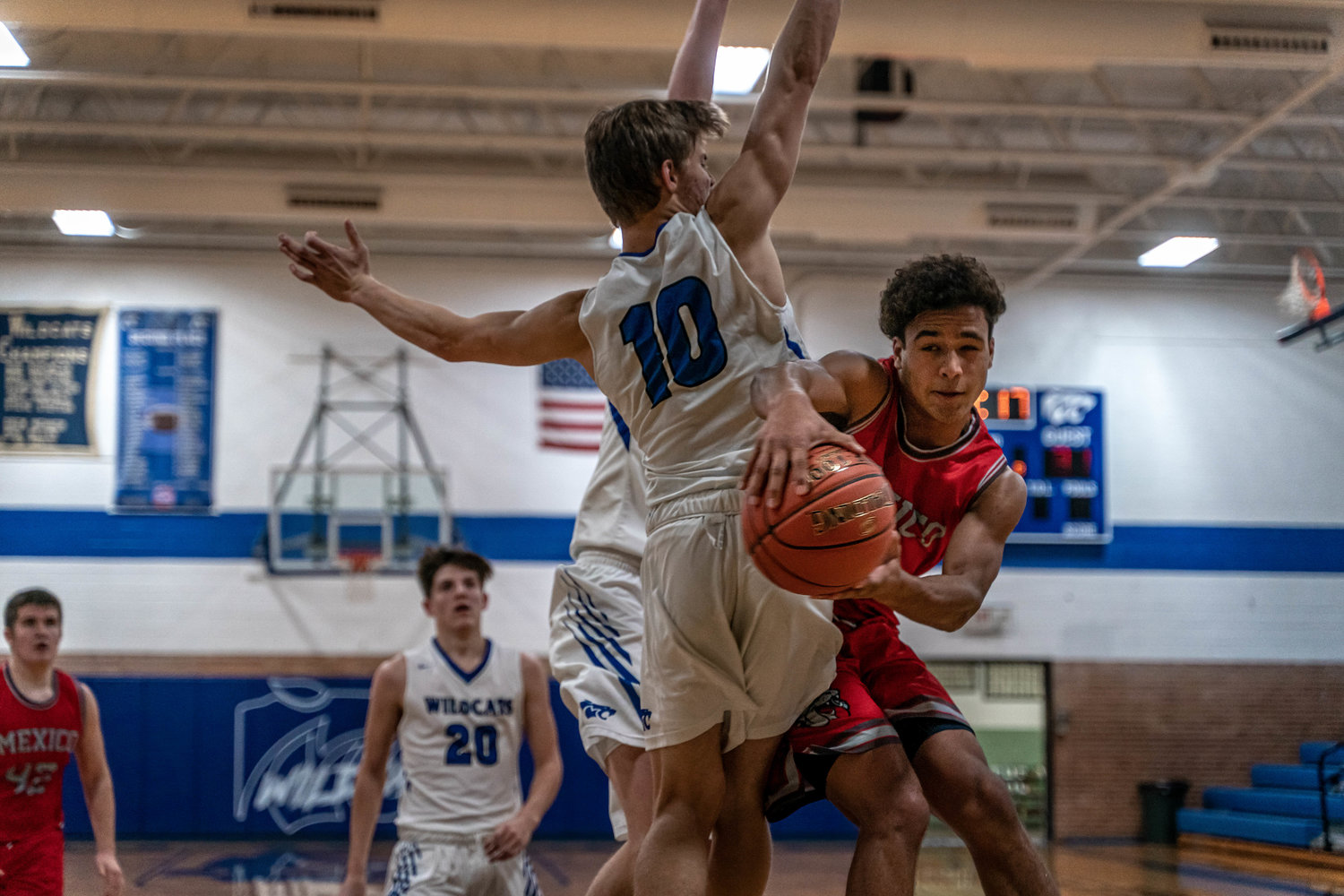 Isaiah Reams battles for the ball against Montgomery County’s Adam Czerniewski during Thursday’s round of that school’s invitational. The Bulldogs took first place in the event, with Reams being named MVP. [Eric Mattson]
Posted Saturday, December 12, 2020 8:30 am
By: Dave Faries, Editor

In the final minute of Saturday’s title game of the Montgomery County Invitational, the only option left for New Haven was to hack away.

By the time Michael White and Blevins again – this time with just six ticks on the clock – added one more each, the Bulldogs had wrapped up a 59-32 win over the Shamrocks and claimed the Montgomery County Invitational title for 2020. As a bonus, Reams was named the event’s Most Valuable Player.

“We worked hard all week as a team in practice,” Reams said. “It paid off.”

The Bulldogs generally charge from the tip off. But the Shamrocks had planned for Mexico’s fast and furious attack.

“We always want to push, but they were playing good defense,” observed Peyton Willer. “They made sure to get back.”

So Mexico had to exercise patience and work the perimeter. Coach Darren Pappas had anticipated this and called on outside shooters to get things started.

After a sloppy start that saw them down 4-0, Yager dropped to the corner and took a baseline pass from Reams, finishing it with a three.

Midway through the opening quarter, Yager went to the line and sank two. New Haven’s Logan Williams answered with a powerful drive into the lane to swap things in the Shamrocks’ favor, 6-5. A moment later Yager plucked a loose ball, found Reams and Mexico led 7-6.

They held the advantage for the rest of the night.

Reams scored 14, Yager and Blevins added 11 each. Willer and Daeye Miller punched in 6.

“It was definitely a team effort,” Pappas said. “All nine guys who played give us great minutes.”

That includes Michael White, who notched 4 points and made his presence felt in the paint all night.

“Michael brings an energy that’s hard to match,” Yager said. “He’s going to give his all.”

Thanks to a Jacob Engelbrecht floater with a plus one at the end of the third, Mexico held a tenuous 35-30 advantage going into the final quarter. And when Reams’ floater was matched by a John Liggett one-hander, the issue was still in doubt.

But Willer and Blevins drained threes to provide a cushion. Miller put a finishing stamp on the game, slapping Engelbrecht’s final shot into the distance.

“Coach says to play to the final buzzer,” Miller said.