It might seem obvious, considering the Bulldogs outpaced Fulton 59-42, running back Dante Billups racked up 194 … 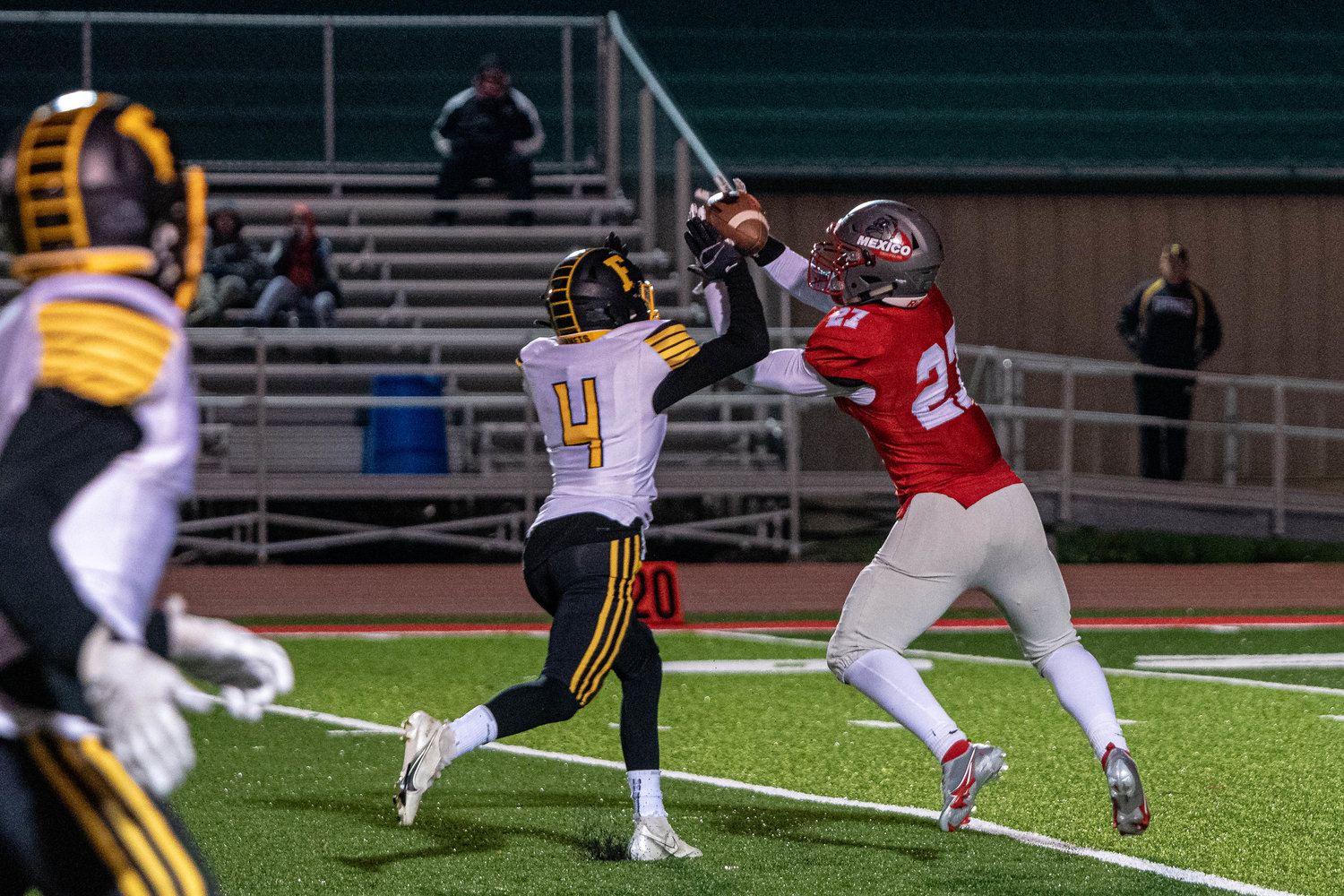 Mexico’s Shannon Dorsey reaches for a Ty Sims pass while trying to elude Fulton’s Will Privia during Friday night’s first round of the district bracket. Dorsey would take the ball to the house for a Bulldogs touchdown. (Eric Mattson)
Posted Thursday, November 5, 2020 9:40 am
By: Dave Faries, Editor

It might seem obvious, considering the Bulldogs outpaced Fulton 59-42, running back Dante Billups racked up 194 yards and three scores on the ground, quarterback Ty Sims threw for 101 and the Hornets’ Courtland Simmons pummeled Mexico with 190 yards rushing and another 126 passing.

But two of the plays instrumental in the final outcome were defensive – sacks by Quinton Campbell and Shannon Dorsey – and one on special teams.

The latter came just after the break and led to a critical Mexico score. Down 32-21, Fulton decided to try an onside kick to start the second half. Dobyns sniffed it out instantly, springing forward to grab the ball out of the air before hitting the turf.

“I thought ‘get to the ground,’” he said. “It gave us good field position.”

From the 50, Mexico put together a 12-play drive capped by a Ty Sims touchdown plunge that erased almost six minutes from the clock and gave the Bulldogs a 39-21 cushion.

With Simmons doing a bit of everything for the visitors, Mexico needed every point they could get. The Hornets responded immediately, Simmons hitting Dustin Hagens for a 58 yard touchdown. The visitors then opted for another onside kick, this time winning possession on the Bulldogs’ 47.

It was Mexico’s defense that again swayed matters. Andrew Runge and Tyler Thoenen chased down Simmons to save a potential score. The line stacked up Fulton running back Davonte Eston. Two miscues added to the Hornets’ woes and the drive fizzled.

“Simmons is a heck of a player,” Mexico’s head coach Steve Haag noted. “You just cross your fingers.”

For a time it appeared as if the Bulldogs’ 39-28 advantage might hold. Neither side managed to put points on the board through the rest of the third quarter and into the fourth. Midway through the final periods, however, Fulton gambled on fourth and goal and were rewarded with a touchdown dive by Josh Reams.

Suddenly clinging to a 39-35 lead, Sims turned to the air, finding Dorsey wide open down the middle of the field. The 49-yard catch and run opened up a more comfortable 45-35 gap.

“That was all my boy Ty,” Dorsey said, giving credit to the Mexico quarterback. Filling in for the injured Ty Prince, Sims went 4 for 7, completing two to Isaiah Reams and one to Jake Haines before Dorsey’s resounding score.

Sims also ran for a couple, including a goal line sneak with 3:35 remaining in the game that increased Mexico’s lead to 52-35. What amounted to the winning score came after Dorsey and Campbell combined to shut down Fulton’s offense moments earlier.

On second and two from the Mexico 34, Simmons dropped back to pass. But Campbell broke through a double team to drop him for an 8 yard loss.

“It was a six-man rush,” the senior lineman explained. “I stayed low and got between the guard and tackle.”

The Hornets tried to get outside with a toss to Reams, but Jaden Hatfield wasn’t fooled and felled the running back before he could get back to the line of scrimmage. On fourth down, Simmons rolled to his left. Dorsey brought him down for another loss, tugging the Fulton playcaller down by his belt.

Mexico tacked on another seven when Billups scored his third TD of the night and Runge added the extra point to put the game away.

Fulton’s touchdown with just two seconds on the clock merely added to the final tally.

“We felt that we could move the ball on them,” Haag said. “It was interesting how it got out of hand.”

Both teams scored on their opening drives. Billups broke two tackles on his way to a 45-yard run to open the floodgates. A fumble recovery by Matt McCurdy ended the visitor’s next possession and led to another Mexico touchdown two minutes later, Anthony Shivers scampering untouched from the 32.

“At first getting the ball outside was key,” Sims pointed out. “We outplayed them on offense.”

Shivers scored twice and carried for 71 yards. Reams raced for 92 and a touchdown. Defensively, the Bulldogs held all non-Simmons Fulton runners to just 69 yards on the night.

The win puts Mexico into the second round of district play. They hit the road on Friday to take on a tough Hannibal squad.

“I really have to step up my game,” Sims said. “If we play our hearts out I think we can win.”