On Tuesday evening the Bulldogs repeatedly threatened to score, but each time were turned away.

But in their 5-0 loss to visiting Marshall, it was Mexico’s ability to create opportunities and … 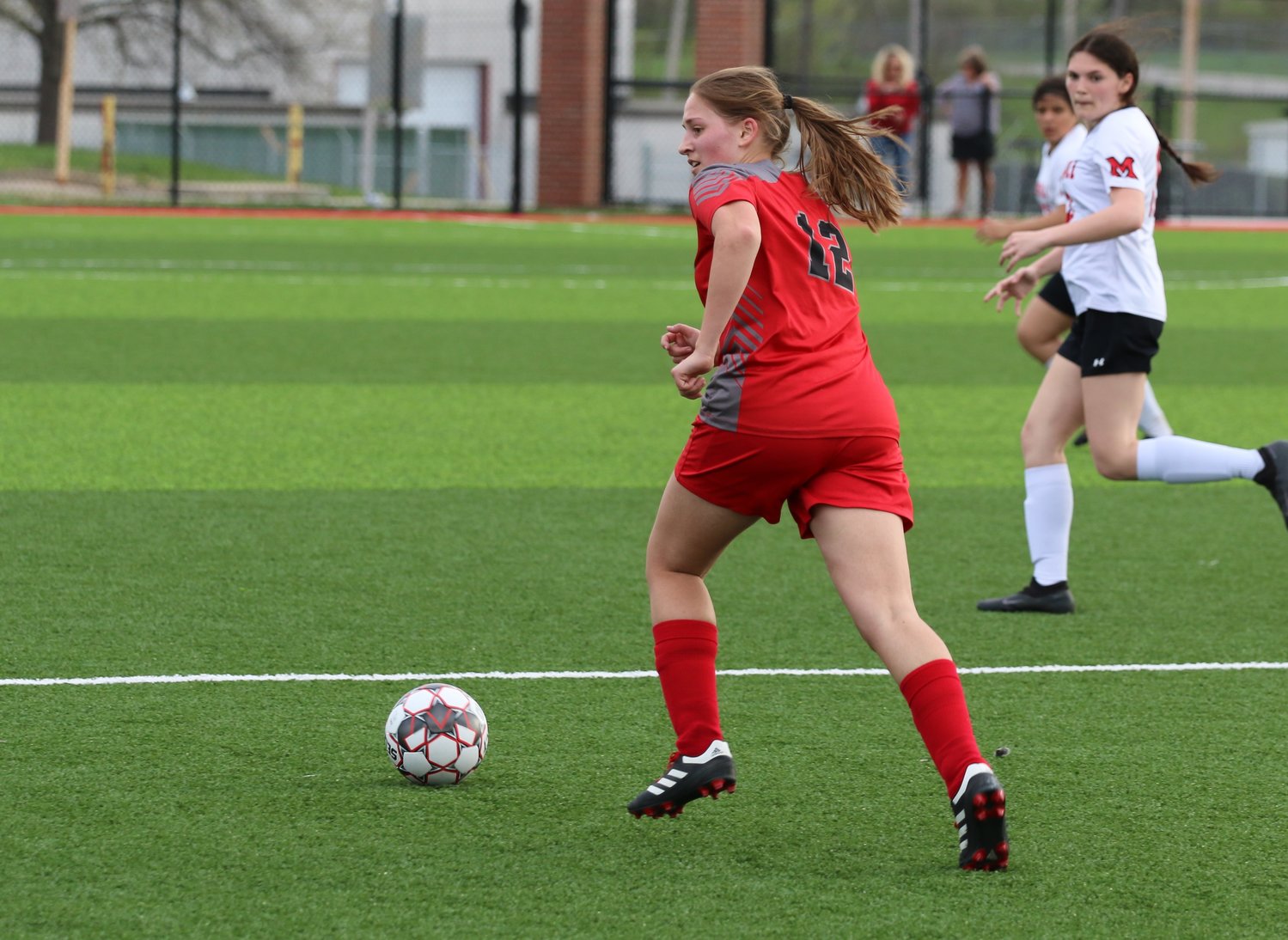 Shelby Kennemore looks for teammates as she goes on the attack against Marshall. The Bulldogs had a strong outing despite losing 5-0. [Dave Faries]
Posted Sunday, April 11, 2021 5:56 pm
By: Dave Faries, Editor

On Tuesday evening the Bulldogs repeatedly threatened to score, but each time were turned away.

But in their 5-0 loss to visiting Marshall, it was Mexico’s ability to create opportunities and move the ball forward that stood out.

“I feel excited,” said striker Estrella Lopez. “We’ve made so much progress over the last month.”

The Bulldogs came into the season with a roster stacked with girls who had never played competitive soccer. And from the start the team struggled to maintain possession.

On Tuesday, however, they looked dangerous from the start. The opening minutes were a back and forth contest, with both defensive lines holding firm.

Katatina Simic put the Owls on top with two well placed goals. Yet Mexico kept probing, looking for a response.

Wyndee Bohr, tasked with the role of creative midfielder, played a ball neatly into space. Lopez claimed it and went on the attack. Moments later defender Lizzie Joiner launched a counter attack, feeding the ball for Bohr to distribute.

“I’m in a new position,” explained Bohr, a former defender. “I’m starting to learn it.”

Bohr was tireless. And with 17:52 to go in the opening half, she slipped a pass through Marshall’s defense and into the 18 yard box. Their effort was nullified when the line judge called offside.

Mexico surged forward again, however. This time it was Shelby Kennemore shepherding Lopez within striking distance.

Early in the second half, Ruby Haefling got a shot off, but it was corralled by Marshall’s keeper. Then Paige Myers had a go with the same result. Bohr and Lopez found each other and put the Owls under pressure once again.

“We really hit it off,” Lopez said of her teammate. “We have real good communication.”

Tessa Haefling had another strong outing, with four more saves in the second half. Bulldogs’ defenders had trouble containing Simic and an own goal padded the final score.

But head coach Haley Schafer’s squad continued to pressure the Owls’ back line. The final 15 minutes were a blur. Samantha Joiner and Lopez fired on goal. Kennemore won a corner, but her subsequent shot veered wide.

And Lopez got in one more on target.

“I feel like we worked better together,” Samantha Joiner said of the step forward. “As a team we all did better.”