Fans of the Bulldogs watched nine balls soar over the outfield fence on Saturday. Four of these came off the bat of third baseman Abby Bellamy – three belted in a 14-6 win over Monroe City in … 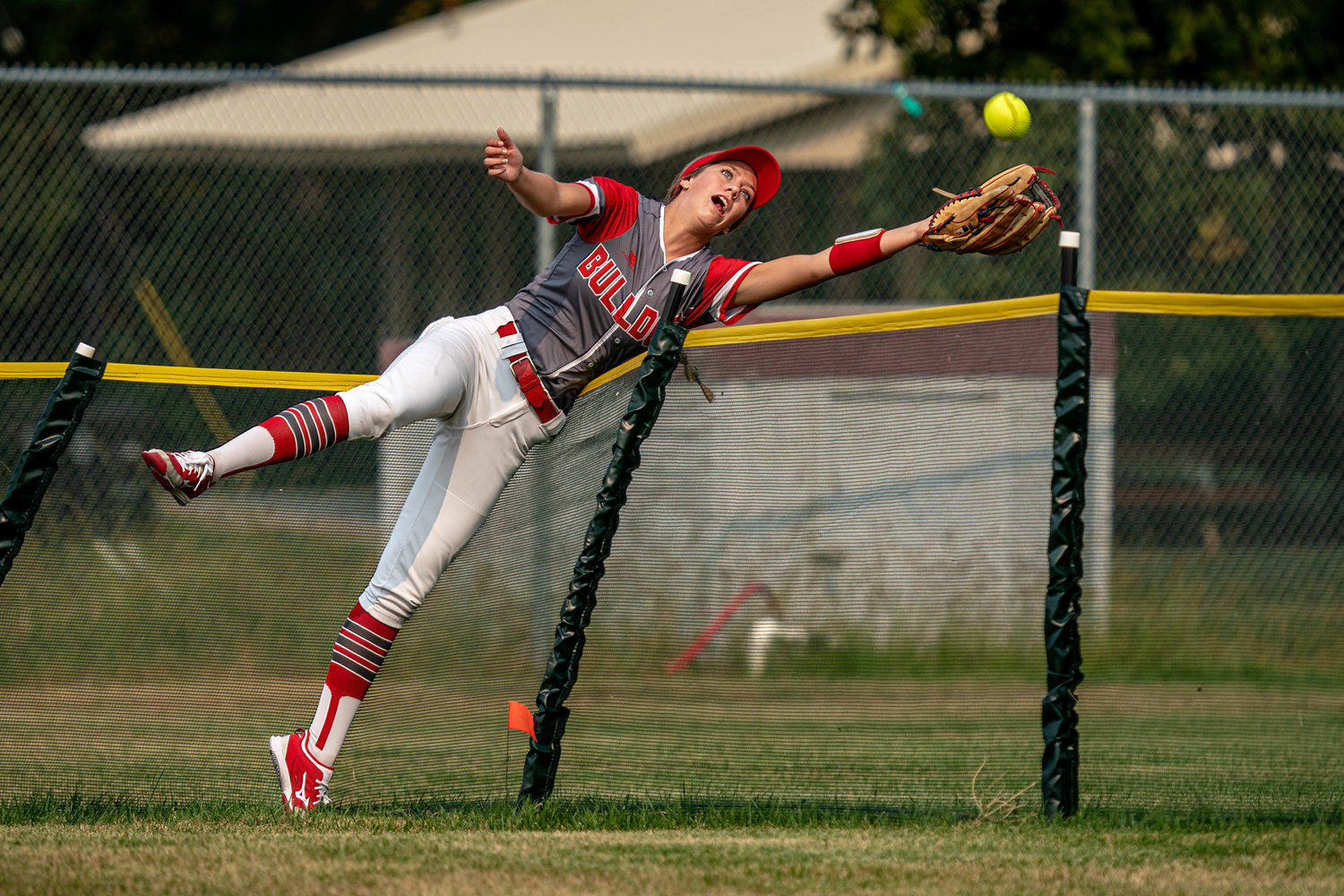 Riley Thurman tries to reach a home run ball in the game against Hallsville on Saturday. The ball fell just beyond her glove. Thurman followed the ball over the fence. [Eric Mattson] 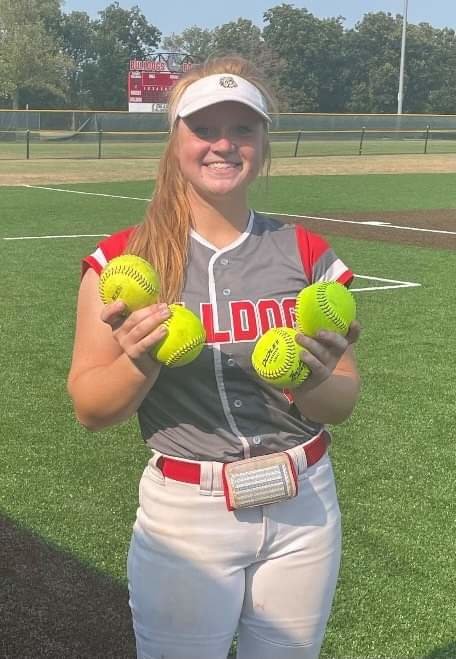 Fans of the Bulldogs watched nine balls soar over the outfield fence on Saturday. Four of these came off the bat of third baseman Abby Bellamy – three belted in a 14-6 win over Monroe City in the nightcap of the Mexico triangular.

Unfortunately for Mexico, another four were hit by the visitors as Hallsville bumped off the Bulldogs 12-4 in the opener at Green Field.

Yet it was a big day at the plate for the Bulldogs’ third sacker. She hammered six hits, scored six times and drove in 10 runs over the two games. Eight RBI were recorded against Monroe City, where Bellamy was repeatedly set up by Riley Thurman.

In the top of the first – Mexico playing the visitors in the triangular schedule’s finale – Thurman led off with a base hit. Bellamy stepped up and smacked a 1-2 pitch to center for a homer.

Thurman reached on an error in the second. Bellamy again drove one over the centerfield fence.

In the seventh, Thurman ripped a double down the right field line. This time Bellamy hammered the ball to right center for yet another two-run blast.

“We’re definitely a good team,” said Bellamy, who is poised to break Mexico’s all time career home run record this season. She needs just three more to move to the top of the list.

Riley Thurman added her own four-bagger, a solo shot to left in the fourth.

“Everyone has a good hit once in a while,” she said, dismissing the feat. “I had some good luck.”

Thurman was 3 for 5 against the Panthers, scoring 4. Bellamy gathered 4 hits in 5 at bats, scored 4 and drove in 8.

Jordyn Thurman and Kierstan Epperson each recorded 2 hits and an RBI.

The nightcap of what had been a solid defensive and all around performance by Mexico ended fittingly. Monroe City had pushed a run across and had a runner, Audri Youngblood, on first with just one out when Adriona White slapped the ball toward short.

Taylor DeMint scooped it cleanly, tossed to Rylee Johnson for the force at second. Johnson’s throw to Epperson was in time for a smoothly executed twin killing.

The result stood in contrast to the opener, both pitched by Jordyn Thurman.

“We made a lot more contact in the second game,” she observed.

As opposing pitchers learned all day, it was a bad idea to allow Riley Thurman to reach base with Bellamy batting behind her.

In the fifth inning of the morning opener against Hallsville, Thurman singled to start the bottom half of the inning. Bellamy then drove the ball over the wall in center.

“I got under the ball,” Bellamy said of the two-run long ball. “I thought it would give us a boost.”

By then the Indians had scored 11 times thanks to four home runs by Edie Cobb, Paige McCord and a pair of shots off the bat of Madysen Lucas. Hallsville would pound out 17 hits.

The Bulldogs fell behind early, but pushed across runs in the first and second to remain within striking distance. A Karlee Sefrit single drove in Abby Bellamy in the opening frame. Taylor DeMint came home on an error in the second.

And there were solid defensive efforts. Ruby Haefling cut down a runner with a throw from right. And Sefrit nailed McCord as she attempted to nab second.

“I was nervous it would be too high,” Sefrit said of her throw. “But they called her out. I finally threw a girl out.”

Riley Thurman, Bellamy, Lexie Willer and Taylor DeMint notched two hits apiece. Thurman had the distinction of falling over the temporary fence in an effort to rob Hallsville of a home run.