Music is a dream realized for Emily (and Friends)

Music is a dream realized for Emily (and Friends) 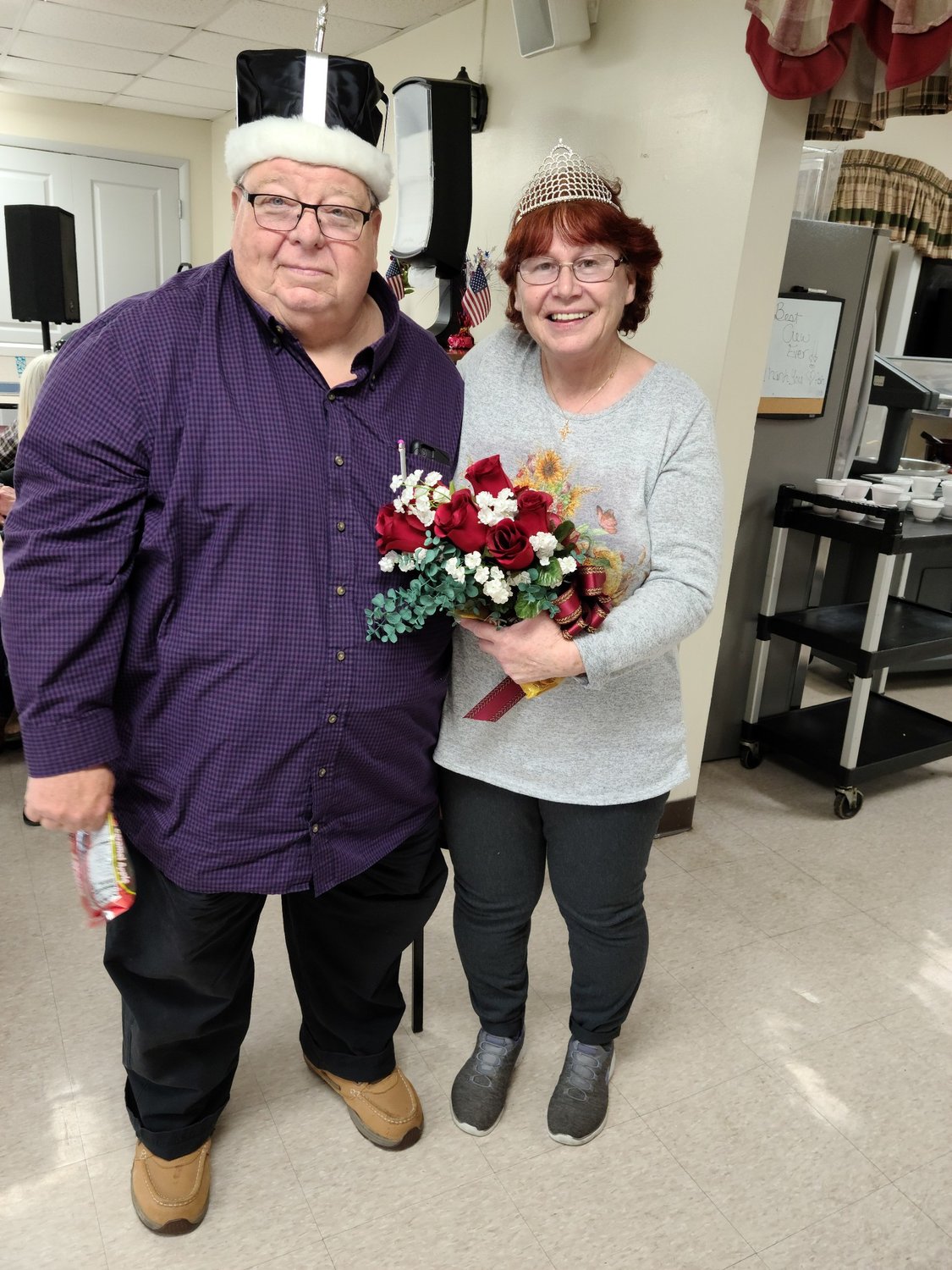 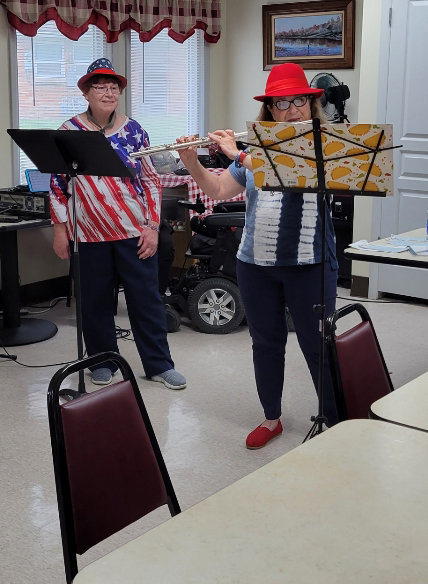 Emily Lain enjoys playing live music at area venues, most notably the Mexico Senior Center. She recently performed for veterans, shown above on saxophone and above right with Barb Miles on flute. Emily's parents were both musicians. Above left, she looks at a photo of her mother, Gloria, who played steel guitar, organ and accordion, as well as gave steel guitar lessons. Her father, Noble, had a lengthy musical career, playing drums, saxophone, mandolin and upright bass. 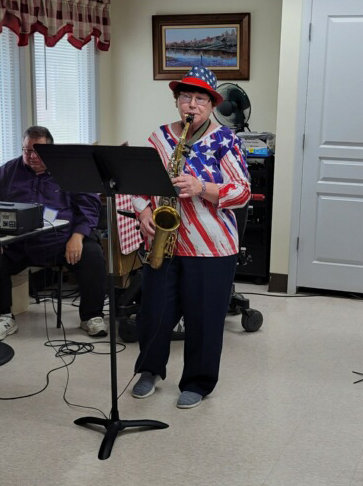 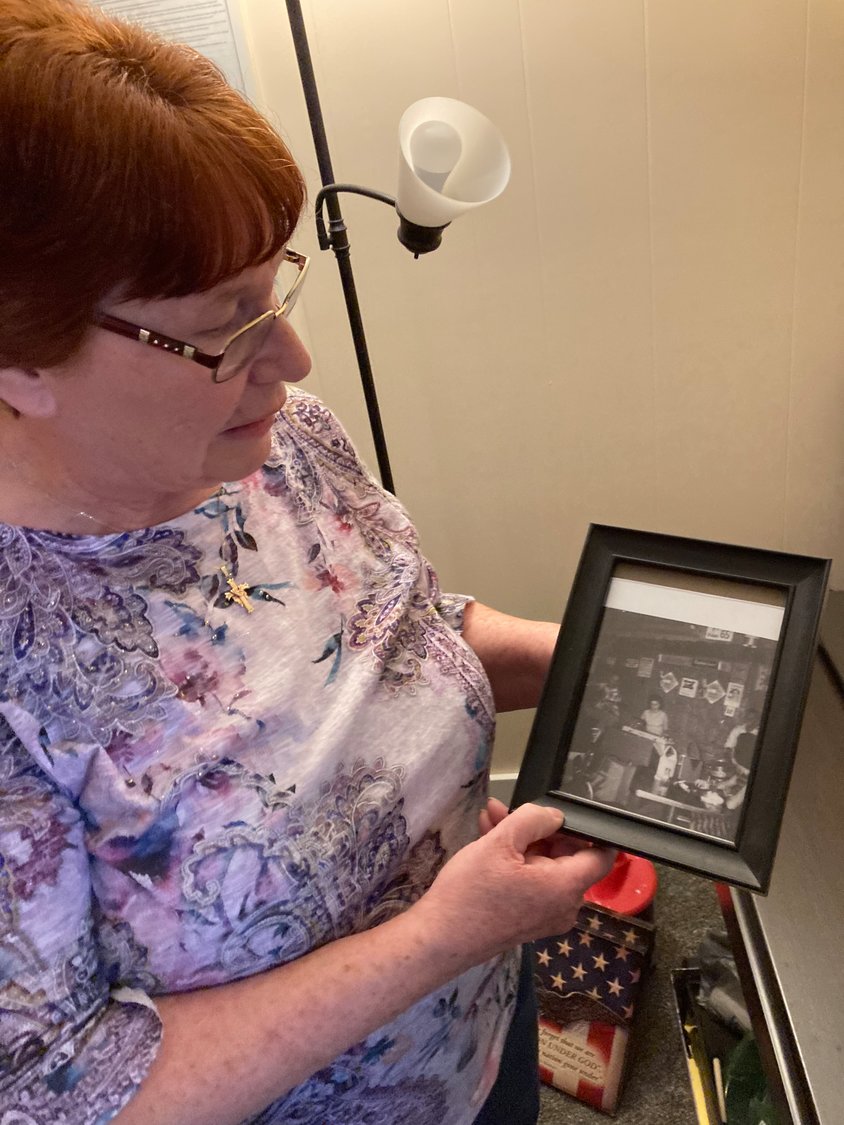 Emily Lain enjoys playing live music at area venues, most notably the Mexico Senior Center. She recently performed for veterans, shown above on saxophone and above right with Barb Miles on flute. Emily's parents were both musicians. Above left, she looks at a photo of her mother, Gloria, who played steel guitar, organ and accordion, as well as gave steel guitar lessons. Her father, Noble, had a lengthy musical career, playing drums, saxophone, mandolin and upright bass.
Previous Next
Posted Monday, November 22, 2021 8:18 pm

“No matter how old you are, follow your dream. Do the best you can do and move on with strength and confidence.””
Emily Lain
By Nathan Lilley, General Manager

The Mexico Senior Center crowned its new king and queen on Wednesday, Oct. 13 as John and Emily Lain succeeded Arlie and Becky Mackey, the outgoing king and queen. True to Senior Center form, it was a peaceful transition, and voters truly couldn’t have selected a finer couple to wear their respective crowns.

John and Emily volunteer at the center, giving their time and effort without reservations, and the center crowd appreciates it. Lives have been upended, compliments of an uninvited pandemic that’s delivered more than its share of uncertainty and risk to all populations, but especially the senior community.

But lives, it seems, are growing closer to normal. The center continues to serve, with dine-in returning some time ago, and there’s always something going on, from pool tournaments and bingo to birthday bashes and live music.

And now you’re talking Emily’s language. After sitting out Veterans Day last year due to the pandemic, Emily Lain and Friends returned to the center and played a variety of classic songs and music from each decade. It was a performance she was happy to give.

Among those in attendance was John, who is her soundman. The two of them married in 2006 and it was John who gave her a birthday gift that would change her life: a saxophone. Emily had expressed interest in music having grown up with parents for musicians.

“I had played a little as a young girl with my dad,” she said.

And as years passed, she found herself thinking about those days; about her parents and about their music.

“I found myself wanting to go home,” Emily said. But there was no one to go home to.”

Music was that outlet and returning to it was a fitting way to honor their memory. And so, she started taking lessons - well, sort of.

“For two years, it sat in the closet,” she said with a laugh. That changed one day after a seemingly not-so-idle threat was made.

“John threatened to use it as a flowerpot.”

With visions of her saxophone sprouting succulents in the front yard, Emily extracted the horn from its rest and started taking lessons. Reflecting on her initial hesitation, she’s gained some perspective over the years.

But overcoming her fear she persevered, seeing music as a way to be close to her late parents, both of whom had played together up until the 1970s. She remembers them practicing at home and cherishes those memories.

Soon after, she too was performing live music. Well, sort of, as she was presented with another challenge when her music teacher told her ‘she had no rhythm.’ But that assessment didn’t deter and Emily kept working.

And in a couple of years she’d found the previously elusive rhythm and would play before live audiences like her parents before her.

Having a long and well-honored career in healthcare and at Boone Hospital Center, she began incorporating music into her patient visits at Boone, And she would share her challenges with those facing rehabilitation.

“I would tell them, ‘If I can learn rhythm, you can learn to walk and talk again’,” she said.

It was a kind of departure for her earlier years of life, as she admits she was much more reserved  in those days, but no longer. She’s now outgoing and is proud to announce she isn’t afraid to try new things. And this year, she got to play before an audience she loves: the veterans. Joined by John as soundman and Barb Miles on flute, Emily Lane and Friends played a varied set of favorites for Veterans Day at the Senior Center, like the Elvis hits “It’s Now or Never” and “Crying in the Chapel”. There were patriotic songs, like “God Bless the USA”, “The Star Spangled Banner,” “God Bless America” and “America the Beautiful.” Woven with the songs were stories of the United States’ war history, like the oldest living veteran, who is approaching 112 years old; the youngest veteran, a 12-year-old who apparently ran away from home to join the Navy, and in general, she thanked all who served.

And she did it through music.

Veterans Day holds a special place for Emily; she had an uncle who served in Vietnam, and prior to working at Boone, she had a stint at the Missouri Veterans Home in St. James. She began playing for veterans at the Harry S. Truman Veterans Hospital in 2012 and it continues to be something she enjoys. She’ll be back at the center Dec. 7 for Pearl Harbor Remembrance Day.

“God has been good to me,” she said, grateful for each opportunity.

She feels her ability to brighten folks’ days with music is truly a gift - a goal achieved. And she uses it as a way to encourage others.

“No matter how old you are, follow your dream,” she said. “Do the best you can do and move on with strength and confidence.”