A week ago, Kendra Murphy had reservations about her team. Now, the Mexico softball head coach has a new outlook.

“They are a lot better right now than what we thought they were going to be,” … 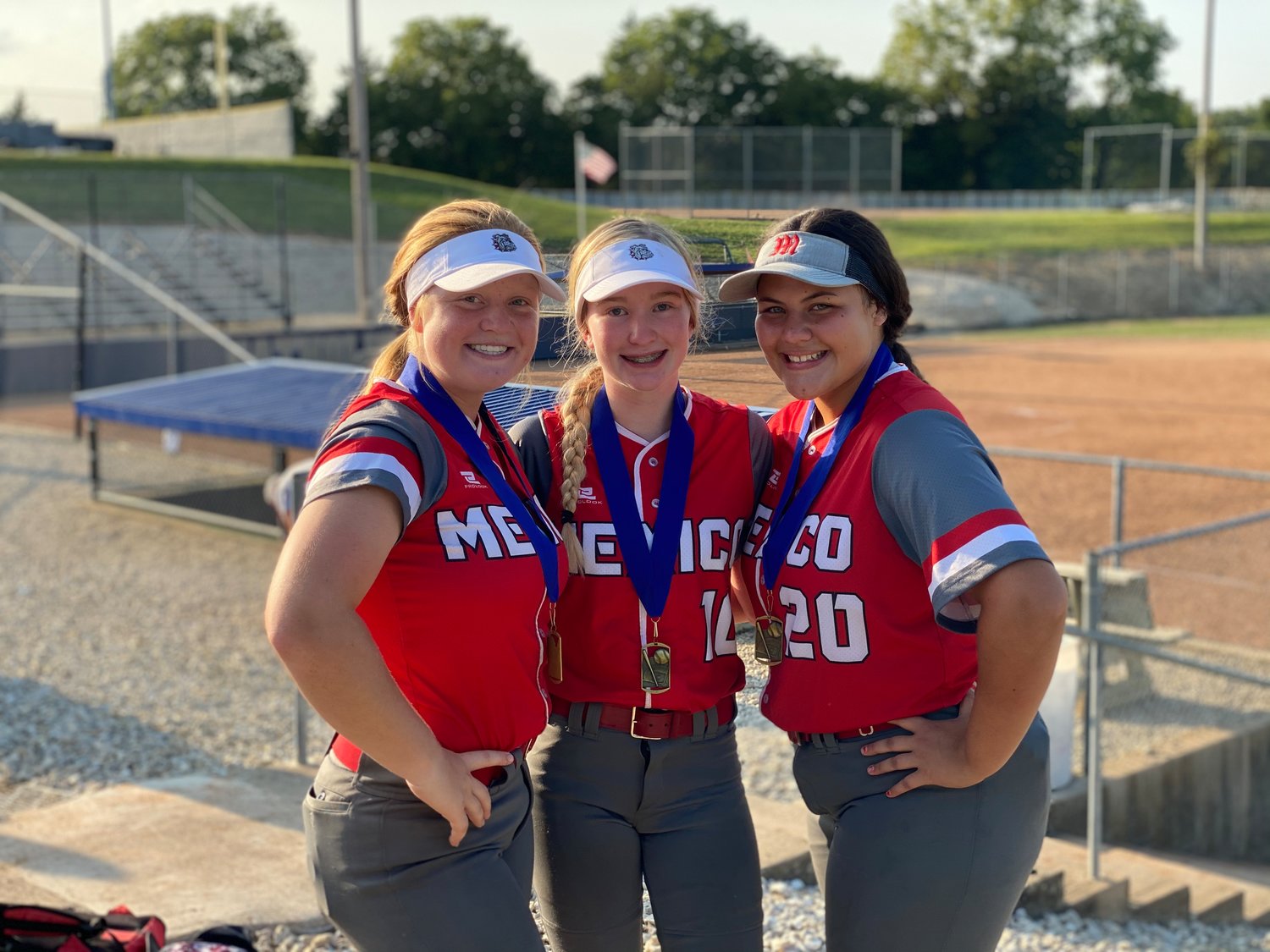 Pictured above are members of the Mexico softball team who were named to the War on the Battlefield all-tournament team. Pictured, from left, are Abby Bellamy, Lexi Willer and Eboni Mayfield. The trio are all sophomores. [Kris Bellamy photo]
Posted Wednesday, September 9, 2020 9:41 am
By: Ben Pfeifer, Correspondent

A week ago, Kendra Murphy had reservations about her team. Now, the Mexico softball head coach has a new outlook.

“They are a lot better right now than what we thought they were going to be,” Murphy said.

After a 5-1 start and a loss to Helias at the War on the Battlefield Tournament, the Bulldogs are exceeding expectations early in this season.

A Mexico softball program accustomed to winning – capturing four district titles in the past five years – headed into the 2020 season with a new head coach and substantial departures to graduation.

The Bulldogs nabbed a victory at Marshall in their season opener, winning 9-8.

The Bulldogs then headed to Jefferson City for the War on the Battlefield, where they found early success, going a perfect 3-0 in pool play on day one.

In Mexico’s opening 4-1 win over Helias, Eboni Mayfield pitched a complete game with no earned runs. Next, the Bulldogs defeated Logan-Rogersville 6-5. This time it was Thurman with a complete game performance. She also went 3-3 at the plate in the comeback victory.

Mexico finished off the day by defeating Fulton. Mayfield pitched her second straight complete game with no earned runs.

In the Bulldogs 9-3 victory over Truman in the semifinals, Mayfield continued her dominance with another complete game and five strikeouts. Sophomore third baseman Abby Bellamy led the Mexico offense, mashing two home runs – one of them a grand slam – with six RBIs.

“We’ve been following Abby pretty closely all summer and that’s something that she’s shown on her travel teams that she has that power,” Murphy said.

Mexico fell short in the title game to Helias, falling 3-0. Murphy was happy with her team’s performance, though, especially that of Thurman in the circle.

After her team’s blazing start, Murphy is pleased with her pitching, especially of Mayfield’s play. Mayfield earned all-tournament honors this past weekend.

Murphy calls Thurman and Mayfield her ‘two number ones’ in the circle. Mayfield’s emergence means Murphy can rest Thurman, who is dealing with back issues, and have the same level of success.

Mayfield on the mound also allows Thurman to slide back into the outfield and into the lineup.

Murphy knows her team has to improve in some areas. The Bulldogs left too many runners on base against Helias in the championship.

This scorching start has assured to Murphy that this young, athletic team has what it takes to compete for a district championship.

“I’ve heard other schools in our conference talk and they don’t anticipate us being one of the teams competing for the conference championship this year because of how many seniors that we graduated last year,” Murphy said. “That’s going to come as a big shock to a lot of people when they see how good we are.”