If it’s possible to be pleased and disappointed at the same time, that was the state of Mexico’s girls after Saturday night’s championship match of the Montgomery County Invitational. 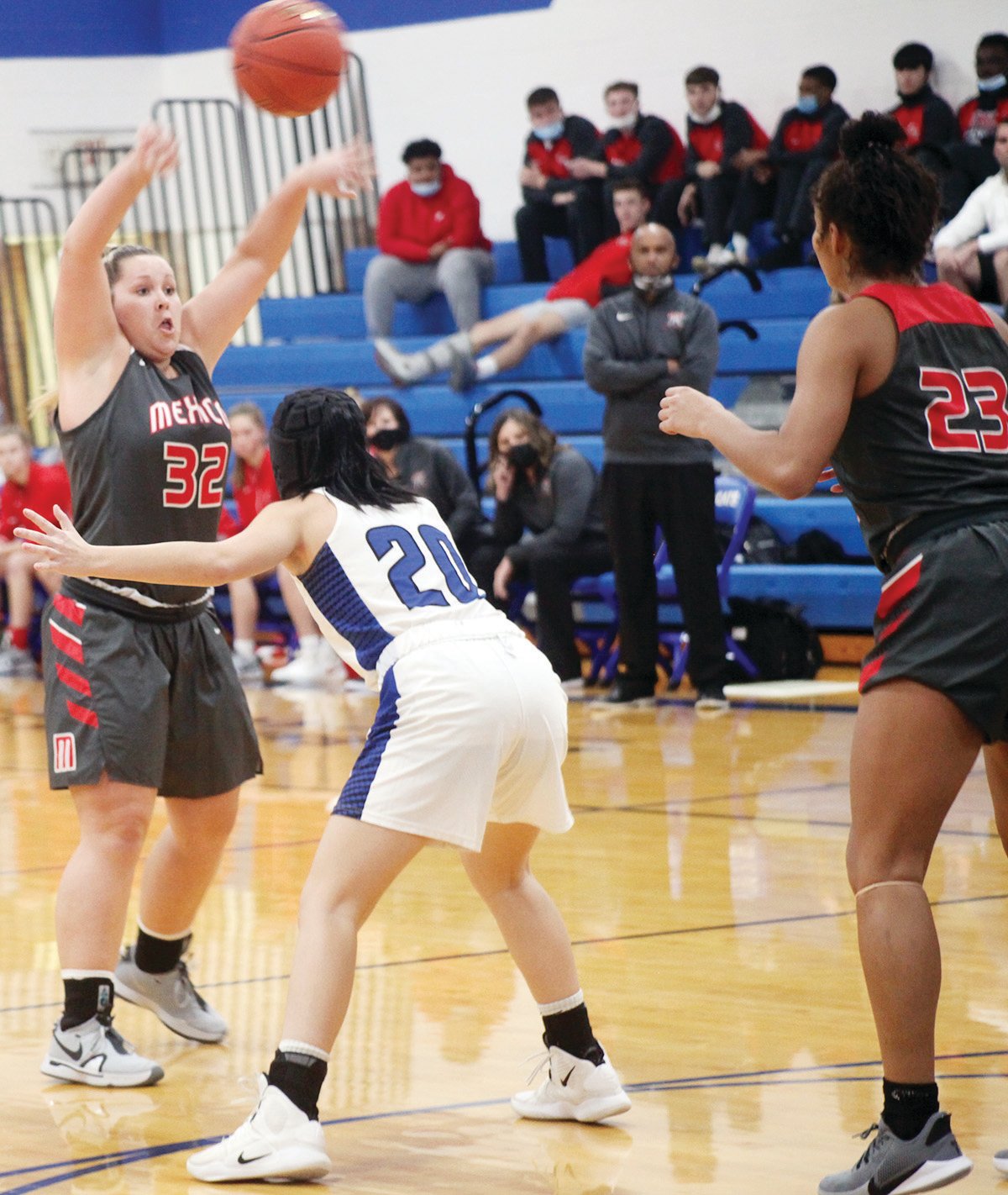 If it’s possible to be pleased and disappointed at the same time, that was the state of Mexico’s girls after Saturday night’s championship match of the Montgomery County Invitational.

And yet the Bulldogs never allowed the bigger, more experienced Hermann squad to shake free. When the Bearcats jumped out to a quick 7-2 lead, Oetting wiped it out with a three. Down 29-18 at the half, Mexico responded with a driving bucket by Oetting – the lone senior on head coach Ed Costley’s roster – set up by a Mya Miller dish, followed by another from Oetting in the key and a long three pointer from Riley Blevins.

Hermann started the final quarter with a 39-27 advantage, but Alexis Willer from beyond the arc and Riley Thurman battling under the net sliced into that gap. And Willer converted a Blevins steal into two more points before Hermann could get back on the scoreboard.

“I’m always looking ahead – down the floor,” Willer said of the fast break goal with 3:50 to play.

Two minutes later Taylor DeMint dropped back to back threes to make it a tight 44-41 contest. The first came with an assist from Willer and hit nothing but net. The second rewarded a Miller defensive rebound and flicked off the glass.

“My shot is starting to come back,” DeMint observed. “The second shot, we needed it.”

In the final minute, however, Hermann’s Grace Winkelmann took over. She outscored the Bulldogs 6-2.

Loaded with size and seniors – six, compared to Mexico’s one – the Bearcats tried to take command early on. Mexico constantly prowled the perimeter, looking to create chances for Miller in the paint.

Oetting lofted one in from five feet out late in the first, taking a pass from Willer and launching forward.

“I drove to the basket and hoped it would go in,” she said. Willer backed her up with a three and a short jumper, giving the Bulldogs a 12-9 first quarter lead.

One quarter determined the outcome on Saturday night, however. Two free throws by Riley Thurman and a Blevins lay in were the only points Mexico managed in the second frame. Meanwhile five different Bobcats scored as Hermann dominated 15-5.

“They set the tone physically inside,” Mexico head coach Ed Costley pointed out.

Willer was the only Bulldog in double digits, putting a dozen on the board. Oetting tacked on 9, while Thurman (7), DeMint (6) and Blevins (5) battled alongside.

Miller drew a lot of defensive attention and was limited to 4 points.