T-Birds knock off Montgomery County, improve to 3-0 in EMO

North Callaway junior Matthew Weber tries to get past Montgomery County’s Keenan James in the third quarter in an Eastern Missouri Conference contest between both teams on Dec. 30. Weber …

T-Birds knock off Montgomery County, improve to 3-0 in EMO 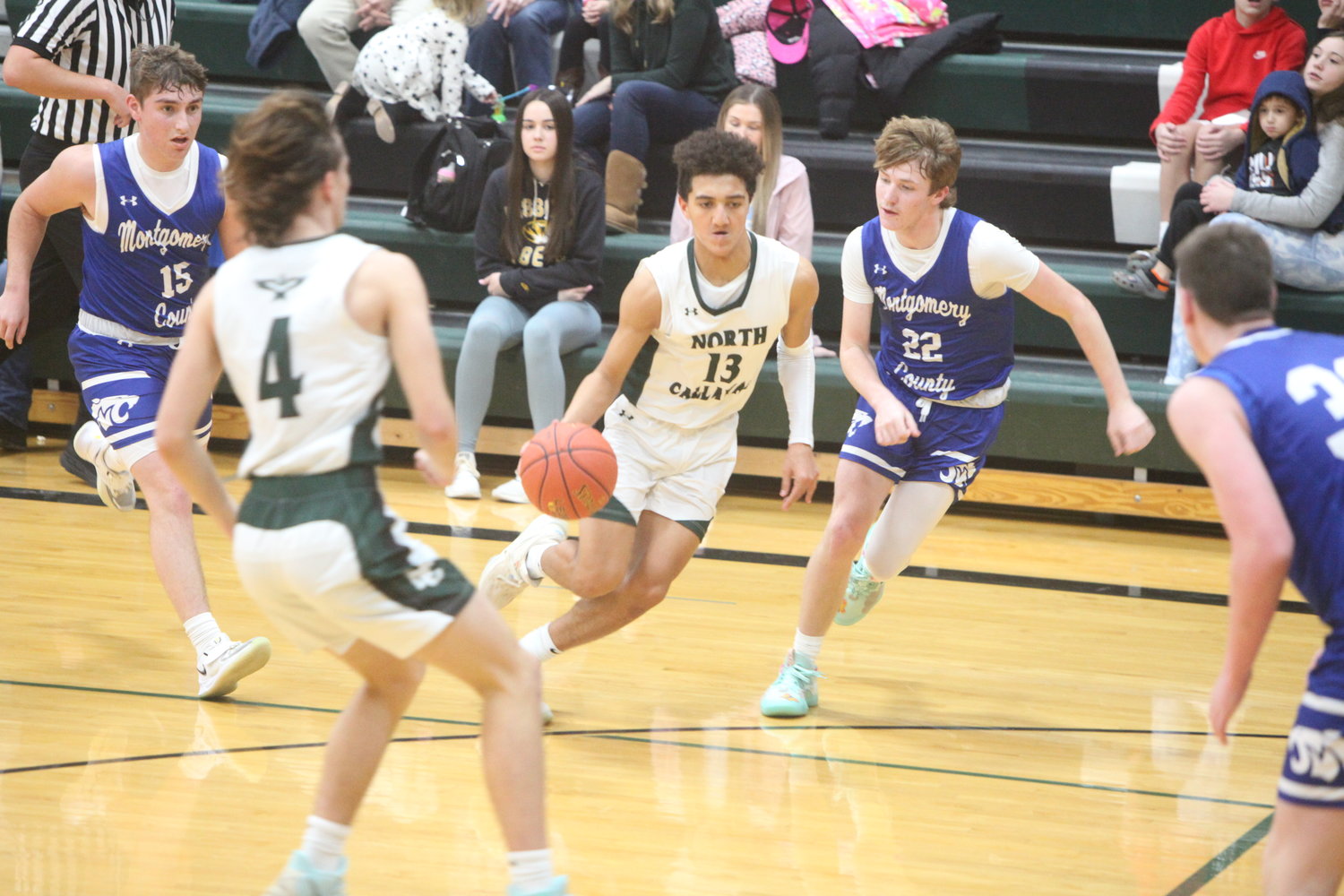 North Callaway junior Matthew Weber tries to get past Montgomery County’s Keenan James in the third quarter in an Eastern Missouri Conference contest between both teams on Dec. 30. Weber and the Thunderbirds beat the Wildcats 55-44 to improve to 3-0 in conference play. [Theo Tate Photo]
Posted Wednesday, January 5, 2022 10:19 am

The North Callaway boys basketball team is off to a blazing start in Eastern Missouri Conference play.

The Thunderbirds improved to 3-0 in league play after beating the Montgomery County Wildcats 55-44 on Dec. 30 at home. North Callaway also had conference wins over Silex and Van-Far.

Now, the Kingdom City school is hoping to celebrate the New Year with its 10th conference championship in program history and its first since 2019.

“The last couple of years, we were in the top half of the conference,” North Callaway coach Matt Miller said. “But we want to be up there in the last week of the conference season in February competing for a conference championship. Winning a game like this (against Montgomery County) in December goes a long way towards that, for sure.”

The Thunderbirds knocked off a Montgomery County team that won the EMO championship in each of the last two years and had a 22-game conference winning streak that was snapped with a loss to Wellsville-Middletown on Dec. 17.

“That was a good conference win for us,” Miller said. “We didn’t play well in our last game against Hallsville. I was really proud of the way our boys bounced back against a good, solid Montgomery team.”

North Callaway stormed to an 18-6 lead midway in the second quarter. MCHS rallied to tie it at 41-41 midway in the fourth quarter before the Thunderbirds closed out the game with a 14-3 run.

Junior Matthew Weber, a second-team all-EMO selection last year, finished with 23 points, including 16 in the second half, to lead the Thunderbirds. He scored eight points in the final three minutes of the game.

“The thing I liked about him is he is under control,” Miller said. “There are some nights when he’s forcing the action and taking some bad shots. I thought he was aggressive while not forcing things that weren’t there. He has a scorer’s mentality.”

North Callaway’s next conference game will be against Wellsville-Middletown on Jan. 18 on the road. The Thunderbirds also have Clopton (Jan. 21), Elsberry (Feb. 4), Wright City (Feb. 8), Louisiana (Feb. 9), Mark Twain (Feb. 15) and Bowling Green (Feb. 17) left on their EMO schedule.

Miller said the race for the EMO title is still wide open.

“There really are no easy outs,” the North Callaway coach said. “Louisiana is really solid. Elsberry is coming up and they’re solid this year. We’ll play a Wellsville-Middletown team that knocked off Montgomery. They’re tough and hard to handle, too. That’s the tip of the iceberg. It’s tough night in and night out.”

North Callaway took a 5-3 record into its game against South Callaway on Jan. 4. The Thunderbirds are looking to finish with their fifth winning season in six years. They finished 13-14 last year.

“We just have to believe in the process and that’s one day at a time, one practice at a time and one game at a time,” Miller said. “We’re a pretty young basketball team.”

The Thunderbirds will play Montgomery County again at 7:30 p.m. on Jan. 11 in a first-round game of the South Callaway Tournament.

“Playing these guys again won’t be easy,” Miller said. “I know (Montgomery coach) Scott (Kroeger). He’ll have some wrinkles and adjustments for us. But we’re excited about this big conference win, for sure.”