A time-honored precept declares that it is near impossible to beat a team three times in one season. And the Bulldogs entered Tuesday night’s district finals with two wins against … 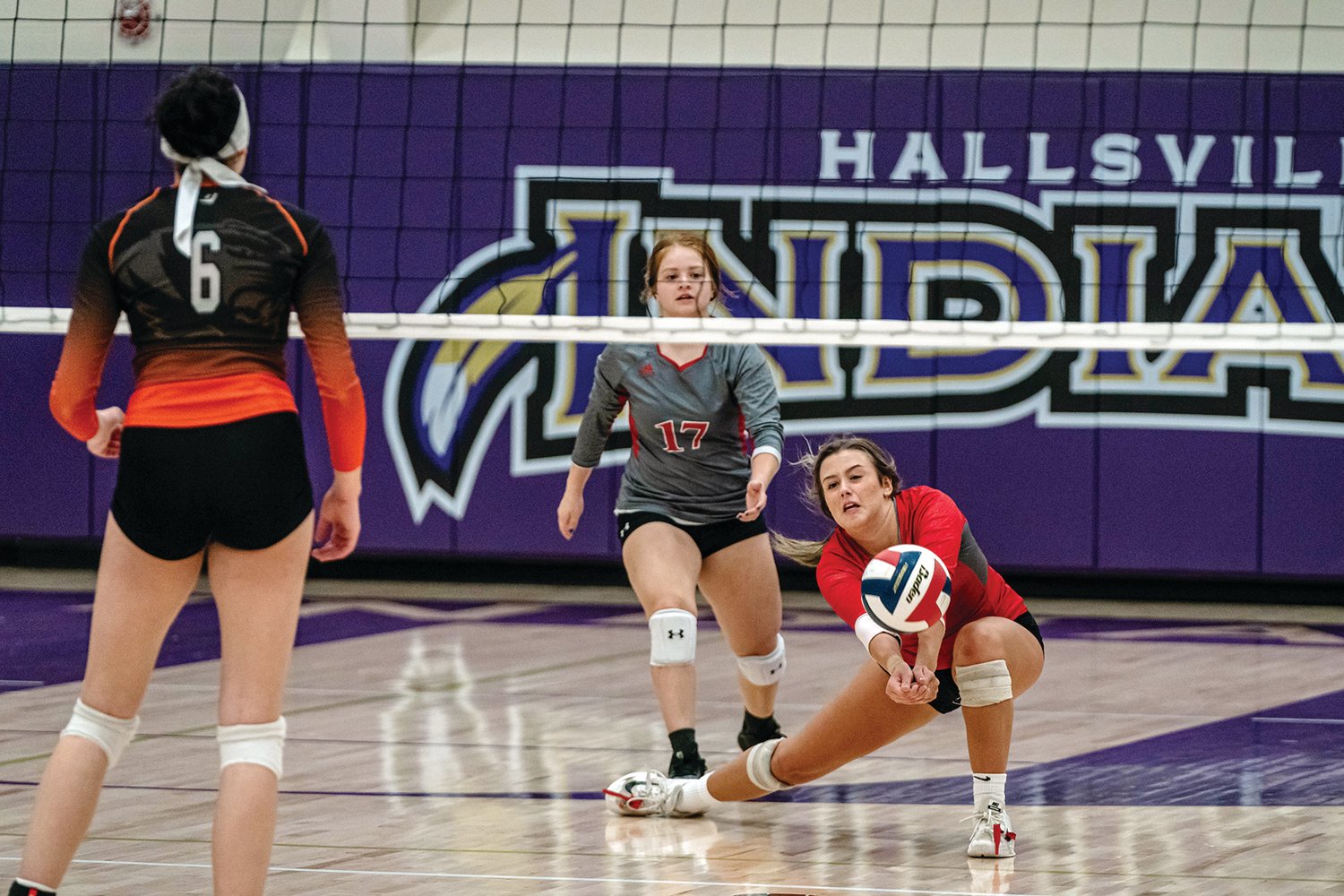 Addison McCoy hits the floor to dig out a Kirksville shot as Nayeli Ruiz hurries in for support during Tuesday night’s district final. The Bulldogs fought hard, but fell 3-1. (Eric Mattson)
Posted Monday, November 2, 2020 10:53 am
By: Dave Faries, Editor

A time-honored precept declares that it is near impossible to beat a team three times in one season. And the Bulldogs entered Tuesday night’s district finals with two wins against Kirksville.

But Addison McCoy doesn’t believe in adages. So the senior outside hitter and her Mexico teammates hurled themselves across the court, banged at the net, dug, clawed and fought with everything they had.

“I know this team left it all on the court,” McCoy said.

The finale provided some memorable volleyball. Down 13-6, and still reeling from a sluggish third set, the Bulldogs began to pull themselves back. Mya Miller slashing hit sparked the rally. Miller and Riley Blevins then held firm at the net, blocking a spike by the Tigers’ Emily Middleton.

Middleton had been the Bulldogs’ nemesis all night, but as the fourth set Mexico started hitting the mute button – and ramping up the volume on their own side of the court. At 14-9, Jessica made a lunging save that Kirksville couldn’t return. Moments later, Nayeli Ruiz’s hustling, overhead bump led to another point. After two of Miller’s deft taps, a clever play by Emily Nunan, the Bulldogs closed in thanks to a bit of improvisation.

McCoy heaved herself at the net to block a shot. The ball careened off her arms toward Nunan, who reacted quickly, popping the ball up. Intended as a pass, it ended up as a point when the bump fell through a trio of startled Tigers.

“Honestly it’s just a reaction – three years of the coach drilling it into you,” she explained.

Lizzie Joiner stepped to the service line and beat Kirkville’s Corinne Vorkink for an ace. Mexico won the next two exchanges, taking a 21-19 lead.

The Bulldogs held on. Jessica Stephens pounded the ball past the Tigers’ Malea Nelson to make it 23-21.

But that was it. Kirksville rung up the final four points.

Yet the second place finish in Missouri’s class 3, district 7 tournament was Mexico’s outcome in years. There was little disappointment in the aftermath.

The Bulldogs’ work ethic was evident throughout the evening. McCoy, Ruiz and Ally Wilson went sprawling across the floor on many occasions in an effort to save a point. A diving dig by Stephens in the first set that led to a hard chop and point by Miller. Mexico’s 25-23 win in set two was settled by a series of furious exchanges. With the score at 20-17, Nunan and McCoy rose to block one shot. The Tigers hammered the ball right back, but Nunan was there for the kill.

When Kirkville managed to knot things at 23-all, the Bulldogs responded with a set piece, Ruiz to Wilson to Stephens, who directed the ball between two defenders.

McCoy secured the victory in a face off at the net.

In the lopsided third set, Ruiz and Wilson scrambled to keep volleys going. Capri’ Ona Fountain scythed one through two lines of Tigers. Nunan and Blevins held Kirksville at 15 for four consecutive serves.

The pair, along with Miller, revived the team’s front line fortunes in the final set.

“She likes to keep me accountable,” Nunan added.

Mexico blanks Centralia in opening round

It was a 3-0 sweep for Mexico. But it played out like a battle between a two and three seed – taught and uncertain.

Seeded number two, the Bulldogs took the first set of the district tournament 25-17. But neither side could gain the upper hand until midway through the match, when Mya Miller and Capri’Ona Fountain took charge of the net, killing off a Panthers rally. Jessica Stephens and Ally Wilson worked the ball to Miller on the ensuing serve. The junior middle blocker buried the ball on Centralia’s side of the floor. Wilson then finished off the next exchange with a finger roll to make it 11-9. Mexico never surrendered the lead from that point.

But Centralia never went away. Staked to an apparently comfortable 20-12 margin in set two thanks to the efforts of Emily Nunan, Riley Blevins, the ever present Miller – as well as some scrambling by Lizzie Joiner to keep a ball alive – Mexico had to work to fend off a Panthers challenge.

Addison McCoy put things away with a one-handed swing to cap a 25-16 victory.

The third set, however, was a back and forth affair throughout.

“We knew Centralia was on a high,” said senior deep setter Nayeli Ruiz. “They had beaten Kirksville.”

The scoreline reflects the anxiousness of the action, as 10-8 became 10-10, 10-13 rebounded to 13-all. At 18-15 after McCoy delivered a lob to an empty space just inside the line, Mexico looked poised to pull away. And when back to back scores by Blevins and Nunan stretched it to 22-17, a sweep seemed certain.

But the Bulldogs struggled to deal with Centralia’s Morgan Ross, who ticked off five points from the line to put the Panthers on top before launching one long. The score was locked at 23 and 24.

The junior flew to the net, tapping one over to give the Bulldogs a 25-24 edge. Moments later she lofted a shot over Centralia’s front line for the winner.

“My heart was pounding,” McCoy said of the nervous moments until Miller wrapped things up.

Mexico wrapped up the 2020 campaign at 9-14, but with a district podium after a spirited fight for the title.

“It’s always been a battle with them,” Miller said of Kirksville.

The Bulldogs fielded a young squad all season. They are losing only two seniors – Ruiz and McCoy. And coach Tutt says after a strong postseason showing this year, things look promising for 2021.

As for what the seniors will recall from their final year, McCoy summed it up. “Definitely the girls on the team and how hard they work,” she said.