When Mexico took a 14-0 lead early in the second quarter on Dante Billups’ 11-yard sprint, things looked promising for the Bulldogs. When Isaiah Reams raced across the goal line to open the third … 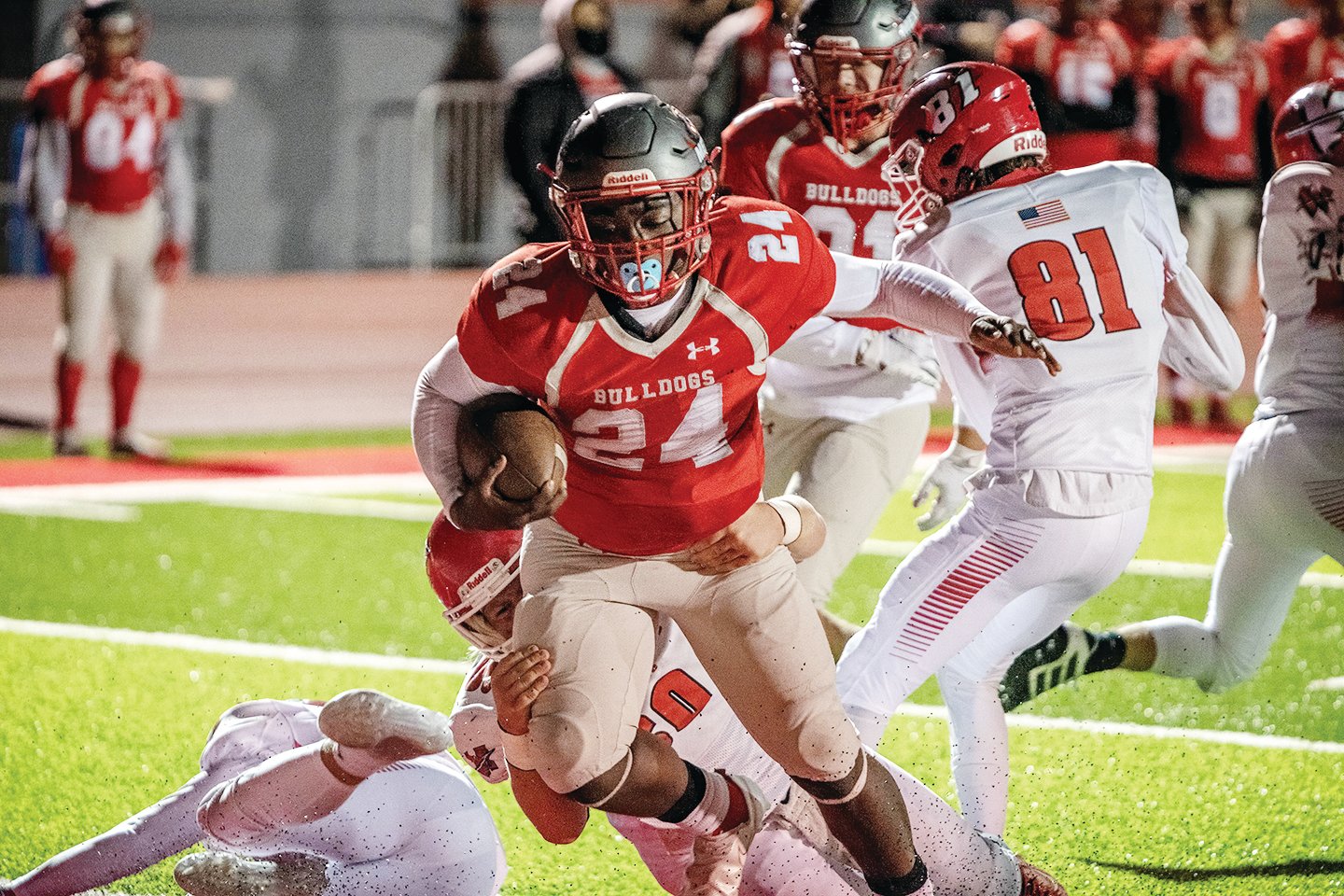 When Mexico took a 14-0 lead early in the second quarter on Dante Billups’ 11-yard sprint, things looked promising for the Bulldogs. When Isaiah Reams raced across the goal line to open the third quarter and improve the advantage to 20-7, victory seemed likely. And when Ty Prince cruised through a big hole for a 57-yard score as time expired in the third, the Bulldogs’ 26-14 lead felt even more secure.

But two late scores by Warrenton on Friday night in Mexico – the last covering 76 yards with just 2:14 remaining in the game – erased any optimism. The Bulldogs stumbled in the final regular season appearance, 29-26.

“I felt like we were in the right spot,” defensive back Peyton Willer observed. “But we made a lot of mistakes – stuff that shouldn’t happen.”

Two fumbles and some costly penalties did not help Mexico’s cause. Yet for much of the night, the team was clicking on both sides of the ball. Billups bulled his way to the end zone from six yards out to open the scoring. He tacked on another touchdown in the second with 11:19 on the clock, this time touched only by Warrenton’s Kolby Meine. Meanwhile the defense shut down the Warriors’ running game. And when the visitors turned to the air just before halftime, Jesse Fennewald dragged down wide receiver Logan Lindemann well short of a first down.

Facing a 4th and 5 from their own 39, Warrenton decided on a fake punt. But Willer wasn’t fooled. He dropped the ball carrier and Mexico ran out the clock.

Up 14-7 to start the second half, Billups set up the Bulldogs’ next score. Behind solid blocking, he ripped up the middle for 25 yards on the first play from scrimmage. From there Prince moved the ball inside the 10, where Reams took over – reaching the end zone thanks to a thundering block by Quinton Campbell.

“I was just supposed to kick him out,” Campball said of the hit that freed Reams. “We got the touchdown.”

Even when the Warriors turned almost exclusively to the passing game, Mexico was able to respond. The Warriors moved into Bulldogs territory on their first possession of the half. But the defense stiffened – Willer delivering a blow on receiver Shane Brosenne for no gain, Deacon Haag sacking Caelon Weir and Morgan Grubb teaming with Shannon Dorsey to force the strong-armed quarterback into a hurried throw that fell incomplete.

But the aerial assault continued and began to pay benefits for the visitors. Warrenton closed the game to 26-21 with 4:41 to go in the game. They took the lead two minutes later.

“We weren’t ready – that is my fault,” Mexico head coach Steve Haag explained. “We haven’t done well covering the pass all year.”

In the meantime, Prince limped off the field, turning Mexico’s comeback hopes over to back up quarterback Ty Sims.

In the waning moments, Sims found Reams for a 14 yard completion. But the next three tosses fell incomplete.

Mexico takes on a familiar foe – Warrenton – on the road Friday in district play.