Faithful service is the watchword for the ministry of Jerry Ostrom, pastor of Farber Baptist Church. Ostrom was ordained at Rock Port Baptist Church on August 14, 1960, shortly after he began serving … 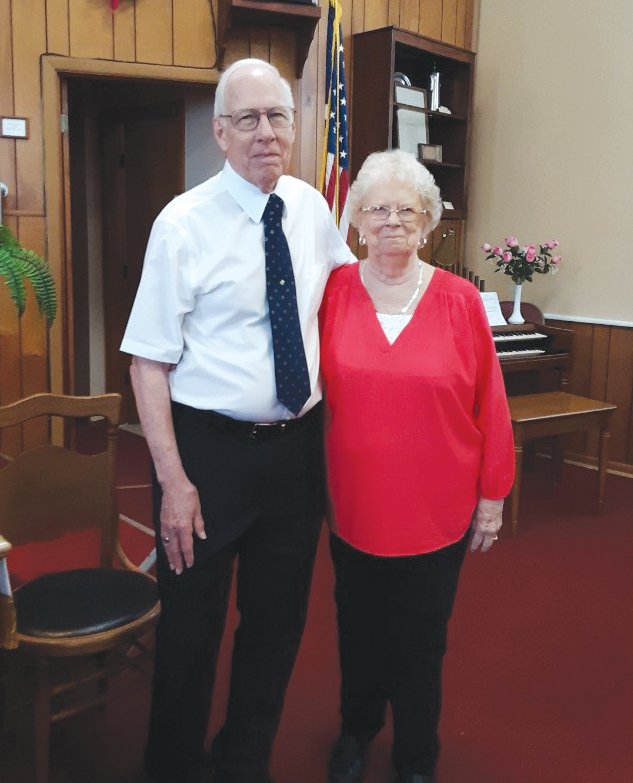 Faithful service is the watchword for the ministry of Jerry Ostrom, pastor of Farber Baptist Church. Ostrom was ordained at Rock Port Baptist Church on August 14, 1960, shortly after he began serving the church as pastor.

“I was so green when I started after graduating college (William Jewell) and seminary (Southern),” Ostrom said, “but God guided us along.”

Ostrom and his wife, Jackie, recently celebrated their sixty-third wedding anniversary. She agreed with her husband, “God blessed us and took care of us.”

The Ostroms have two daughters who both learned caring at home. Joy Beary, member of Bethel Baptist Church, works in daycare at FBC Independence and Janis Newbold works for Missouri Protection and Advocacy Services, a nonprofit serving and advocating for the disabled. Janis is married to Brad Newbold, Worship Pastor at Concord Baptist Church, Jefferson City.

After serving seven years at Rock Port, the Ostroms moved to Mexico. Ostrom became the pastor of Centennial Baptist Church where he served 34 years before he “retired” in 2001.

“Retired is always said with a laugh,” Ostrom said. “After I left Centennial, I became a supply pastor for others from 2002-2006. Then, in 2006, I became the pastor of Farber Baptist Church, and I’m still there.”

Longevity at a ministry location is a strength of Ostrom’s ministry. Brad Newbold describes his father-in-law’s call, “Jerry is not naturally outgoing, but when God called him, it was a radical transformation. His ministry is not personality driven, but it is driven by the Holy Spirit.”

Ostrom said that serving several years at one church is a blessing. “I was able to see individuals grow in Christ,” he said. “You don’t see that in a short-term ministry. I was able to baptize three generations in one family and marry couples in two generations of another.”

Ostrom said he found listening to the expertise within his congregations was always a positive experience.

“I would advise younger pastors to not lead too fast,” he said. “It is so important to keep people in the process.”

One of the successful programs at Centennial was the Blessings Fair. “The congregation gathered clothing and other items needed by the community,” he said. “We made it fun by serving snacks and drinks to those who came. Some people who came couldn’t believe that all of this was free and some even left a contribution though it was not expected.”

Ostrom was extremely active in the Mexico community. He held many offices in the Mexico Ministerial Alliance. He served in many positions in the Audrain Baptist Association. He was the Volunteer Chaplain for Hospice of Audrain County Missouri and the Volunteer Chaplain at Audrain Medical Center. He also led a group called Spiritual Issues for the psychiatric unit at the Audrain Medical Center. Ostrom also taught seminary extension classes for several years in Mexico.

In his years at Farber Baptist Church, Ostrom travels about 25 miles each way to speak. “The deacons handle the business and other important activities. I’m in more of a part-time position, but God led a new young family to us.”

According to Newbold, God’s guidance is the focus of Ostrom. “He is a great mentor to me,” he said, “as well as other young and older pastors. The joys are real, and the struggles are real. When he got God’s call to minister, he didn’t let difficult days push Him aside. He is a Holy Spirit inspired leader.”