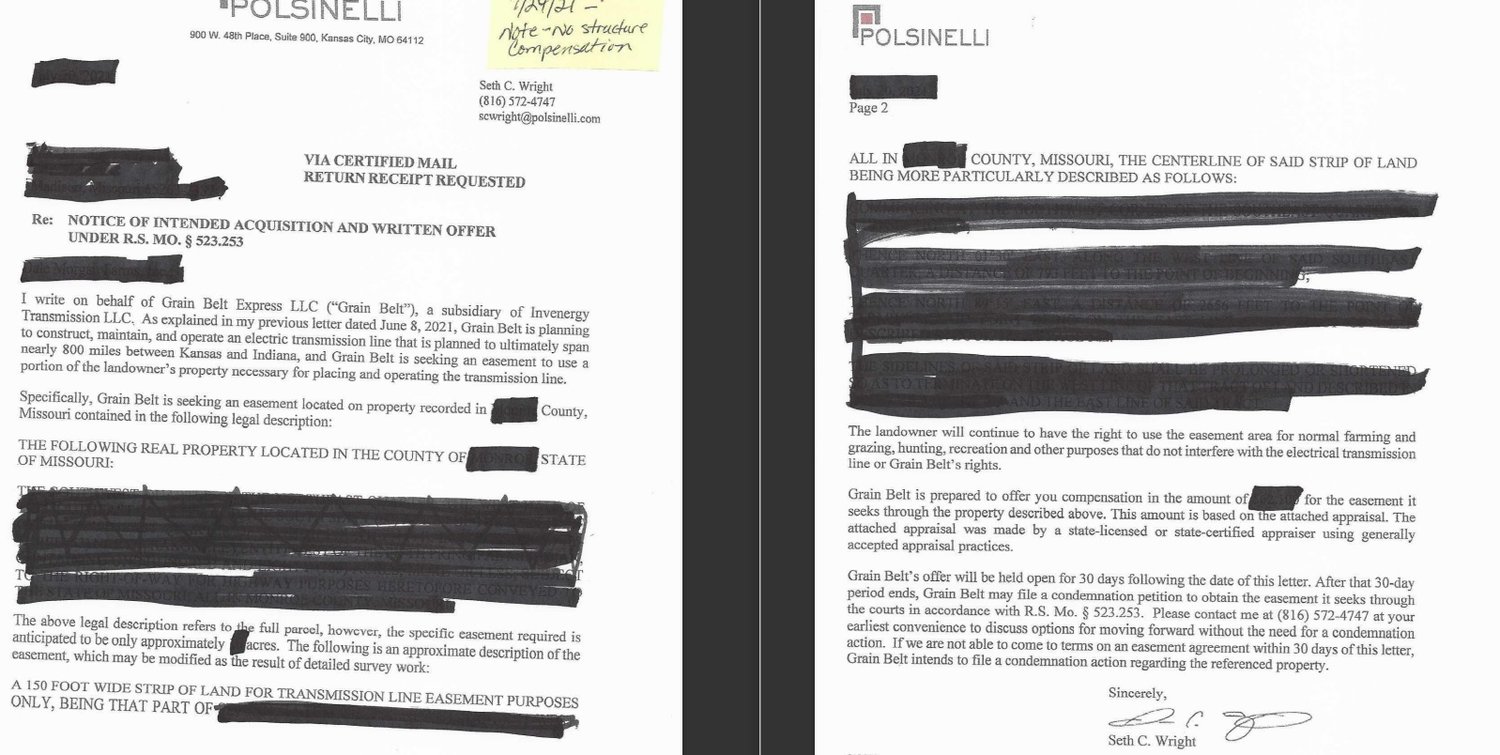 This condemnation letter was sent to a family in Monroe County from representatives of Invenergy Transmission, the company spearheading the Grain Belt Express and Tiger Connector project.
Posted Sunday, August 7, 2022 1:26 pm
By Alan Dale Managing Editor

As the discussion about the Grain Belt Express and its proposed Tiger Connector route continues to heat up, Invenergy Transmission is plowing ahead while a plethora of Audrain County farmers continue to ask plenty of questions.

However, a number of farmers walked away from the open houses held by the company in the last week of July with more questions than answers in some instances.

Devon Brown, who says one of the route options would cut across 60 acres of his farmland out West of Hatton on State Road E, is concerned with the threat of eminent domain being used by Invenergy to fulfill its objective.

"The Grain Belt Express and Tiger Connector is an overreach of a private company using eminent domain to their benefit,” Brown said. “I strongly oppose the Grain Belt Express and the Tiger Connector in its entirety. However, what is most concerning to me is that one of the options proposed for the Tiger Connector not only crosses our tillable farmland, it also comes within a few hundred feet of my home and other homes along its path. I am concerned not only because it crosses our productive farmland and greatly reduces our property value, but I am also extremely concerned for the safety and health of families and children living in homes and playing in our backyards within a stone’s throw of these high voltage eyesores."

Auxvasse’s Don Lehenbauer also cited his disappointment with the project.

“They are trying to pull a fast one and try to beat the system a little bit,” Lehenbauer said, noting that Invenergy is trying to get the Tiger Connector to be grandfathered in with the original Tiger Belt agreement with the PSC. “They are just trying to ramrod that through. We can’t beat them because of eminent domain – they are going to use it any old way they have to. The state congress is trying to get the eminent law changed a little bit.

“All it is is a headache for (Invenergy). It’s not going to stop them.”

Lehenbauer said he does have some contingency plans to battle the company by needing to “beat them at their own game.”

In the area of Lehenbauer’s family farms is a wildlife habitat, with one of the proposed Tiger Connector lines potentially going right through the middle of the land.

A hot-button topic such as wildlife conservation could go head-to-head with another one: clean energy.

Lehenbauer said that Invenergy has been made aware of the habitat.

“I am not anti-improvements or anything that’s good for the people,” Lehenbauer said. “But they are ramrodding this thing through to us under a false pretense. We are sitting right on top of (Union Electric) so they are not going to create, with this powerline, any long-standing permanent jobs for anybody here. Everyone who will put the construction line up is going to be from out of state and live in a camp. The local business at the grocery or convenience store is all we are going to get.

Lehenbauer noted that a local farmer does not have the financial means to battle a big corporation.

To date, no farmer asked about the Tiger Connector addition has cited their approval to the Mexico Ledger.

Brad Pnazek, Vice President, Transmission Developments for Invenergy, responded to questions posed to the company with an email statement.

Pnazek’s response consisted of, “Landowner engagement on easement acquisition for the Tiger Connector has not begun. Input from landowners at the public meetings provide unique information that will help us make decisions as we determine our proposed route for the Missouri Public Service Commission, which we intend to file sometime in August. While considering the routes, Invenergy Transmission is committed to working with landowners to identify routing constraints and opportunities on their property.

“The Grain Belt Express has an existing agreement with 39 municipal utilities across Missouri, including Vandalia, Centralia, Monroe City and Columbia. That agreement will provide more than $12.8 million in estimated annual savings for citizen-led, non-profit hometown utilities and the customers they serve — enhancing the competitiveness of rural communities throughout the state. The Grain Belt Express Tiger Connector will enable delivery of these benefits to more Missouri homes and businesses by connecting the largest power grids that serve Missouri consumers.”

Pnazek did not address the questions if eminent domain has been used against any landowners to date, but a condemnation letter from a representative of the company to a private landowner in Monroe County was obtained that clearly states the Grain Belt initiative to use eminent domain by those means. (see related photo)

Marilyn O’Bannon, Monroe County Western District Commissioner, has personally miles of her immediate family’s and others within her extended relatives’ farms there and in Audrain County, potentially impacted by the Tiger Belt Express project’s proposed routes.

O’Bannon also said she is personally aware of multiple condemnation letters Invenergy has served private landowners in this same context.

“We knew all along they had the authority to use it,” O’Bannon said. “They testified many times that ‘This is our last resort.’ The attitude is somewhat bully.

“In 2021, when the legislative session ended, within 30 days, people on the line started getting 60-day letters. They didn’t wait to send those 60-day letters.”

She noted that Invenergy’s application has been filed in Illinois recently, which is key to the project, but it hasn’t been approved.

“How would you feel about something very experimental going on next to you?” O’Bannon said.

In addition, the question of the potential of not having any interested parties sign up to use the belt and connector would change Invenergy’s initiative was not addressed.

An additional question arose when a citizen who attended the Fulton open house said he was told the connector would ultimately now run to Arkansas.

Jack Cardetti of Invenergy responded, “No.”

Eminent domain allows regulated public utilities to acquire land at market value while unregulated merchant transmission rates are privately negotiated in a voluntary market. Voluntary wholesale customers pay rates equal to the private project’s value to its retail customers. The market price is set by the market value of the project; therefore, it is unaffected by the cost of the project. The delta between cost to build and operate, and the market value customers pay, is merchant profit. Building a cheaper project results in higher profits for the merchant, the document said.

“The next step is to see what the application looks like,” O’Bannon said. “I know (Grain Belt) wants to expedite. You don’t have to be a landowner to oppose this project and the Tiger Connector is a good example. We knew there was a line established and approved by the PSC called the Tiger Belt Express. We didn’t know there was going to be a Tiger Connector. It just goes to show we don’t know when the next project is coming or where it’s coming from.”