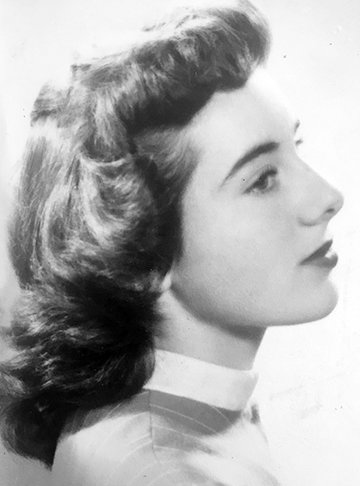 Hazel Skelly Potts, born May 9, 1930 in Washington, D.C., died Nov. 8, 2020 in Round Rock, Texas with loved ones by her side. She married her high school sweetheart, Jack Potts at Ft. Hood, Texas, they were together nearly 60 years before his death in 2012. They both grew up in Mexico, during their senior year he was captain of the football team, she was a majorette, and they were Homecoming King & Queen. They lived in several places before making Overland Park, KS their home for many years.

Hazel was generous and social, and excelled at anything she set her mind to. She was a whiz with numbers and words and was detail-oriented. In the ‘70s, after her girls were grown, she returned to the workforce, employed for many years at a large pharmaceutical company as executive assistant to the chief financial officer. She was an accomplished seamstress and bridge player but was never really interested in culinary skills. She often said “I’m a good cook, I just don’t like to cook. ”Hazel always read The Kansas City Star front to back, would have her papers held when they were on vacation and delivered upon their return, then spent days “catching up”. In the ‘80’s she became proficient recording TV programs so she could watch them each evening. Her favorite show was Jeopardy, it seemed fitting that she and Alex Trebec died hours apart and are surely on the same stage enjoying a game right now.

Hazel and Jack enjoyed volunteering in the church and community. They spent many years in service at Heartland Center outside Kansas City. They were also very active in Presbyterian Mariners, particularly Mariners In Mission, working at numerous work camp assignments across the country. They gained dozens of friends across the country through their mission work.

The family thanks The Cottages at Chandler Creek in Round Rock, Texas for the dedication, love and care Hazel received for several years as well as Paloma Hospice for treating her with dignity and respect. There will be a private family service in Texas. The family suggests memorial donations to Heartland Center, 16965 NW 45 Hwy., Parkville, MO 64152 (heartlandcenter.org/donate), Ghost Ranch, 280 Private Drive 1708, Abiquiu, NM 87510 (ghost ranch.org), or Paloma Hospice, 3000 Joe DiMaggio Blvd. Suite 84, Round Rock, TX 78665.