Miss Spirit of St. Louis wins in only second-ever pageant

If one could measure the 2022 Miss Missouri pageant in comparison to an exercise facility, the 24 contestants would bring more power than all the free weight or cardio machines combined.

Miss Spirit of St. Louis wins in only second-ever pageant 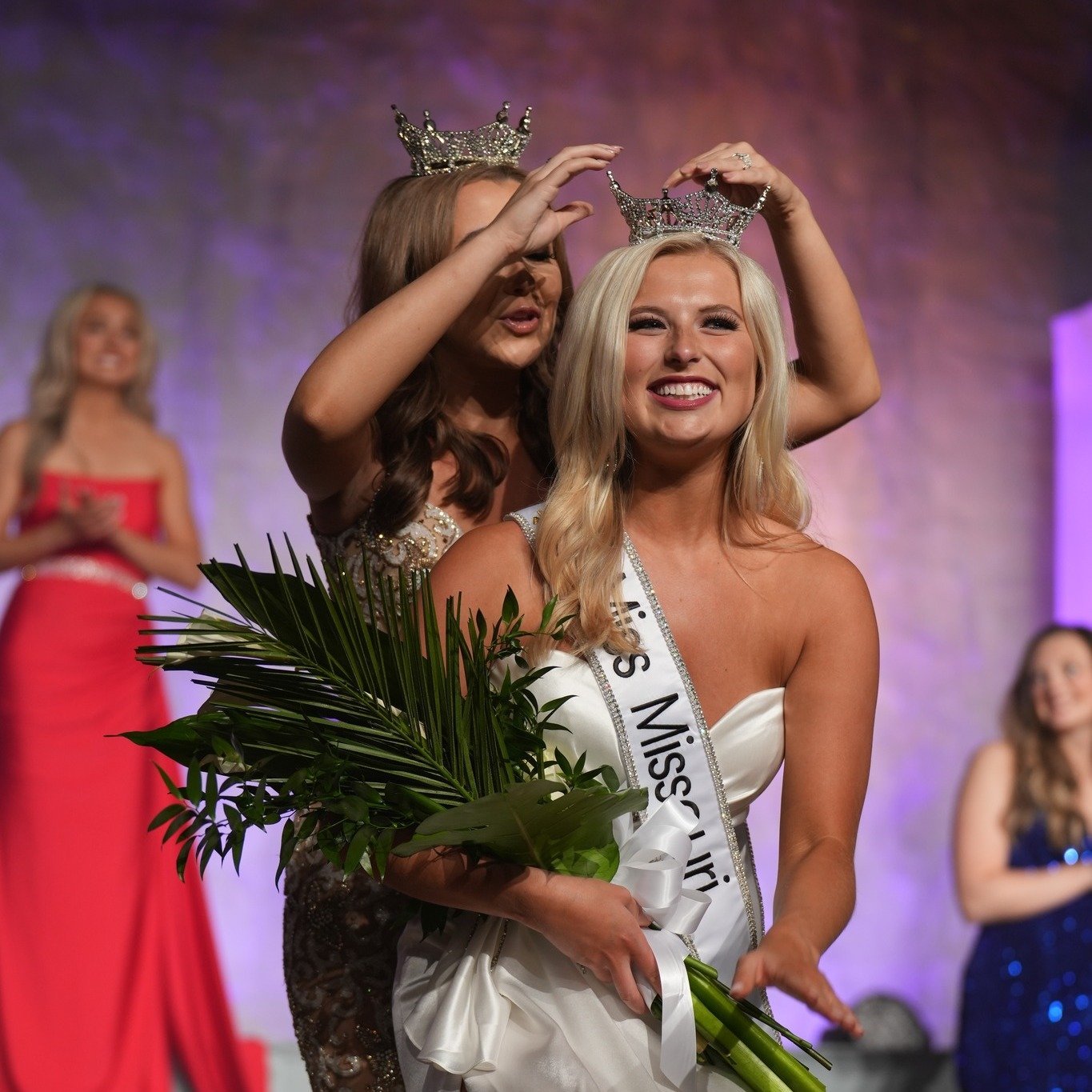 “This organization has taught me how to be a part of something bigger than myself. I am excited for the future, and this is just the beginning.””
Mexico's Callie Cox, Miss Missouri 2021
By Alan Dale Managing Editor

If one could measure the 2022 Miss Missouri pageant in comparison to an exercise facility, the 24 contestants would bring more power than all the free weight or cardio machines combined.

At the Missouri Military Academy, an evening that was a potluck of talent, tradition, a rowdy crowd and an impressive cadre of women vying for the title it would be a ‘Spirit’ that stood atop the mountain.

Kuebler represents the city of St. Louis, and the local title symbolizes the airport, which is right by where she lives.

“There is a whirlwind of emotions, and I am so excited to represent Missouri,” Kuebler said. “My first pageant was actually in September for the Spirit of St. Louis pageant. So technically this was my second pageant.

“The easiest part was talent since I have been dancing since the age of four. (The hardest part) was definitely the interview process. I love talking to people, but when it’s amplified on a mic, you definitely want to carefully choose your words.”

An education major, she will focus on seeking a job once her run as Miss Missouri has ended, unless of course she wins the crown for all the country.

As the new Miss Missouri, Kuebler received a $14,000 scholarship as well as a prize package that includes an official crown and walnut crown box, a feature article in LO Profile Magazine, a wardrobe courtesy of the Miss Missouri Scholarship Organization as well as The Royal We, Regalia and Natalie M., a fur jacket and photo cards from the Missouri Trapper’s Association and Fur Arts, Inc., fashion photography from Devine Studios, a talent consultation with Bill Wolfe of Kansas City, and a health and wellness package from area businesses like Merle Norman, Results Fitness, and the Mexico Area Family YMCA.

The semifinalists engaged in an on-stage interview that was worth 35 percent of their score.

A number of topics dealt with the future of education and America’s youths in general and also some of the new hot topics of the times.

Contestants only had 20 seconds to answer each question.

Miss Springfield, Olivia Henson, was asked how she felt the education of gender should be approached with kids in schools.

“You have to recognize that children in second grade should be learning their colors and be able to grow up and express themselves and identify as they want to when they grow older, not when they are younger,” Henson said, noting she also supported everyone’s individual civil rights.

Kuebler was asked about the reported future overturning of Roe v. Wade and what her thoughts were on which level of government should be making those choices.

“I certainly respect the decision being held back to the state because I certainly respect small government,” Kuebler said. “Even though it may not be my personal beliefs, I believe in the freedom of choice and for a woman to choose what is best for her body.”

Social impact statements included Jarnagin (Made for More, that focused on recognizing the potential in youth), Arnold (Read to Lead that emphasized a need to fight illiteracy), Enowski (Hungry for Change) Hebron (Art Rx: Healing Through Creativity, encouraging the use of art to be push creative advancements) and Kuebler.

“Every two minutes a family hears: ‘Your child has cancer,’” Kuebler said. “This means since you have been seated 60 children have been diagnosed. It is my passion to help these children still feel like children through challenging time while advocating for their health.”

For Hooper, this too was her lone foray into the pageant circuit and for the Mexico resident and University of Missouri School of Law student, just competing was a mission accomplished for one important reason.

“It was just an honor to me because the only reason why I participated in the Miss Missouri organization is to bring awareness to brain cancer,” Hooper said. “I got to do my monologue again tonight. I got to talk about the lighter moments of my journey to break the ice with the audience to make them laugh and then have a serious conversation.

“I am so proud and excited. Brain cancer flipped everything that I knew.”

Hooper’s Social Impact Statement was “Head for the Cure: Supporting Brain Cancer Awareness,” after she shared her story in a talent monologue regarding battling the disease with her mother.

Her focus wasn’t on making it two-in-a-row for Mexico, but more so just keeping the bigger fight in focus and everything else was just white noise.

“My work does not stop here,” Hooper said. “I was doing this long before I won three-and-a-half months ago.”

Hooper also noted that her win as Miss Central Missouri was a result of her first ever entry in a competition such as this.

Outgoing Miss Missouri, Mexico’s Callie Cox, regaled the crowd with a number of singing routines while also hamming it up with 2005 Miss Missouri, emcee Stacie Cooley.

“I would love to come back and work with this organization for the rest of my life,” Cox said, noting her grandest performing memory was singing the National Anthem at a University of Missouri Basketball game. “I love singing … if the opportunity arises, I don’t know if I will make a career out of it one day, but maybe I’ll go on a cruise ship for a few years.”

Cox will graduate from the University of Missouri with a bachelor’s in communications “debt free,” thanks to the Miss America organization, she said.

Cox also noted the level of humility she gained doing the amount of good work as a representative of the organization.

“This organization has taught me how to be a part of something bigger than myself,” Cox said. “I am excited for the future, and this is just the beginning.”

The new Miss Missouri’s Outstanding Teen was awarded to Mallory Sublette of Palmyra, Friday at the Academy.

Sublette, the daughter of Brandon and Jessica Sublette, is a high school student at Palmyra. Her original title was Miss Flower City’s Outstanding Teen.

Sublette, who danced for her talent, also received the Dancing Queen Award in honor of former Miss Missouri’s Outstanding Teen McKensie Garber, the Most Photogenic, and the Digital Strategist award. As a titleholder, Sublette developed her own program, “Wellness 360” for her platform. She described it as: “Promoting intentional efforts towards social, emotional, and physical wellness that create a healthy life balance.”

As Miss Missouri’s Outstanding Teen, Sublette will receive a $7,000 scholarship as well as a prize package that includes the official crown, sash, wardrobe allowance, travel allowance, talent consultations and several wardrobe sponsors: The Royal WE, Serendipity, and Natalie M.

According to Alice A. Leonatti, executive director of the Miss Missouri Scholarship Organization, attendance for the four nights of events reached a total of nearly 2,000 spectators.

“We had a terrific week,” she said. “The candidates competing for both Miss and Teen were all exceptional and put production staff and volunteers worked their magic as usual. It takes a village to put on this kind of event and we absolutely have the best village.”