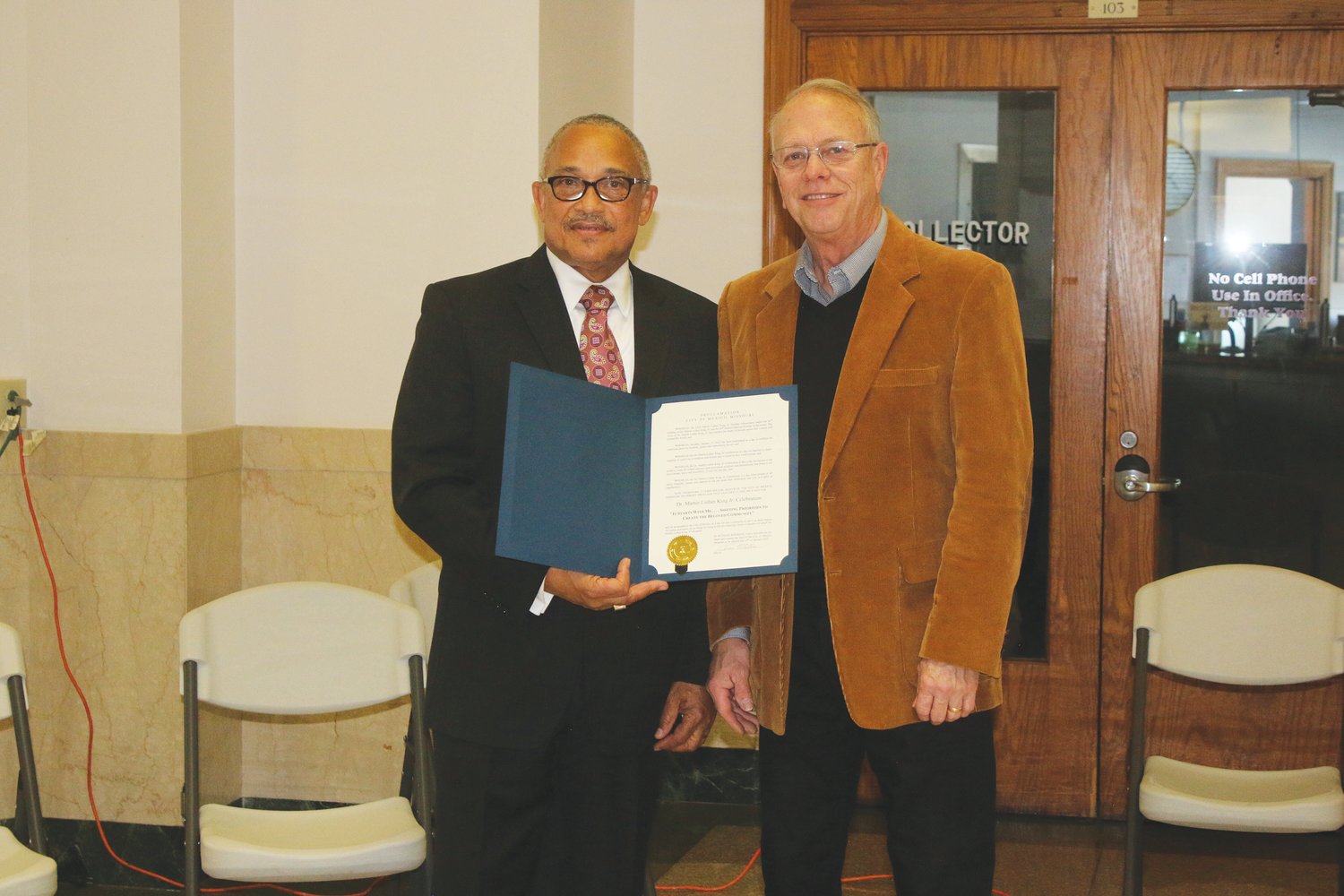 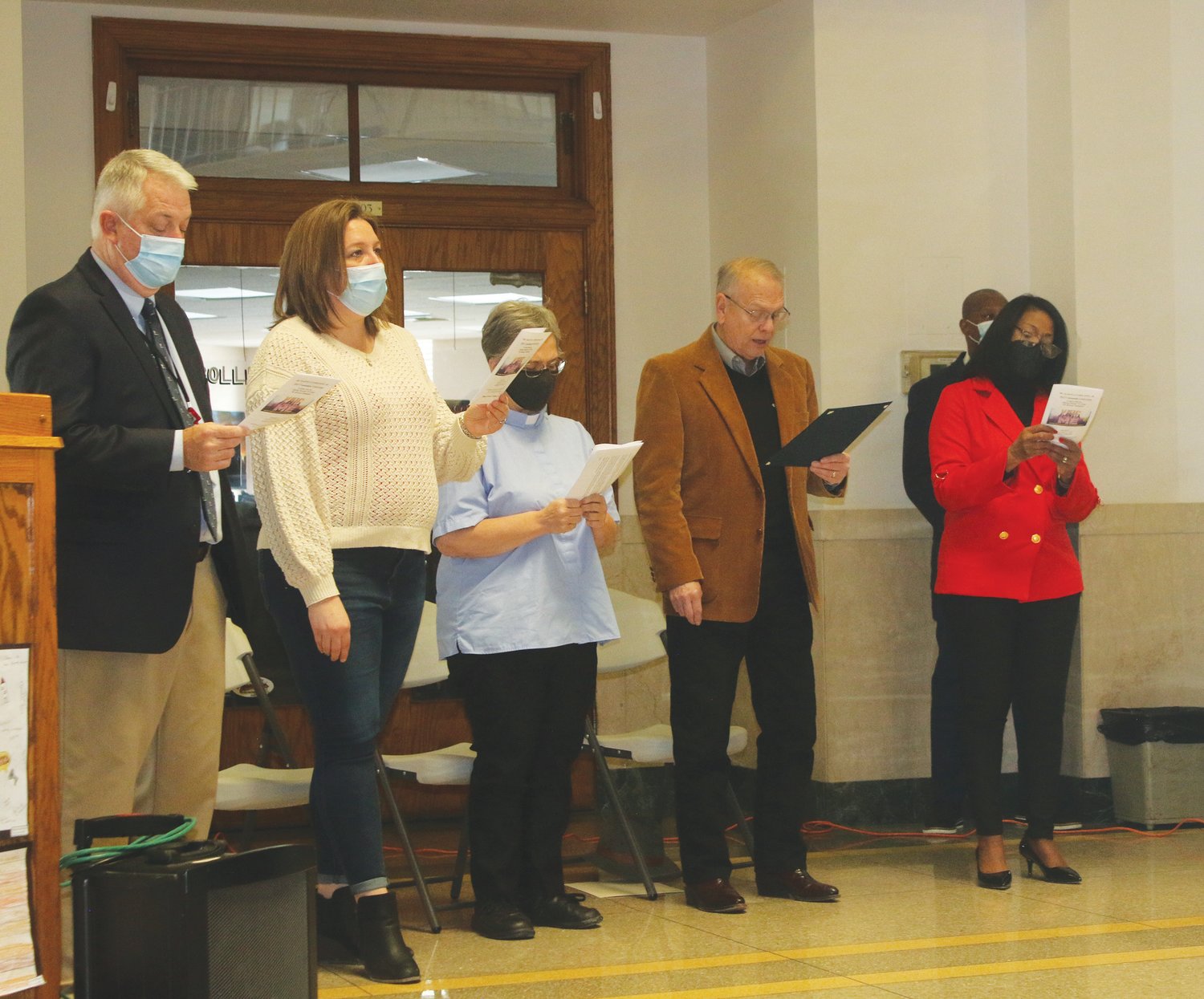 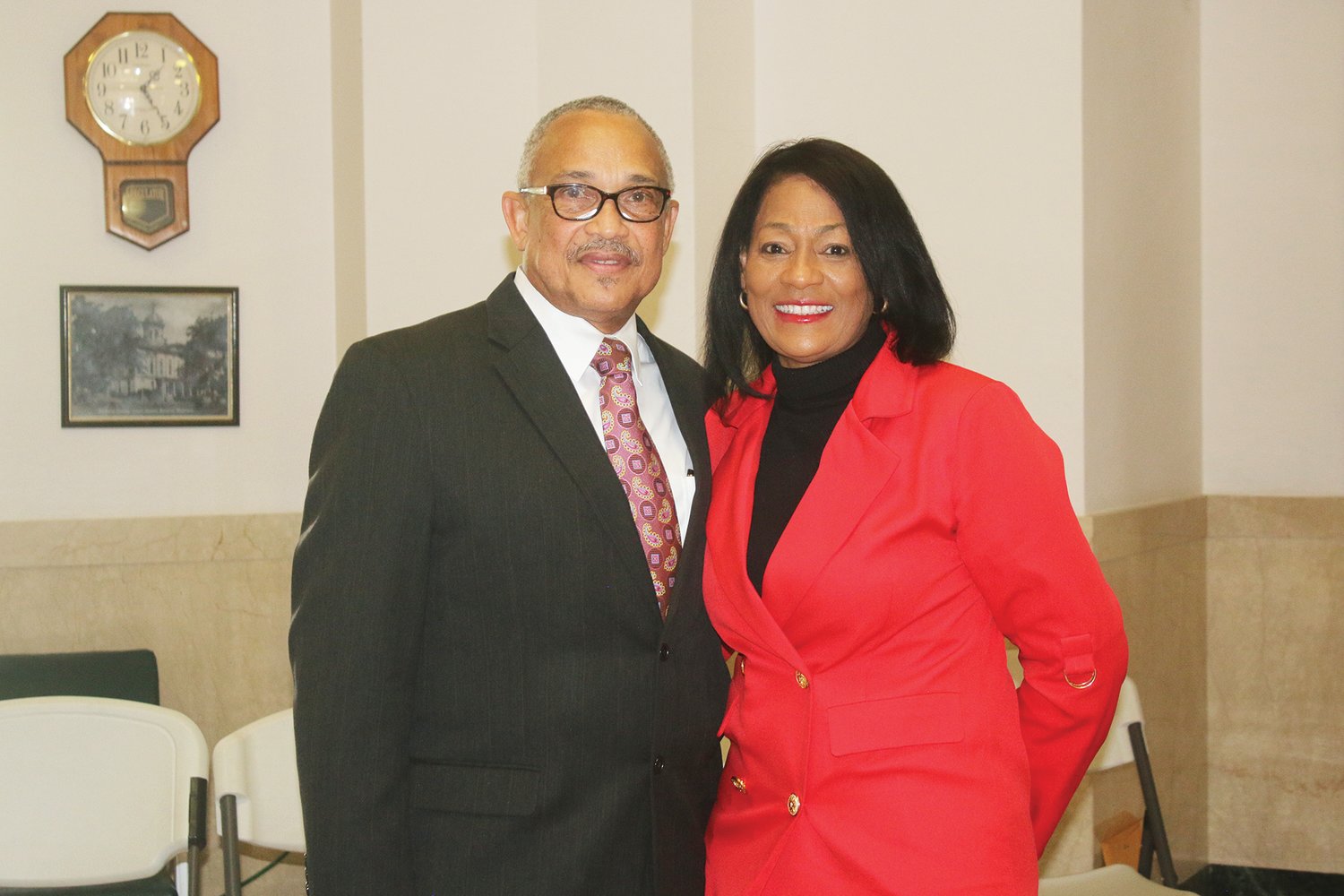 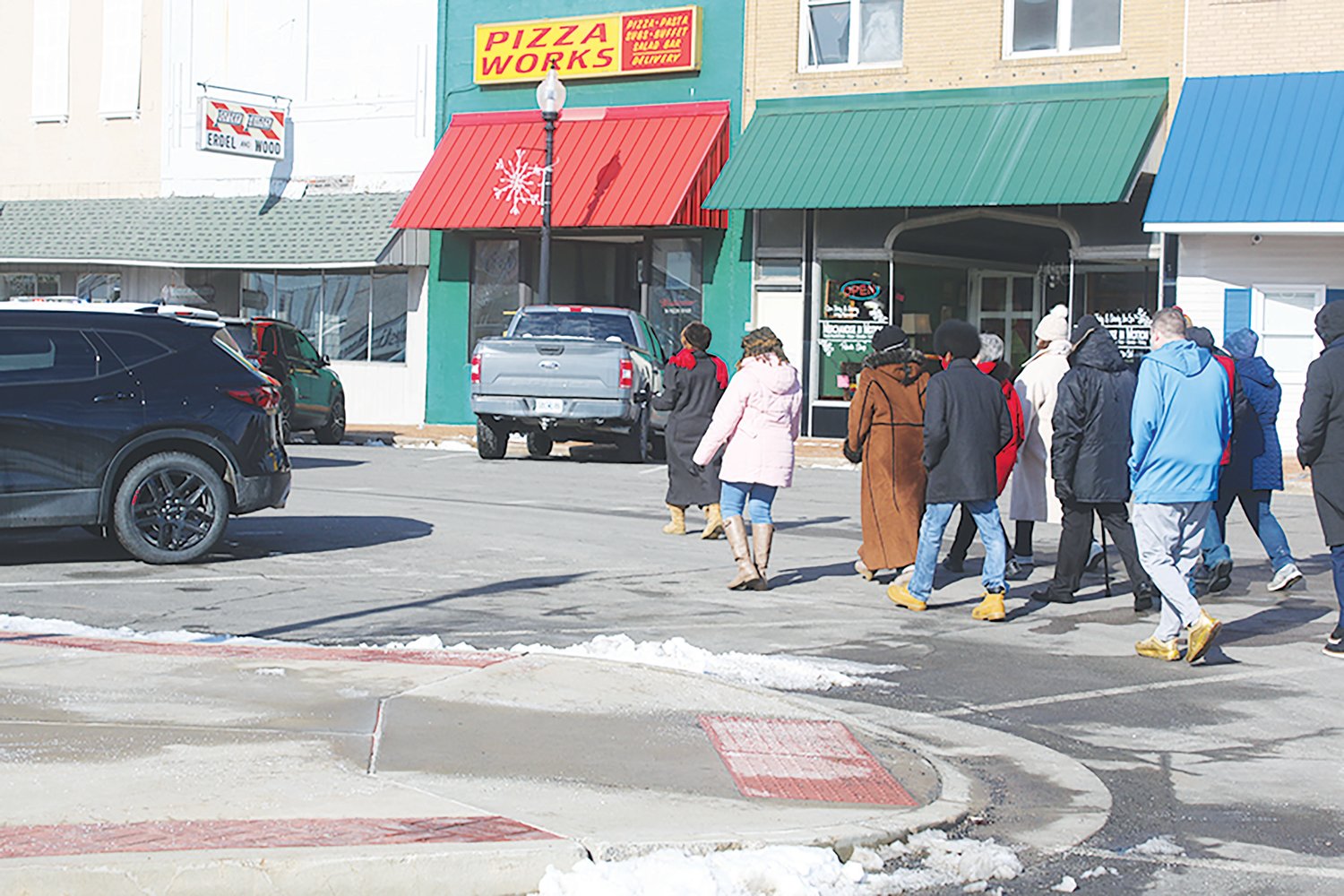 MLK Community Celebration organizer Jaye Jackson leading the group march through the streets of Mexico while singing hymnals as they proceeded to the courthouse. 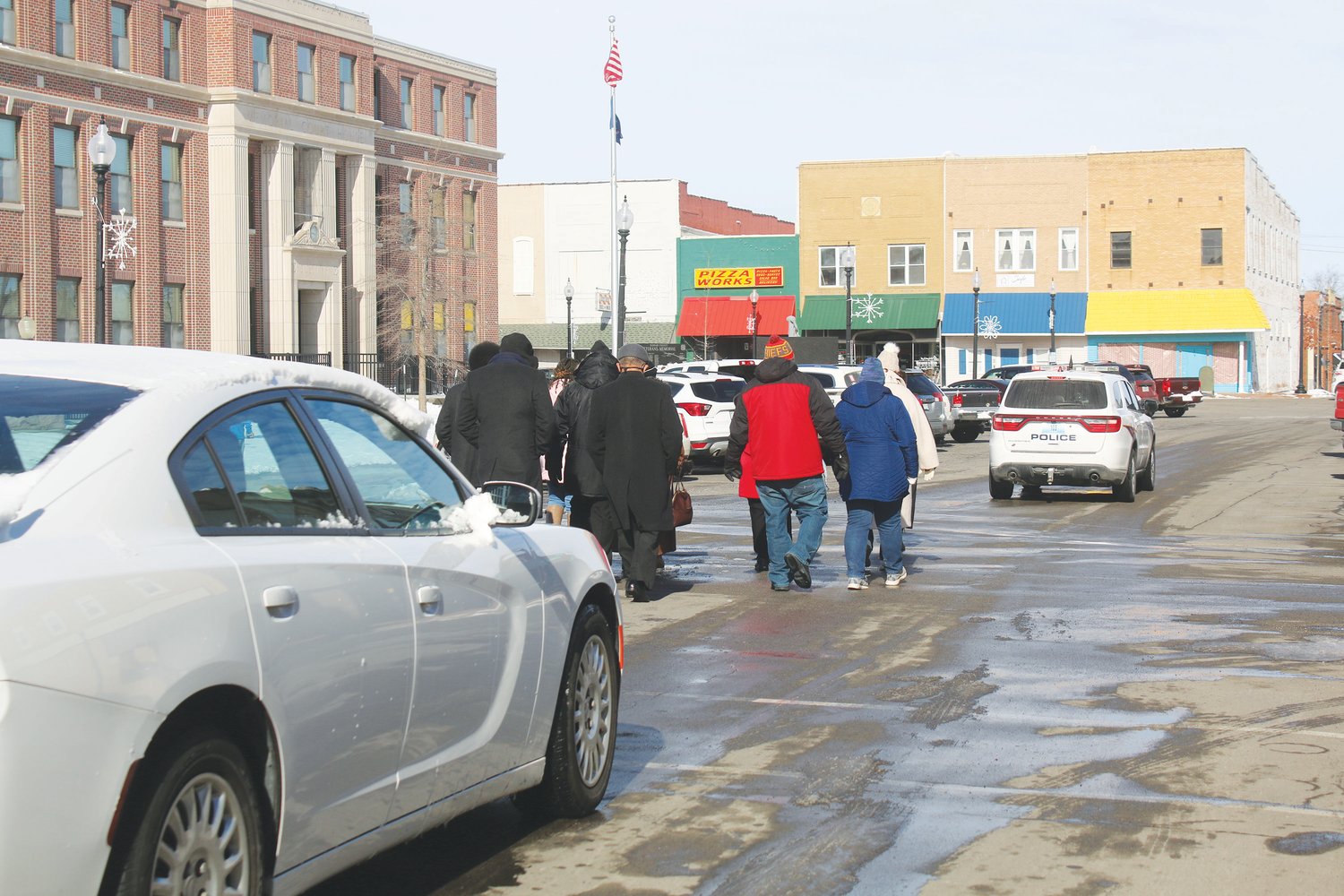 Although marchers had to watch for patches of ice as they marched from the Mexico United Methodist Church to the Audrain County Courthouse as part of the annual MLK Community Celebration, they did not allow the recent bad weather to cancel the event to honor the legacy of MLK.
Previous Next
Posted Monday, January 24, 2022 4:35 pm
Miranda Holman, Managing Editor

On Monday, community members gathered in Mexico to celebrate the life of Martin Luther King Jr. by marching from the Mexico United Methodist Church to the Audrain County Courthouse as part of the annual MLK Community Celebration.

The symbolic march was a way to reflect on the work that still needs to be done for racial equality while honoring the legacy of Martin Luther King Jr.

The march began at 11:30 a.m., and sounds of hymns could be heard as organizer Jaye Jackson sang while leading the group through the streets of Mexico. This year's theme, "It Starts With Me…..Shifting Priorities to Create the Beloved Community," promoted working together positively for the best outcome of everyone involved and to bring awareness of the needs in the community.

After arriving at the Courthouse, it quickly filled with city and county officials, community leaders, students from Mexico School District, and community members who came out to show that being involved is the best outcome for the community.

First Presbyterian Church Rev. Dr. Susan Presley delivered an invocation, followed by members of the Mexico High School Choir singing "We shall Overcome," better known as the anthem for the Civil Rights Movement.

Mexico Mayor Chris Miller honored the civil rights leader by proclaiming Jan. 17, 2022, as the day for the Martin Luther King Celebration and designated the city of Mexico, on this day, to serve as drum majors for justice and peace. Mayor Miller stated, "Monday, Jan. 1, 2022 has been established to reaffirm the American idea of freedom, justice, and opportunity for all."

Along with Miller, other community leaders, including County Commissioner Alan Winders, Mexico Superintendent Melissa Chastin, and Chamber President Melanie Utterback, were also in attendance. Each spoke on the importance of "It Starts With Me" and how each person plays a role in creating change to make a difference in the community. Commissioner Winders spoke on the limited number of birthdays observed as federal holidays and the reasoning why Martin Luther King is one of those days, "I believe it is because of the message that Dr. Martin Luther King Jr. delivered to us was so clear. It was so right morally and ethically. It was timely, yet it is also timeless."

After Commissioner Winders wrapped up his powerful message, organizer Jaye Jackson introduced the attendees to keynote speaker Bishop Sylvester Williams, Sr., who delivered a speech on keeping the dream alive, "We set the stage for the legacy of Dr. King's dream to continue,” stated Bishop Williams, Sr.

Growing up in Alabama, Bishop Williams, Sr. commented, "I lived as a first-generation after Dr. King. I saw many of the things we read about, and even though my parents tried to shield me from seeing things, I still remember seeing white and black people's water fountains. I still remember seeing hamburger stands where some folks went to the front of the lines, and others went to the back.

Bishop Williams, Sr. shared that his intentions were not to spear ill feelings, but instead, he wanted to be truthful and real, “It is not that I am trying to start anything, but I do want us to understand that when we sing songs that share with us, it has a different meaning for those who have lived and been apart of what was happening.”

Bishop Williams, Sr., concluded his motivational speech by leaving a powerful statement with everyone in attendance, "Don't leave me the way you found me, but also give me some hope to know that my tomorrow will be better than my today."