Under dripping skies unsettled by whipping gusts of wind, Lilly Knipfel remained unruffled. She carded a round of 80 on the second day of the Missouri State High School Activities Association … 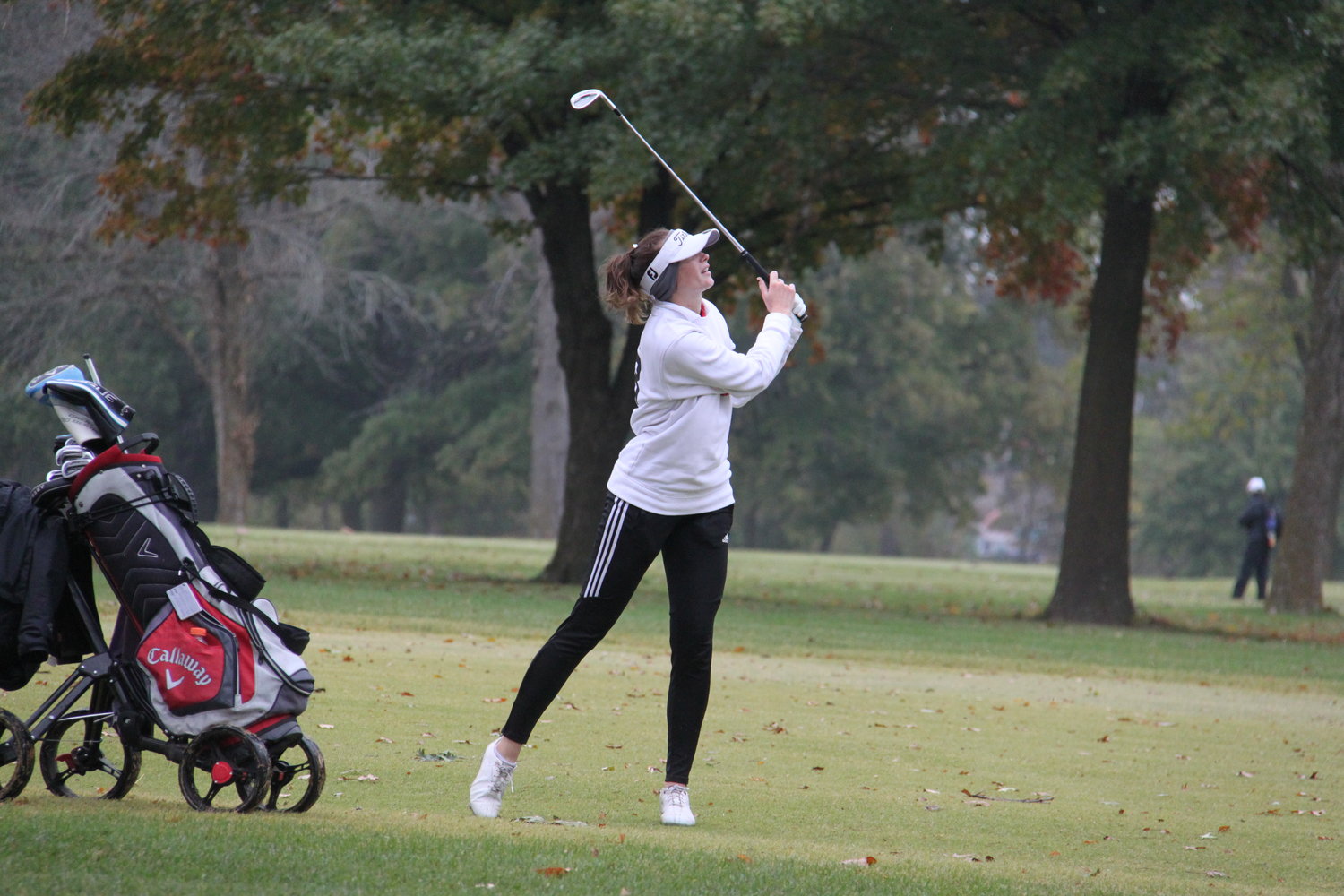 Lilly Knipfel keeps an eye on an approach shot lofted toward a green on the back nine during Tuesday’s final round of the class 2 state golf tournament.
Posted Sunday, October 25, 2020 5:46 pm
By: Dave Faries, Editor

Under dripping skies unsettled by whipping gusts of wind, Lilly Knipfel remained unruffled. She carded a round of 80 on the second day of the Missouri State High School Activities Association tournament at Meadow Lake Acres Country Club in New Bloomfield on Tuesday to finish seventh in class two girls golf.

Despite conditions, the Mexico senior standout was remarkably consistent over two days of play. She recorded a 79 in the opening round on Monday, was 4-over on the front nine both days and slipped up only once – a first day double bogey on nine.

“There are a few holes I did better on, but both days were similar,” Knipfel observed, summing up her final round of high school golf.

Playing alongside Kassady Hull of Eldon and Westminster Christian’s Elizabeth Johnson just in front of the leading group, Knipfel was unable to make a charge up the leaderboard. Her goal for the day, however, was to match her first round score.

Although conditions were damp, the greens on the front nine were surprisingly firm. It took Knipfel two holes to adjust, but then she fired off seven pars over the next nine holes.

“She doesn’t freak out every bad shot,” Mexico golf coach Lindsey Yancey said. “She just plays the next shot.”

That even temperament was evident Tuesday when Knipfel reached approached the 13th green, a par 4 hiding a few subtle traps. It took her three strokes to get there, but that third shot was a marvel – a deftly weight stroke that lofted the ball to the front of the green, taking advantage of a shallow dip. The ball stopped just four feet shy of the pin.

Knipfel’s putt had to be equally measured, as the surface rippled left and right – in this case breaking sharply to the right. She touched the ball softly. It rolled forward a foot and then turned, hovering on the lip of the cup.

But it stalled, forcing Knipfel to tap in for a bogey.

“That’s how a lot of the greens were,” she pointed out, noting that the course appears easy at first glance, but offers some real threats.

On 14 she faced another teasing putt, this time draining it with confidence.

Knipfel plays a thoughtful game. Facing a difficult lie in the rough just off the 15th fairway, she opted for a poke to safety, leaving her 70 yards from the pin with a probable bogey.

“I wanted to challenge it,” she said of the hole location. “But I was on a steep slope.”

No matter. On the next tee she blasted a drive ten yards beyond her rivals – and just where she intended.

“She said ‘I’m going for the red tree,’” Yancey recalled.

Springfield Catholic’s Reagan Zibilski cruised to the state title, carding a 69 on Tuesday to follow up Monday’s 70 for an overall score of 139. Audrey Rischer of Father Tolton finished second, with a 78-75 153.

Six strokes behind second in the field of 74, simply played it her way. She was even on 17, a par 3 that tempts golfers with a clear line to the pin, but taunts them with a mawing bunker. She finished with a par on the longer 18th.

“I just tell myself not to worry about the course,” Knipfel said.

It was the Mexico senior’s fourth and final trip to the state tournament, and the second time she finished in the top ten. The event also marked her last appearance on a golf course in Bulldog colors.

“It’s kind of sad, but kind of exciting for the future,” is the way Knipfel summed up the day – calm and balanced as always.