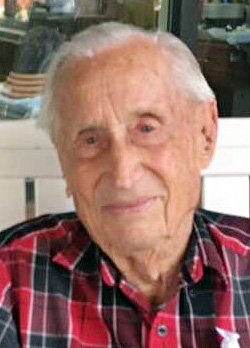 Lucian Earl Bird, 101, of Mexico, entered God’s Light on Saturday, Dec. 5, 2020. Lucian was born on Mar. 13, 1919, in Madison, the eldest son of Ernest and Mable (Farrell) Bird. He graduated from Madison High School in 1937. He also served in the CCC before entering the military. He served in the Army Air Corps from Nov. 11, 1942, until he was honorably discharged in Oct. 1945. He served in India and the Mariana Islands and was stationed on Tinian Island, from where they bombed Japan. Lucian felt honored to fly over the U.S.S. Missouri when Japan signed the peace treaty.

Lucian married Juanita Darst of Madison on Jan. 18, 1947. They made their home in Mexico for 69 years. Lucian worked at A.P. Green Refractory until he began working for the U.S. Postal Service as a mail carrier for 27 years. He often listened to his beloved Cardinals on a transistor radio while carrying the mail. He thus earned the name of the deaf postman because everyone thought it was a hearing aid. All the children on his route knew him as the postman that passed out chewing gum. After he retired, he became a courier for Audrain Medical Center.

Volunteering was a way of life for Lucian. He spent many hours volunteering at the Missouri Veterans Home in Mexico, until he became a resident. He was an active member of the American Legion for 60 plus years, where he was previously the commander. Lucian had also been the manager of the American Legion/VFW Hall in Mexico. He was a member of the First Presbyterian Church and he served as a deacon and usher for many years.

Lucian and Juanita spent most of their retirement winters in Weslaco, Texas. He enjoyed playing shuffleboard, billiards, dominoes and working in his large garden. However, his great love was playing cards and watching Cardinal baseball. He coached Khoury League baseball and taught all his grandchildren how to love a card game. He bowled many years as well.

Private burial services will be on Thursday, Dec. 10, at the Missouri Veterans Cemetery in Jacksonville. A Celebration of Life will be held at a later date.

In lieu of flowers, memorials may be directed to Missouri Veterans Home in Mexico or First Presbyterian Church of Mexico. All may be sent in care of Arnold Funeral Home, 425 S. Jefferson, Mexico, MO 65265.