The Montgomery County Wildcats were too much to handle for the Van-Far Indians in a Class 2, District 5 quarterfinal game on Oct. 30.

The Indians’ season ended at 1-7 after losing to the … 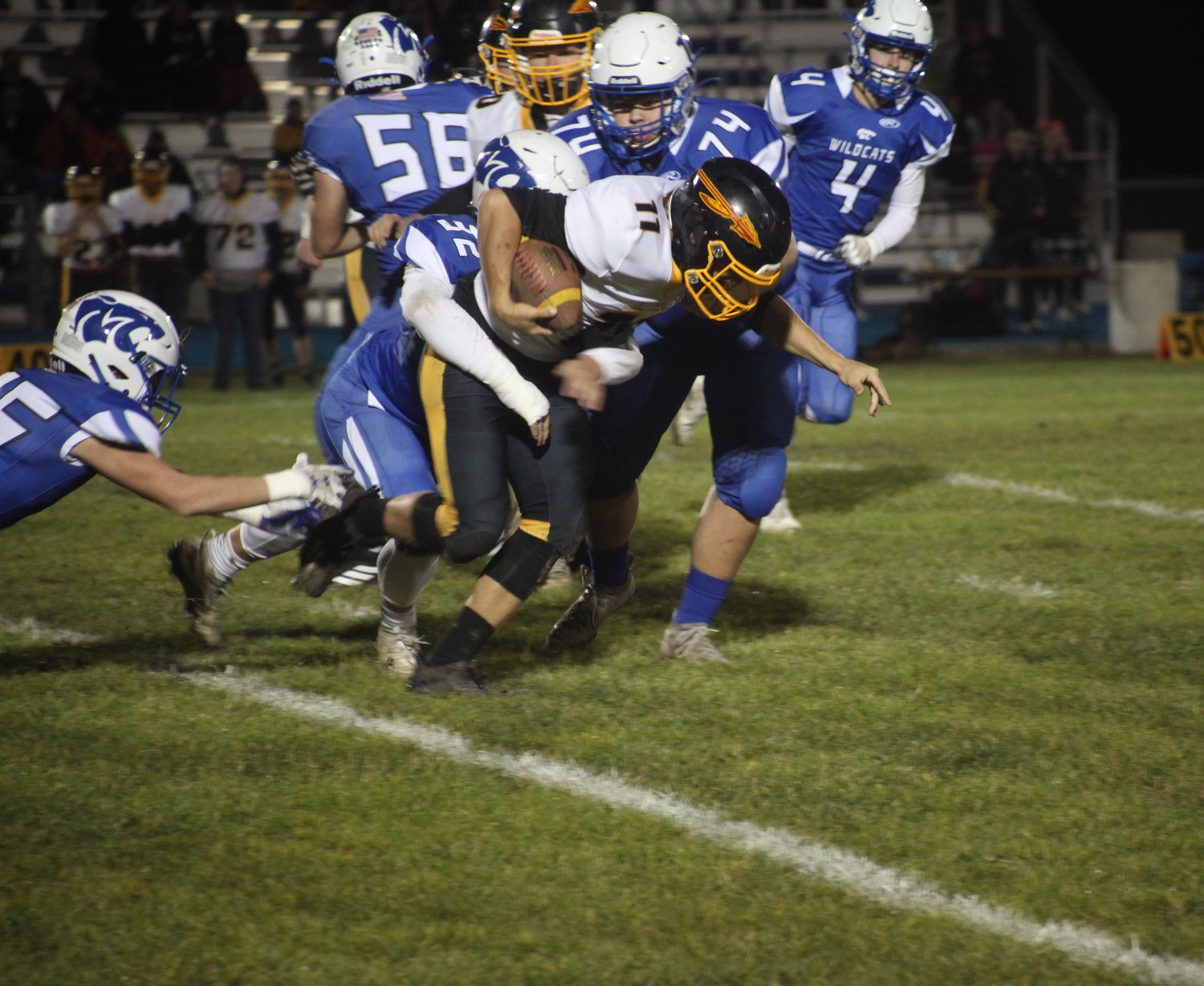 The Montgomery County Wildcats were too much to handle for the Van-Far Indians in a Class 2, District 5 quarterfinal game on Oct. 30.

The Indians’ season ended at 1-7 after losing to the Wildcats 47-20 at MCHS’ Jim Blacklock Field. Van-Far, the No. 6 seed in the six-team district tournament, was eliminated in the district quarterfinals for the sixth consecutive year.

Third-seeded MCHS, which improved to 7-3 and advanced to the district semifinals against North Callaway, defeated the Indians for the second time in three weeks. Van-Far lost 51-6 to the Wildcats on Oct. 16 at home.

“Montgomery County is a really good ballclub,” Van-Far coach John Kliewer said. “(Montgomery County) coach (John) Klekamp has done a good job. He’s been here for a long time and he’s gotten things established. They’ve got a good roster and a good turnout. We’re a developing program. We’re not a big school. I’m really proud of the guys. I think we battled. The odds were against us with the size and the matchup.”

Also for Van-Far, sophomore Brandon Eoff rushed for 121 yards on 20 carries and scored a 10-yard touchdown run with 7:20 remaining in the third quarter. Freshman Gage Gibson finished with a team-high seven tackles.

This fall, the Indians had just 21 players on their roster, 12 of them are freshmen and sophomores. Kliewer said increasing the numbers will be one of the team’s goals for 2021.

“The more we get, the more rest some of these guys will get and the younger guys will play on special teams instead of offense and defense,” Kliewer said. “At times, we’re playing four freshmen at one time. Our average age is 15 years old. We have mostly freshmen and sophomores on the roster. There’s a lot of learning. A lot of younger guys are getting the chance, but they’re taking some lumps and taking some hard lessons. Hopefully, that will pay off as we continue to grow the roster.”

Van-Far didn’t start its 2020 season until Sept. 12 with a road game against Mark Twain. The school was shut down for two weeks due to a coronavirus exposure.

“We did virtual practices like MSHSAA allowed us to do and we documented all of that stuff, so we were good at that,” Kliewer said. “But we had just two days to practice before playing Mark Twain for our first game after having two weeks off. It wasn’t the start we had hoped for. We dealt with some little banged-up injuries here and there. But all in all, I was really proud of how these guys came through and learned a lot this year.”

After losing their first four games, the Indians defeated Clopton-Elsberry 40-20 on Oct. 9 for their only victory.

Kliewer wrapped up his second season as Van-Far coach. This season, he helped raise awareness for mental health by having all of the Eastern Missouri Conference schools wearing green ribbon stickers on their helmets.

“We wanted kids to be safe,” Kliewer said. “COVID-19 has made kids feel isolated and get depression and stuff like that. Even though we have football, we think having kids in sports is a great healer for a lot of things. Usually, it does. Right now, there is a lot more on the kids than what they usually deal with.”