The Oaks golf course had sustained a fair share of water from storms all week in Mexico, but several young children still wanted to absorb knowledge. 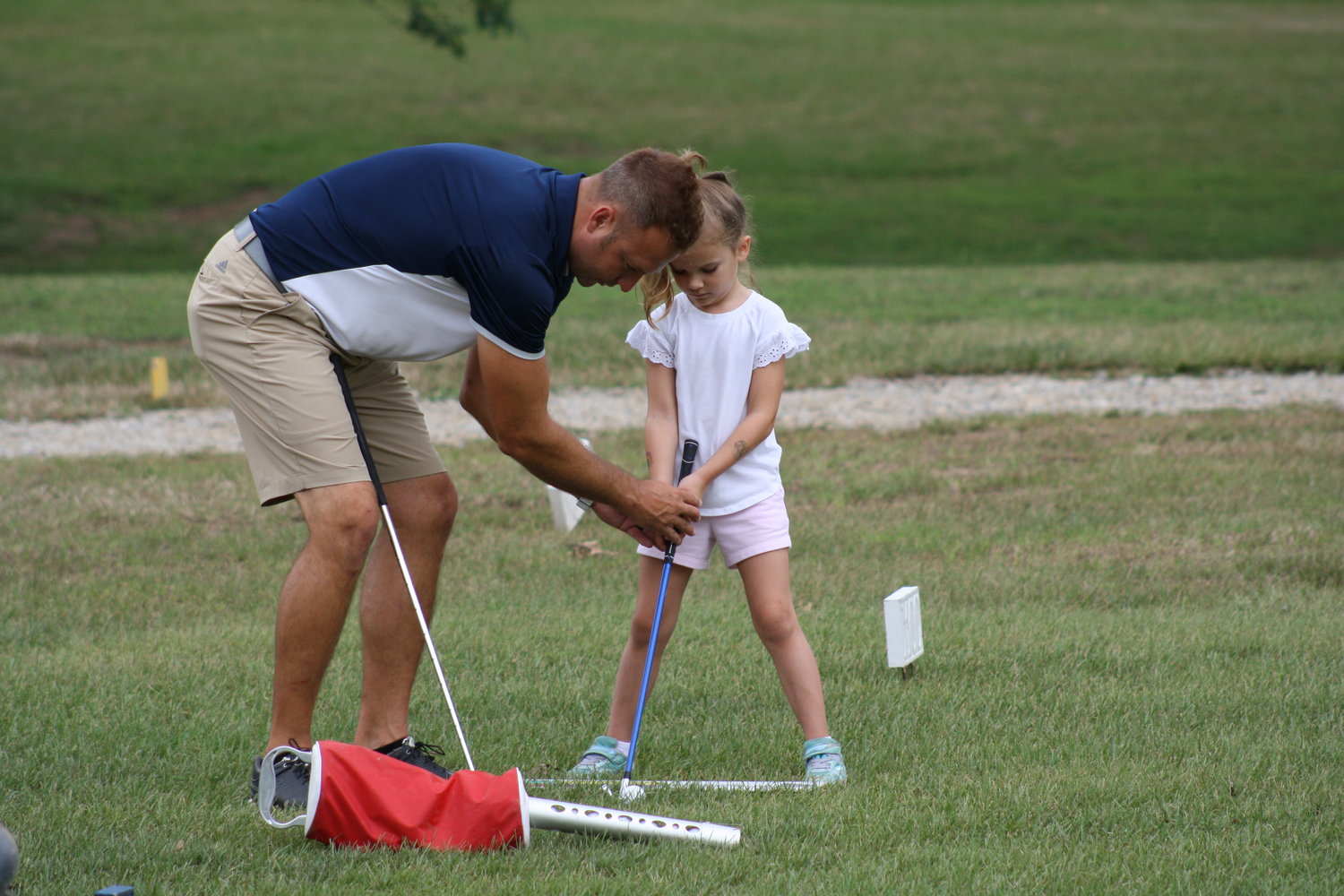 The Oaks golf course had sustained a fair share of water from storms all week in Mexico, but several young children still wanted to absorb knowledge.

On July 25, 28 and 29, John Knipfel taught a junior golf camp that was in its fourth year of existence.

Knipfel said the camp was rained out on Tuesday and didn’t have the typical 30-35 children this year. He said it needed to be pushed back from its usual second week in July window because of vacations but still didn’t have enough kids for middle and high school sessions. Regardless, there were about nine elementary school children this year – ages 6 and older – which is the best time to instill golfing skills that bring several benefits later in life.

“I think, from a social aspect, I’ve learned that kids that play golf at a younger age are less likely to be out running the streets, getting in trouble, they have better manners because they say, ‘Good shot’ and then say ‘Thank you’ if someone says ‘Good shot’ to them. Those kids tend to be better socially and tend to be better in the classroom.”

On the first day, Knipfel said camp started small by teaching putting prior to him introducing some chipping and driving the next day. The young group hit the driving range again the final day prior to testing all their skills on the course.

Knipfel said teaching a younger class requires him to keep the children focused, which isn’t a concern when teaching middle and high school sessions in other years.

With just elementary kids this year, Knipfel and the campers took their time one hole rather than having multiple stations. Considering all of this, he said he and the kids have fun on the course.

Occasionally, Knipfel stepped in when he observed a camper’s shot in need of tweaking and also demonstrated proper mechanics at times. When everyone took all of their shots on one hole, the children rushed to the putting green to retrieve the balls as if it was an Easter egg hunt, grabbing handfuls.

“There’s several ways to teach golf,” Knipfel said. “People would argue there is a right and a wrong way, but there are several ways to teach it. When I was getting my degree through what’s called the PGTAA (Professional Golf Teachers Association of America), they send you the PGA teaching manual so I try to teach out of that book. Depending on who the golfer is, you can deviate from that too. Maybe they have a different swing, the way they hold the club, obviously if you’ve got a left-handed kid, it’s different from a right-handed kid.”

Knipfel gives lessons during the school year and has passed on these lessons to his own children. First, there was Lilly Knipfel, who will be a sophomore at Columbia College after being part of the Cougars’ first-ever American Midwest Conference championship team last season and earning all-state honors three times at Mexico High School. Now, there is Aidan Knipfel, who will be a junior at Mexico following two state trips that resulted in 18th- and 63rd-place finishes.

While the two did start their golfing journeys earlier, Knipfel said they learned the same lessons as the kids during the camp.

“The only difference is I started my kids when they were three or four years old,” Knipfel said. “One of the benefits (of starting early) would be if you want to be competitive in high school. That’s the big benefit. Other benefits would be if you want to play in college. That’s another benefit of starting early. With any sport, you’re seeing kids who play baseball, they’re starting when they are two or three years old. Kids who are playing soccer, two or three years old. The football kids are starting when they are five years old.”

Knipfel said the children had the golf and social skills that could help them build connections in the future, but for now, they had the chance to leave something behind in the form of their signatures on the inside roof of the golf cart.

“I have friends, family and anyone new in my cart for the first time sign,” Knipfel said. “It just creates a good memory to look back on. I’d say there’s 100 or more signatures in here now since April 2020.”