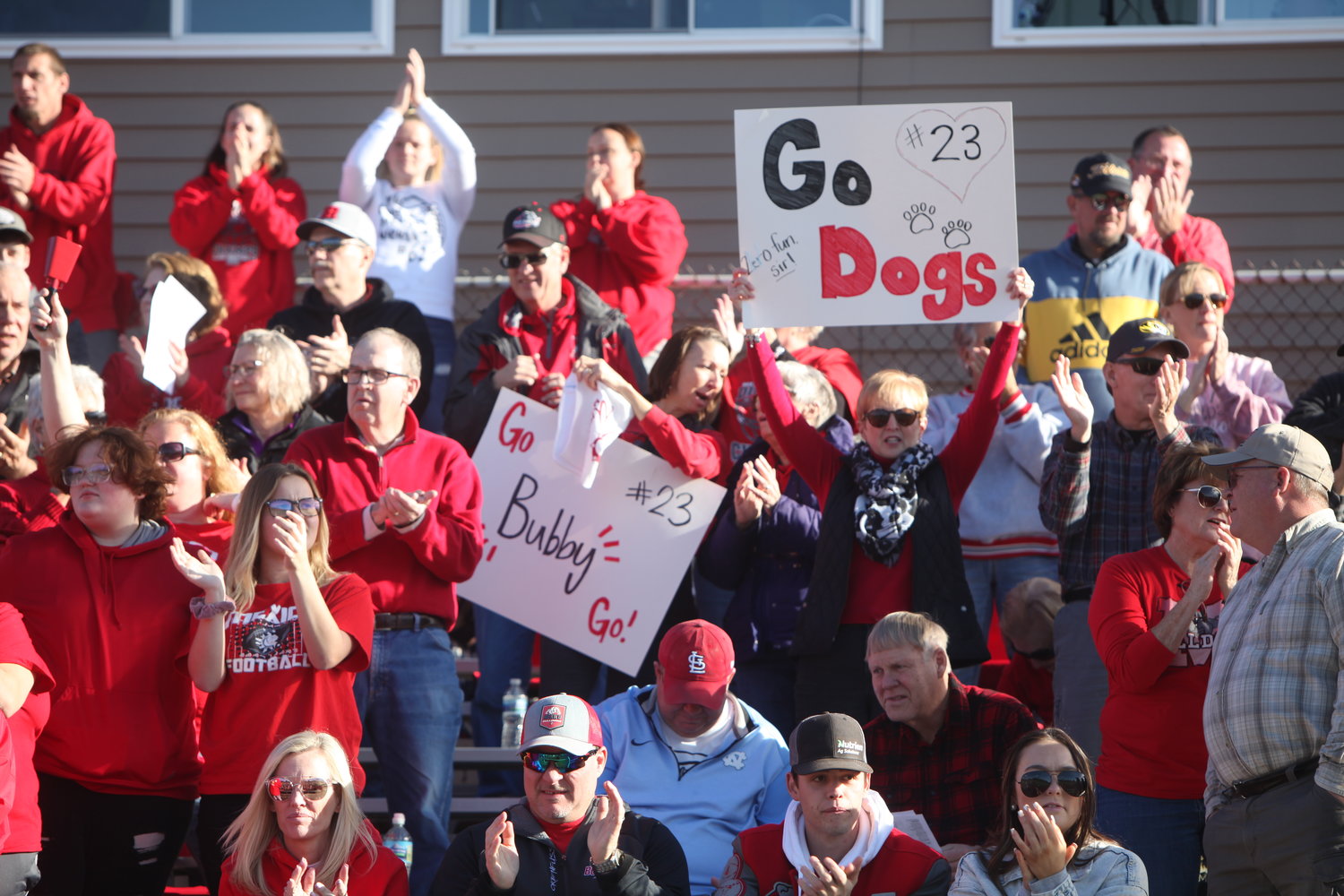 Mexico fans cheer on their Bulldogs during a Class 3 state semifinal game against St. Mary's on Saturday. [Theo Tate] 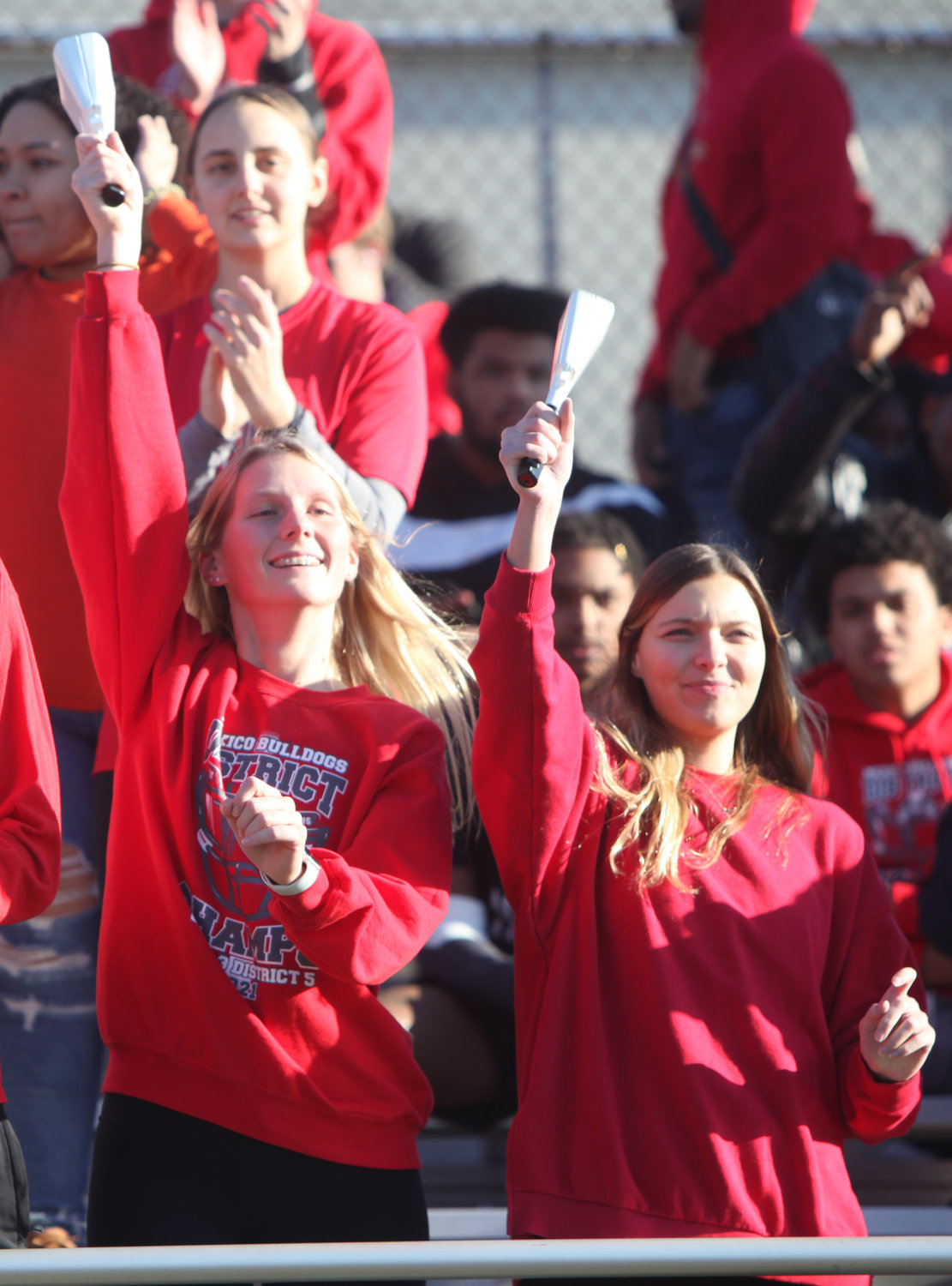 Before the Mexico Bulldogs were getting ready to go on their two-hour trip to St. Mary’s High School for a Class 3 state semifinal football game on Nov. 27, they got a huge sendoff at the parking lot at the MHS Sports Complex.

They can thank the Gridiron Moms for that.

“It’s a great opportunity for the community to come together and let the boys see that they got a lot of support for this game,” said Ann Runge, mother of junior fullback Andrew Runge. “It was a good sendoff.”

The Gridiron Moms are a group of mothers of the players on the football team. They prepare meals for the players the day before a game. They also say a prayer 20 minutes before each game.

“They’ve been great all year,” Mexico coach Steve Haag said. “They did a great job feeding us and doing things for the boys. We have a great community here. They love to support anything that’s going on at the high school and the football team. They get a lot of love from that.”

The Gridiron Moms provided huge support for a football team that enjoyed one of its best seasons in program history. Mexico finished 10-3, captured a district championship and competed in the state semifinals for the first time since 1995.

“It’s exciting,” Runge said. “It’s something that our town has really come to rally around. We’ve all been going through so much with this pandemic. It gives us some hope of good things to look forward to. It’s an opportunity for our kids to show off the gifts that they have.”

The Bulldogs’ season ended with a 62-16 loss to St. Mary’s. Senior Deacon Haag said the future is bright for the Mexico football program.

“We’re losing a lot of good seniors, but this freshmen class coming in is pretty tough,” he said. “I’ll be happy to see them develop. Hopefully, the guys who were juniors, sophomores and freshmen will coach them up and we’ll be back here shortly.”

The Bulldogs advanced to the Final Four with a victory over Seneca 20-7 in the quarterfinals. They beat last year’s champion Blair Oaks in the district finals. Mexico finished with its first 10-win season since 2015.

“When the season first began, we knew we had a good core of kids,” first-year activities director Brandon Schafer said. “But you know sometimes when they step on the field, it’s a different story. Our junior class and our seniors have really stepped up to fill in some holes from some guys who graduated last year. When you have athletes like Michael White, Anthony Shivers, Andrew Runge and Ty Sims out there, it’s hard to beat.”

Schafer said the Gridiron Moms came to him with the idea of having a sendoff for the team at the school. The event began at 8:30 a.m.

“I thought it was a great idea,” Schafer said. “I put it out there, but they got it all together. There were a lot of people there. I was really impressed with the community.”
The Gridiron Moms were among a large group of Mexico fans that showed up at St. Mary’s Kresko-Miller Field 90 minutes before kickoff. Before the game, more than 20 mothers gathered near the football field to pray for both teams.
“It’s a great way to support each other,” Runge said. “We kind of lean on each other.”

Schafer said despite the loss, the fans enjoyed their trip to St. Louis.

“This is really cool to come up here,” the activities director said. “We always wanted to be able to host. St. Mary’s has a great facility with good people. The community has really rallied behind them. It’s been awesome.”