Build it, will they come? GBE talks bring questions

Discussion focuses on not giving up fight

As the ongoing questions mount for Audrain County and those of her neighboring farmers regarding Invenergy Transmission and the Grain Belt Express Tiger Connector, many …

Build it, will they come? GBE talks bring questions

Discussion focuses on not giving up fight 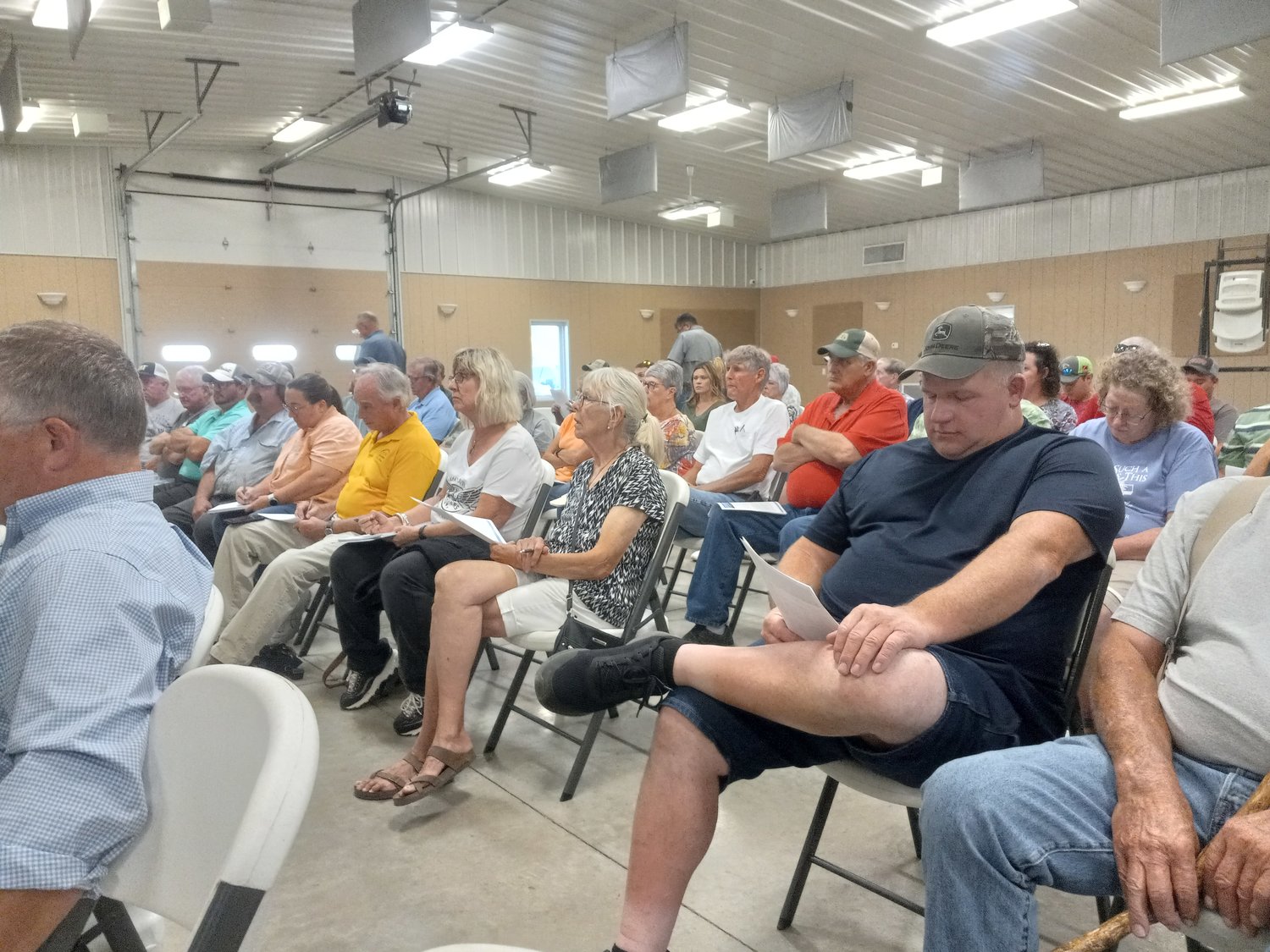 About 75 people met at the Audrain County 4-H building on Wednesday to discuss their feelings about the Tiger Connector and the Grain Belt Express as more questions have gone unanswered according to attendees. [Alan Dale]
Posted Tuesday, August 16, 2022 11:09 am
By Alan Dale Managing Editor

*Editor's note: Invenergy Transmission answered a myriad of questions and their responses will be published in the  August 20 edition of The Mexico Ledger.

As the ongoing questions mount for Audrain County and those of her neighboring farmers regarding Invenergy Transmission and the Grain Belt Express Tiger Connector, many citizens have taken on the approach that the fight is not over.

With the threat of Invenergy using eminent domain to work on the properties it deems will be needed to connect the clean energy line from Kansas to Indiana and throughout portions of Missouri, many are left scratching their heads.

On Wednesday night, about 75 people gathered to discuss the current state of affairs of the Audrain County 4-H building, including topics such as how local farmers continue to battle Invenergy’s project to the question of how Grain Belt Express goes forward if no potential “customers” have been noted to date.

Dan Engemann, Director of Regulatory Affairs for the Missouri Farm Bureau since January, was the first of the three primary speakers that led proceedings before questions from the audience flowed.

Engemann said he was “impressed” with the presentation Invenergy held in Mexico and Fulton last month during their open houses to better explain their new Tiger Belt Connector. They discussed topics such as buried lines – which they found would be more costly – and he said Invenergy officials “did not say no,” about the possibility of going that route.

Still, Engemann said “we feel pretty deceived,” by the project and the connector.

“It seems like interesting timing when the legislative session is over, that they announce this project,” Engemann said, noting that the Missouri Farm Bureau sent out a letter denouncing the project signed along with other organizations.

House Bill 2005, which goes into effect on August 28, includes: ... that the authority for an electrical corporation, except for an electrical corporation operating under a cooperative business plan as described in Section 393.110, RSMo to condemn property for purposes of constructing an electrical plant subject to a certificate of public convenience and necessity under Section 393.170 shall not extend to the construction of a merchant transmission line with Federal Energy Regulatory Commission (FERC) negotiated rate authority unless the line has a substation or converter station located in Missouri that is capable of delivering an amount of its electrical capacity to electrical customers in the state that is greater than or equal to the proportionate number of miles in the state.

Additionally, if an electrical corporation, except for one operating under a cooperative business plan, acquires an involuntary easement in this state by means of eminent domain and does not obtain the financial commitments necessary to construct the project for which the easement was necessary within seven years of the date such easement rights were recorded, the corporation shall return the easement to the fee simple title holder within 60 days and cause the dissolution of the easement. If the easement is returned, no reimbursement of any payment made by the corporation to the title holder will be due.

The feeling by some is that Invenergy is trying to push its way toward the PSC complying with the Tiger Connector addition prior to the HB 2005 going into effect.

“How do we make this the least impactful that we can,” Engemann said. “We continue to push them to bury the line? I don’t know.”

Questions from the audience included concerns with the state not protecting the farmlands with vigor, especially Audrain County, which is the top soybean producer in Missouri and one of the bigger ones in corn.

“In a perfect world, we’ll get this stopped,” Engemann said.

Another point of focus was that, to everyone’s knowledge, no one has entered into an agreement with Invenergy to use the future GBE or the connector.

Engemann, Lynn Thompson, general manager of Consolidated Electric in Mexico, and Wiley Hibbard, presiding commissioner of Ralls County, all said that none of them have heard if Invenergy would move forward with the project even if they have no “customers” signed up prior to the first steps of building.

Thompson said that he is unaware of any customers or producers entering any deals with Invenergy.

Hibbard said he has been told that Invenergy has “entered high-level discussions.”

The Tiger Connector would be an AC line which can pull in and take out power.
Thompson addressed the issue of the use of right of way for transmission lines by Invenergy.

“They can’t use any of our easements or right-of-way, they have to get their own,” Thompson said. “Ours are designed for (Consolidated Electric) facilities.

If we try to put their lines inside of (theirs), we will have to triple the width of those easements. We are not allowing them to use any of ours.”

Hibbard said they have been fighting Invenergy for almost a decade since the early days of the GBE proposals.

“The Public Service Commission will listen if enough people call, write, whatever is necessary,” Hibbard said. “There are two other occasions where they have denied it. No matter what they tell you, this isn’t a done deal. They’ve told us it’s been a done deal since 2014.”

Hibbard added that people need to be wary of whatever they are hearing from Invenergy regarding the project.

“They want the certificate of convenience and necessity which is a fancy way that it gives them a right to eminent domain,” Hibbard said. “They do not have a right to do that other than through the Public Service Commission. They are trying to get an application in before August 28 (to not comply with provisions of HB 2005).

“They will tell you what you want to hear. If we all get together and fight, this all can be stopped.”