Michael White was certain of one thing after Hannibal downed the Bulldogs 48-21 on Homecoming.

“This will be our only loss,” he said.

The outcome was not unexpected. The Pirates are … 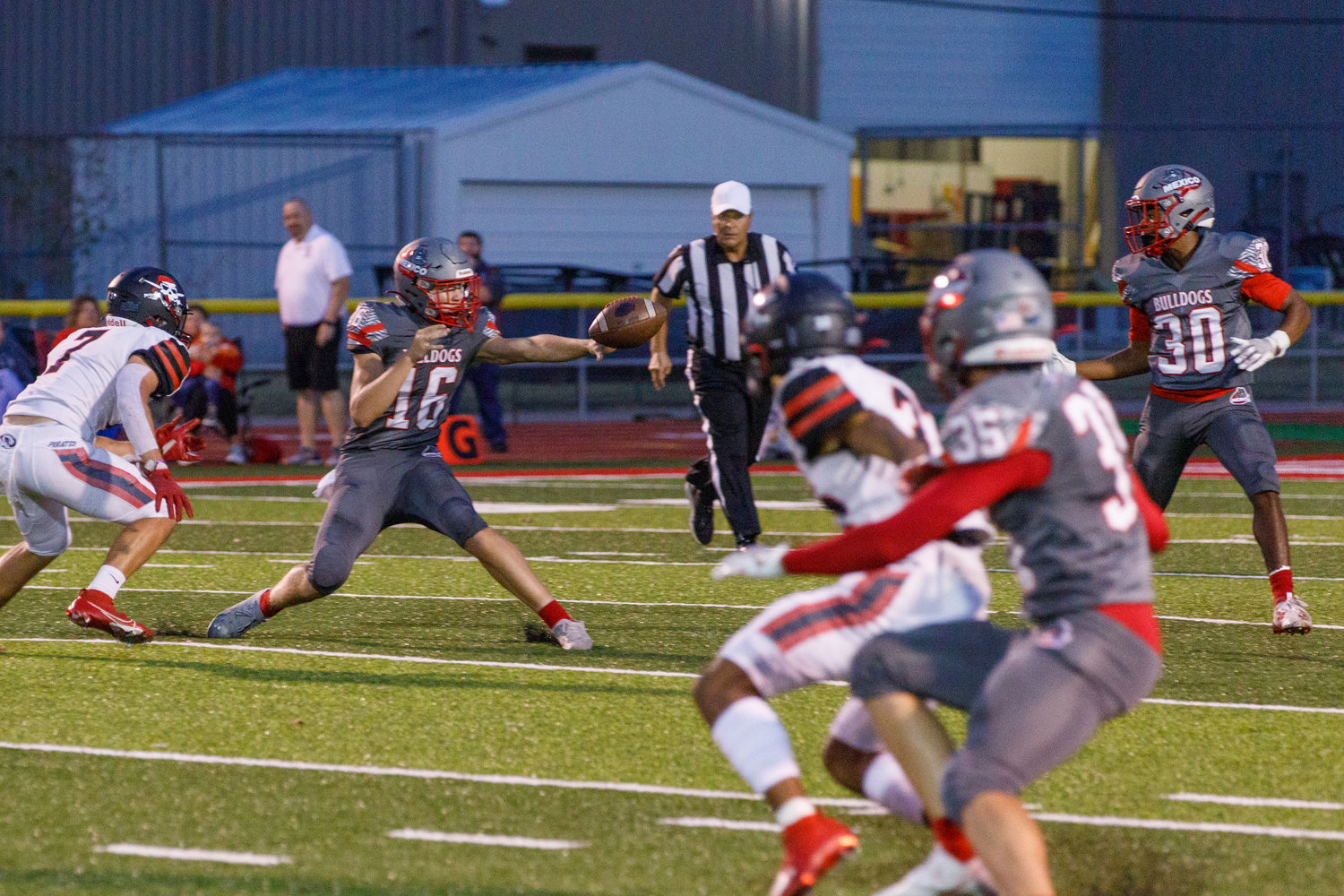 Michael White was certain of one thing after Hannibal downed the Bulldogs 48-21 on Homecoming.

“This will be our only loss,” he said.

The outcome was not unexpected. The Pirates are a larger team from a higher class assignment. And they brought a backfield capable of grinding out 300 yards.

Mexico’s defense held Aneyas Williams to 29 yards on the night. But Hannibal has other weapons. A.J. Thomas piled up 212 yards on the ground.

Yet after falling behind 21-0 midway through the second quarter, the Bulldogs were able to keep pace with the visitors. On fourth and inches on the Hannibal 33, quarterback Ty Sims bulled his way to a first down. He hit White on a slant pattern for another first.

From the 10 yard line moments later, Sims handed to White, who bounced off a would-be tackler, spotted a hole and raced to the end zone.

White almost reached paydirt again with a spectacular play just before the half. With the score 28-7, Hannibal quarterback Courtland Watson looked to pad the lead. He threw over the middle, but White stepped in front of the receiver at the goal line and picked off the pass in stride.

He raced back up field, breaking to the sideline before being hauled down at the Hannibal 12.

“I read it -- it was right to me,” White said, adding that on a return where the elusive back covered around 120 yards dodging Pirates, “I was gassed.”

No matter. Sims retreated into the pocket with plenty of time and found McCurdy on an out pattern for the score.

Given good protection, Sims threw for 133 yards and 2 touchdowns on 6 of 12 passing.

The Bulldogs went into the locker room down 28-14, but had put in a solid second quarter. They opened the third with another completion, this time to Anthony Shivers for first down yardage.

“We tried to get momentum back in our favor,” McCurdy observed.

But the Pirates weren’t through. With 5:56 to go in the third they scored to make it 35-14 then won the ball back on an onside kick. Hannibal capitalized, adding another touchdown.

Mexico responded quickly to the Pirates final score, which came with 9:14 remaining in the game.

Hannibal’s Williams kicked off out of bounds. Mexico got the ball at midfield and on second down Sims hit Shivers on a fly. The speedy back sidestepped his man and took off, racing 53 yards for a touchdown.

“When I looked up it was open space,” Shivers said. “It was a good play call.”

Shivers and Andrew Runge had two receptions each. White and McCurdy grabbed one apiece.

Runge carried 13 times for 35 yards. White and Sims both picked up 34. Shivers ran 7 times for 24 yards. Jaden Hatfield had a 2 yard plunge.

Runge was perfect on points after.