After his Mexico football team fell 62-16 to the St. Mary’s Dragons in a Class 3 state semifinal game on Nov. 27 at Kresko-Miller Field in St. Louis, coach Steve Haag was in tears during a post … 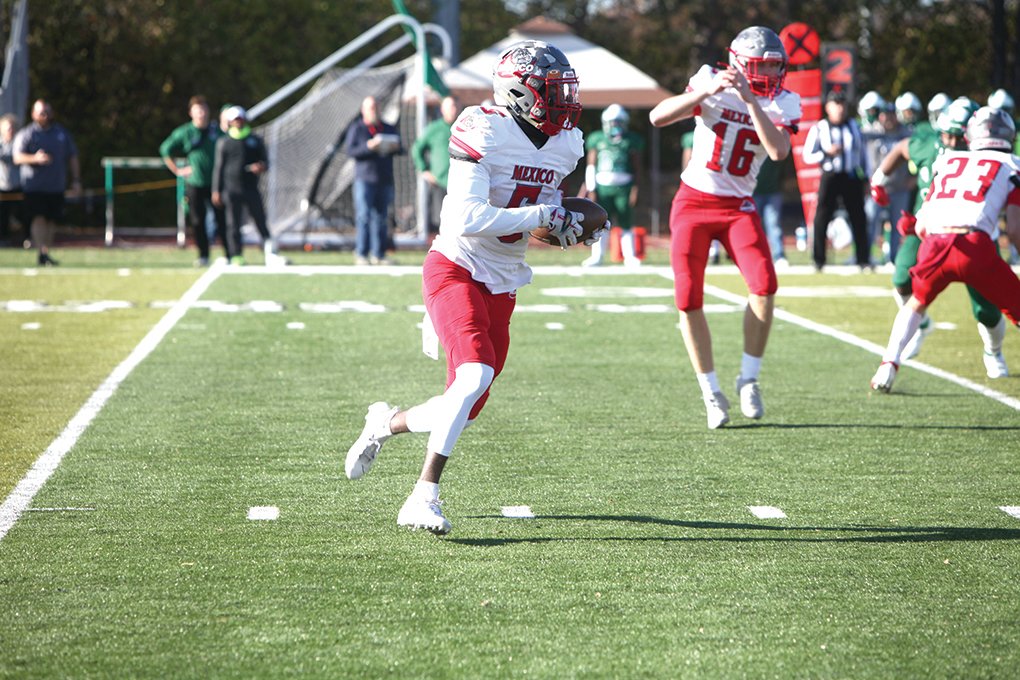 Mexico senior Michael White goes for a carry against St. Mary’s in a Class 3 state semifinal game on Nov. 27 in St. Louis. White finished with two touchdowns, but his effort wasn’t enough as the Bulldogs lost 62-16 to the Dragons. [Theo Tate] 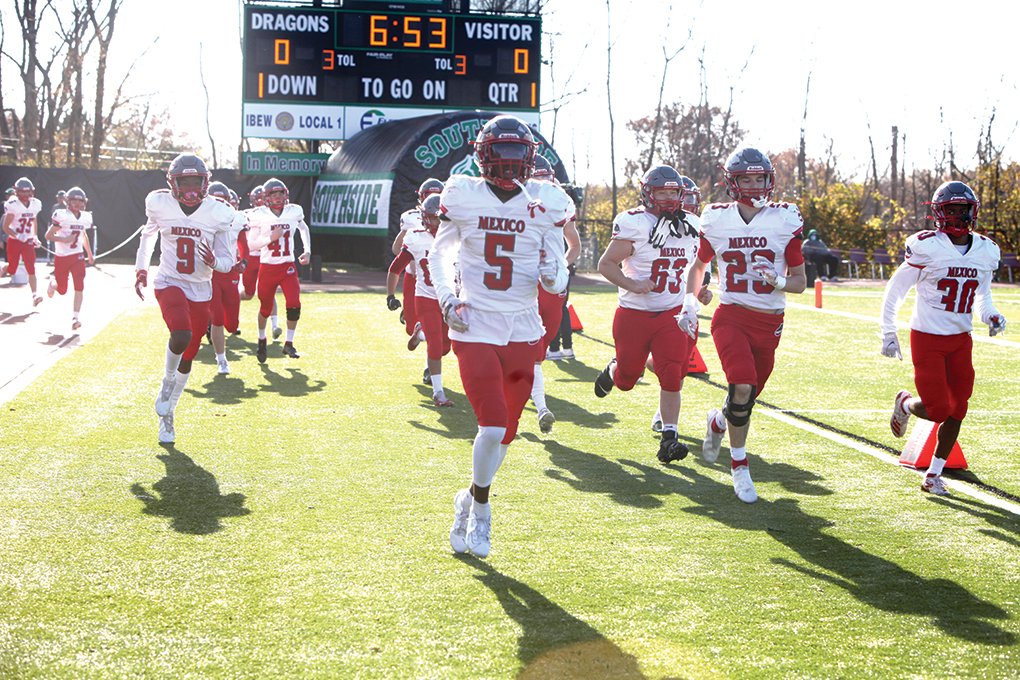 After his Mexico football team fell 62-16 to the St. Mary’s Dragons in a Class 3 state semifinal game on Nov. 27 at Kresko-Miller Field in St. Louis, coach Steve Haag was in tears during a post game meeting at the 30-yard line.

At 4:03 p.m., the Bulldogs’ outstanding season came to an end. Mexico finished 10-3, its first winning season since 2017, and came up one victory short of going to its first championship game appearance in program history.

“I don’t feel sad,” Deacon Haag said. “I’m really proud of what we did this year.”

The Bulldogs competed in the Final Four for the first time since 1995. They advanced to the state semifinals by cruising past Seneca 20-7 on the road in the quarterfinals on Nov. 20.

“That’s something they’ll never forget,” Steve Haag said. “It is a special season for the seniors as well as the coaches and the rest of the team. The ultimate goal is that you try to win every game. Although we’re a little disappointed, we hope to get back to work and get back here someday.”

“We’re losing seven seniors who did a great job,” Steve Haag said. “The one thing is you want your seniors to contribute and these seven contributed a lot.”

Haag is sad that he coached his son for the final time.

“He does a great job in the classroom and I’m super proud of that,” Haag said. “That’s what we want to see. I think there are bigger things ahead for him. Right now, I’m excited that he got to have this experience.”

“We’ve got some people like Michael White we have to replace,” Haag said. “I don’t know if you'll ever replace him. He’s a heck of a football player.”

St. Mary’s improved to 11-1 with the win over Mexico and qualified for the state finals for the first time in program history. The Dragons will take on St. Pius X of Kansas City at 11 a.m. on Dec. 4 in the championship game at the University of Missouri in Columbia.

“It means a lot because the kids work hard,” St. Mary’s coach Ken Turner said. “To accomplish something that has never been done, it’s special for this group of kids. They fight extremely hard. It’s a tribute to them and the coaching staff.”

Kevin Coleman, Jr. scored four touchdowns, Chase Hendricks and Jamal Roberts each had two and De’Shawn Fuller had one for St. Mary’s, which extended its winning streak to 10 games.

Roberts scored a 93-yard touchdown run with 8:30 left in the first quarter to give the Dragons a 7-0 lead they never relinquished.

“We knew it was an uphill battle just with the kind of guys they have on that side of the ball,” Haag said. “We knew what players they had. We had to play a perfect game. Of course, we didn’t do that. But we didn’t hang our heads. We took advantage of everything that we got this year. They played hard this last half of the season and earned every bit of that. We’ll walk out here with our heads up high and proud to be Mexico Bulldogs.”

The Bulldogs finished with their first 10-win season since 2015. Haag said the 28-14 loss to Kirksville on Oct. 8 helped motivate his team for the rest of the season.

“I thought we had a little hiccup against Kirksville and I thought they were a little upset about that,” the Mexico coach said. “They decided to buckle down after that and they got back after it. I thought we played some of our best football the last four weeks of the season. They showed a lot of passion and grind. I’m just happy for them.”