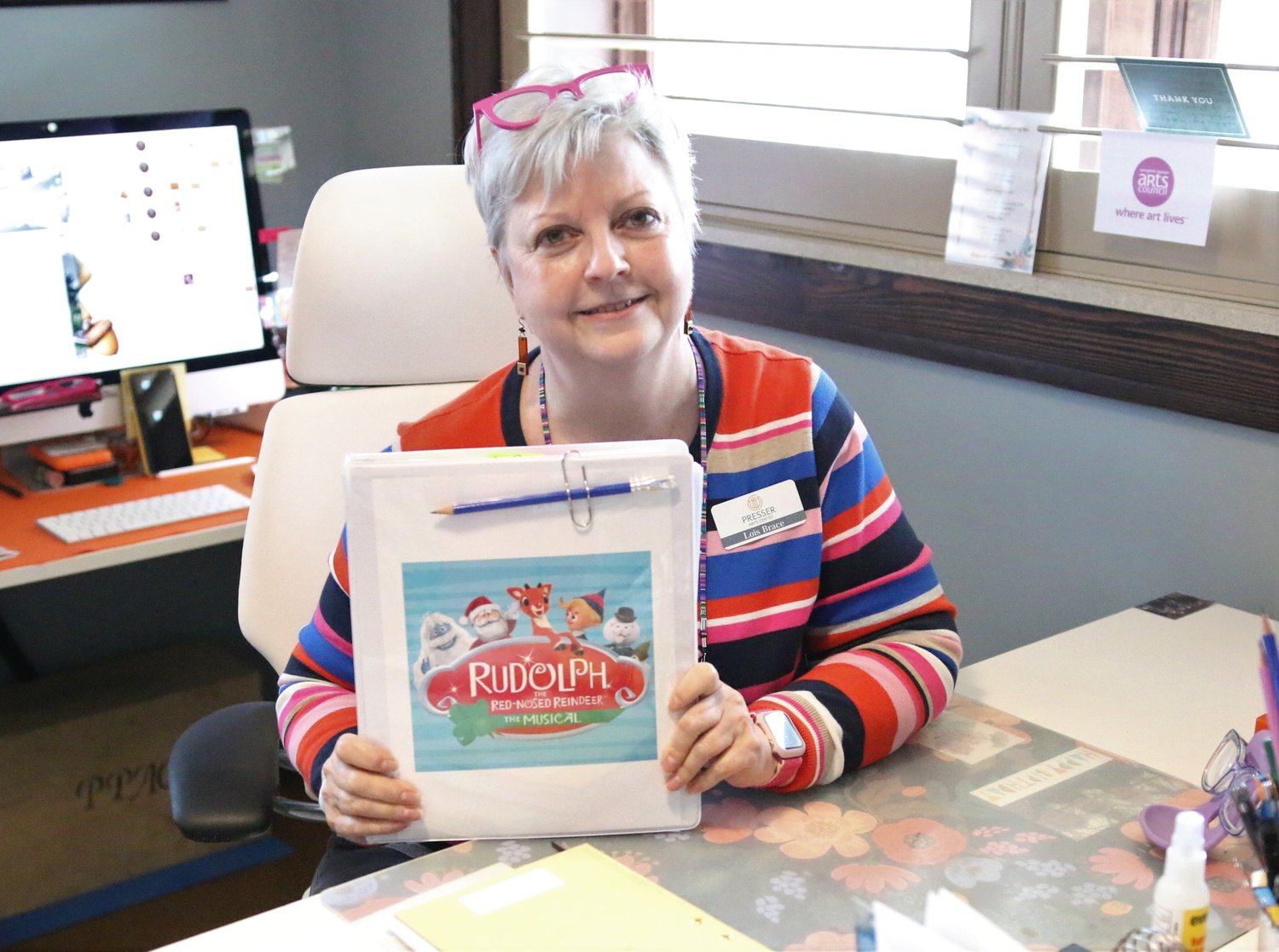 It’s the story everyone knows: Reindeer has red-lit nose. Nose is initially seen as a hindrance. Reindeer falls in love. Santa doesn’t have to cancel Christmas, thanks to the reindeer in question.

In the end, reindeer’s perceived affliction is recognized as the gift it is.

All is forgiven and all is happily-ever-after.

That story, of course, is Rudolph the Red-Nosed Reindeer and it’s a story ingrained in kids of all ages who grew up watching the Rankin Bass stop-motion classic on TV. It’s annual showing is still eagerly anticipated and its charm has transcended time, still appealing to youngsters today.

And this year, Presser Arts Center is bringing the classic to the stage. Director Lois Brace says the decision to present Rudolph was an easy one. Presser jumped at the chance to deliver to the musical “as soon as the royalties became available.”

“They have been tied up for years with the touring company,” Brace said, “so when they came out in 2020 we grabbed them ASAP.”

Auditions were held in August and rehearsals started soon after that.

Brace is a self-confessed Rudolph lover and says it’s part of her personal tradition.

“Rudolph kicks off my season for Christmas,” she said. “Even as an adult I still watch it. Perhaps I'm drawn to nostalgia or the timeless message that misfits really do belong, bullies are always wrong - even if we don't get to see their punishment - and history is shaped by the goodness in others. It's a timeless classic.”

She still remembers seeing it for the first time and subsequent years as a child.

“It would've been with my sisters sitting on the floor of our living room with a television that would've been the size of a tree stump,” she said. “I was glued to it. We knew all the songs, and sang along”.

Like many in the viewing audience, there were some parts of the show that caused uneasiness.

“The Abominable Snow Monster was really scary,” Brace said, “and I was always upset when Yukon goes over the edge of the cliff.”

With Rudolph now available, there are safeguards in place to ensure the production is true to the classic to make sure the classic stays, well, classic.

“The royalties to this production have been very specific about keeping the original Rankin and Bass costuming, set design, color palette, and visual treatment of the show,” said Brace. “We have all watched that stop-motion show repeatedly to get it right.”

The Presser production is “almost word for word just like the TV special” Brace said, adding, “I don't think anyone will be disappointed.”

Rudolph will have more than its share highlights, and the director gave some additional insight on what attendees can expect.

“Well it just wouldn't be Rudolph unless he can fly,” she said, “and there's that horrible snow storm that has to happen. But the most incredible part of this show will be the visual effects, costuming and of course the incredible talented singers and actors that comprise the production.”

Martin Keller of Mexico is the set designer, builder and scenic charge.

“Scenic charge is a rather new term that defines a person's artistic treatment to a set,” Brace explains. H”e is an incredible artist and talented engineer. I expect the audience to verbalize the opening of the curtain with gasps - it's that beautiful!”

Keller was assisted with construction by John Pasley, Leroy Brinker and Charlie Bigelow.

“She is a self taught costuming artist who has been with us for years,” Brace said. “Her visions of costuming are realized by precise stitching and hand painting. She is extraordinary.”

There will be plenty of song and dance, with a cast of characters who hail from the Audrain and surrounding counties.

“Most people will ask where the actors are from,” Brace said “They are always surprised to learn that all our talent is from the area. We have participants from the 30-mile region, all home-grown and all blessed with great talent.”

Best of all, Presser’s Rudolph- like the original - promises to appeal to all ages.

“This production will not disappoint,” Brace said, “and I would recommend it for children two years old and up. There is so much to see and lots of action.”

The show will run approximately 90 minutes and includes a 15-minute intermission.