At one point Friday night, the North Callaway boys trailed by 17 points in the fourth quarter. 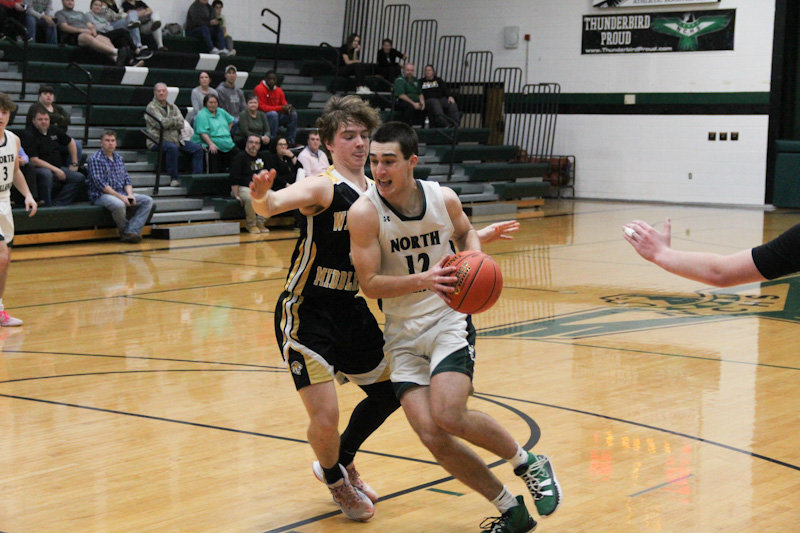 At one point Friday night, the North Callaway boys trailed by 17 points in the fourth quarter.

The Thunderbirds statistically appeared to be down and out on the road Eastern Missouri Conference foe Clopton, trailing 58-41 early in the fourth quarter, but outscored the Hawks 18-5 in the fourth quarter only for North Callaway’s last-second shot to almost go in for the 61-59 loss.

North Callaway (10-7) also missed an opportunity to tie Clopton (13-4) in the conference standings as the Thunderbirds moved to 3-2 and Clopton stayed undefeated in conference game. Regardless, head coach Matt Miller said he liked that North Callaway didn’t quit and almost defeated the conference leader on the Hawks’ home court.

“I told our boys to keep playing,” Miller said. “We get down to a couple minutes and let’s hang around and see what happens. They took that to heart.”

Miller said North Callaway had a five-footer that didn’t fall on its second-to-last possession and a desperation 30-foot 3-pointer at the buzzer that also just didn’t go down. Up to that point, the Thunderbirds found a way to counter Clopton’s potent offense.

“We tried to speed them up a little bit,” Miller said. “We were in desperation mode. You get down by that much, you’re trying to trap and trying to get steals. We got up and just ball-pressured them a lot more. Early in the first half, they were executing their half-court offense really well.”

Miller said North Callaway forcing Clopton out of its “methodical” nature helped give opportunities for O’Neal to drive to the rim, Trenton Jones scored from the low post, and Jordan Fishburn knocked down a 3-pointer, which all started from Pezold getting hot from the field.

“Once we saw the ball go in the hole a little bit and cut it to single digits,” Miller said. “You could see the look on their faces like, ‘Man, we might have a chance at this thing.’ The confidence picked up, but it just wasn’t quite enough.”

Look for the stories in the Wednesday, January 25, 2023, edition of the Mexico Ledger.