The situation looked bleak in the second quarter for the Mexico boys in the Montgomery County Basketball Tournament semifinals.

The top-seeded Bulldogs were already trailing No. 5 Hermann 21-17 … 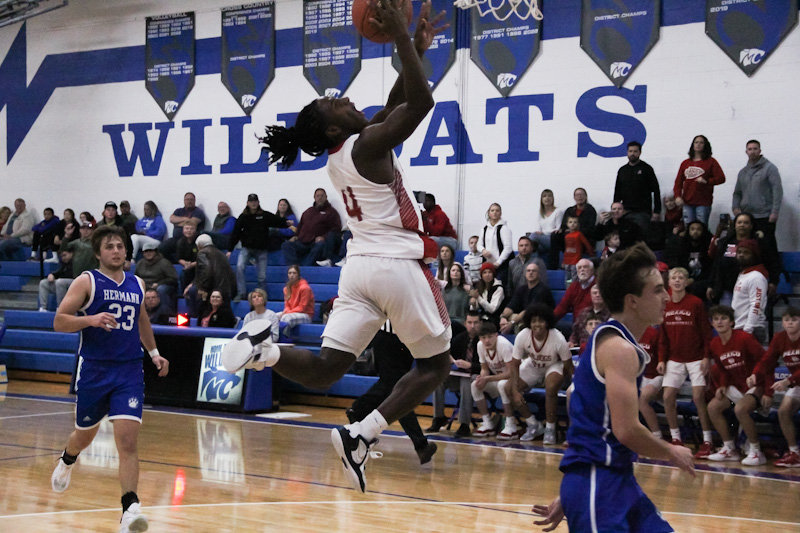 The situation looked bleak in the second quarter for the Mexico boys in the Montgomery County Basketball Tournament semifinals.

The top-seeded Bulldogs were already trailing No. 5 Hermann 21-17 with less than six minutes left in the second quarter. A bench technical foul called on Mexico turned into a 39-29 halftime deficit for the Bulldogs that was overcome for a 66-64 victory. Mexico (3-0) advanced to today’s championship game for the third straight year for a 6 p.m. matchup with No. 2 and North Central Missouri Conference rival Fulton (3-0), who defeated No. 3 Montgomery County 65-54 on Thursday.

Head coach Darren Pappas said Mexico was down by 15 points at halftime last season in the championship game of the Macon Invitational against Kirksville, which the Bulldogs won 64-54, and many of those players who made that comeback are on the team this season.

“We just talked about how we had overcome that deficit before, and we can do it again,” Pappas said. “Half of these guys were on that team and knew what it takes.”

The Bulldogs outscored the Bearcats 37-25 in the second half, coming back to tie the game at 54 at the end of the third quarter. DJ Long led with 28 points, four 3-pointers and three steals, Jordan Shelton followed with 14 points — 10 in the third quarter — and two blocks, Jaydon Eldridge had 12 points and three 3-pointers, and PJ Perkins finished with eight points, eight rebounds and two blocks. Shelton, Perkins and Dante Kelley each recorded two blocks.

For Hermann (2-1), Parker Anderson had a double-double of 21 points and 11 rebounds along with two steals, Reese Rehmert followed with 15 points and three 3-pointers, Conner Coffey had 12 points, and Nolan Brune finished with nine points off the bench.

Pappas said the technical foul was called when one of his coaches tried to communicate with him. The officials misunderstood and ruled it a technical, awarding Hermann four additional free throws that were all made by Coffey (8-for-8 from the line) after the free throw made by Anderson after a foul on the shot.

Pappas said he had to stay seated, per rule, but was confident that his players would respond well to the adversity. His players even did some coaching on the floor, even though Pappas’ seated state didn’t prevent him from giving instructions, which helped Mexico tie the game heading into the fourth quarter.

“They came to me — Jordan Shelton and Anthony Shivers — and they said, ‘This is what we want to do,’” Pappas said. “That’s seniors being leaders. They called the defense, and I just let them do it.”

Perkins was a force on the defensive end, Pappas said, and came through when it counted the most. When Mexico was down 64-63 in the final minute, he blocked a shot that transitioned smoothly into an Eldridge pass to a Long layup for the deciding basket.

The junior Long has reached double-digit points in each of his first three games this season and was responsible for many crucial buckets on Thursday night.

Pappas said Long means much more when it pertains to being a “floor general” as Long called a set that led to Eldridge knocking down a 3-pointer in the corner, making it a 64-61 game with a minute left.

“He’s reading what the defense is giving him,” Pappas said. “He can get to the rim and shoot from the perimeter — his perimeter shooting is much improved this year. I can’t say enough about him.”

Despite Mexico’s early defensive energy, Hermann had a 17-13 lead after one quarter before taking a commanding halftime lead. The Bulldogs decided to give the orders in the third quarter and were sparked by the play from Shelton.

Shelton picked up a couple early assists in the third quarter to bring Mexico within seven points before his teammates followed to cut the deficit to three on multiple occasions. Long nailed a 3-pointer and Shivers received a pass from Long before capping a 3-point play before Shelton spun around in the air on the fastbreak layup that went for a 3-point play, tying the game at 54.

“We talked, offensively, about what we could do against their 3-2 zone,” Pappas said. “We did a better job getting some shots around the rim to go in and hopefully that would open up some perimeter shooting.”

The perimeter was indeed open for Mexico and the sophomore Eldridge, who made all three of his 3-pointers in the second half — two in the fourth quarter. Pappas said that while the undersized Mexico couldn’t do “a whole lot” against the 6-foot-3 Anderson, the Bulldogs make up for it and did so again Thursday with their athleticism.

Mexico has two comebacks in the waning seconds of games this season already, defeating Fatima on the road 58-56 and now edging Hermann. Pappas said the Bulldogs are showing good signs early and hopefully will be well-rested for today’s championship game as they go for their third straight Montgomery tournament title.

“Hopefully, our legs aren’t dead after this, but luckily, we have tomorrow (Friday) and Saturday (today) to rest for a Saturday night game,” Pappas said. “We’ve got to do a better job on both ends of the floor.”