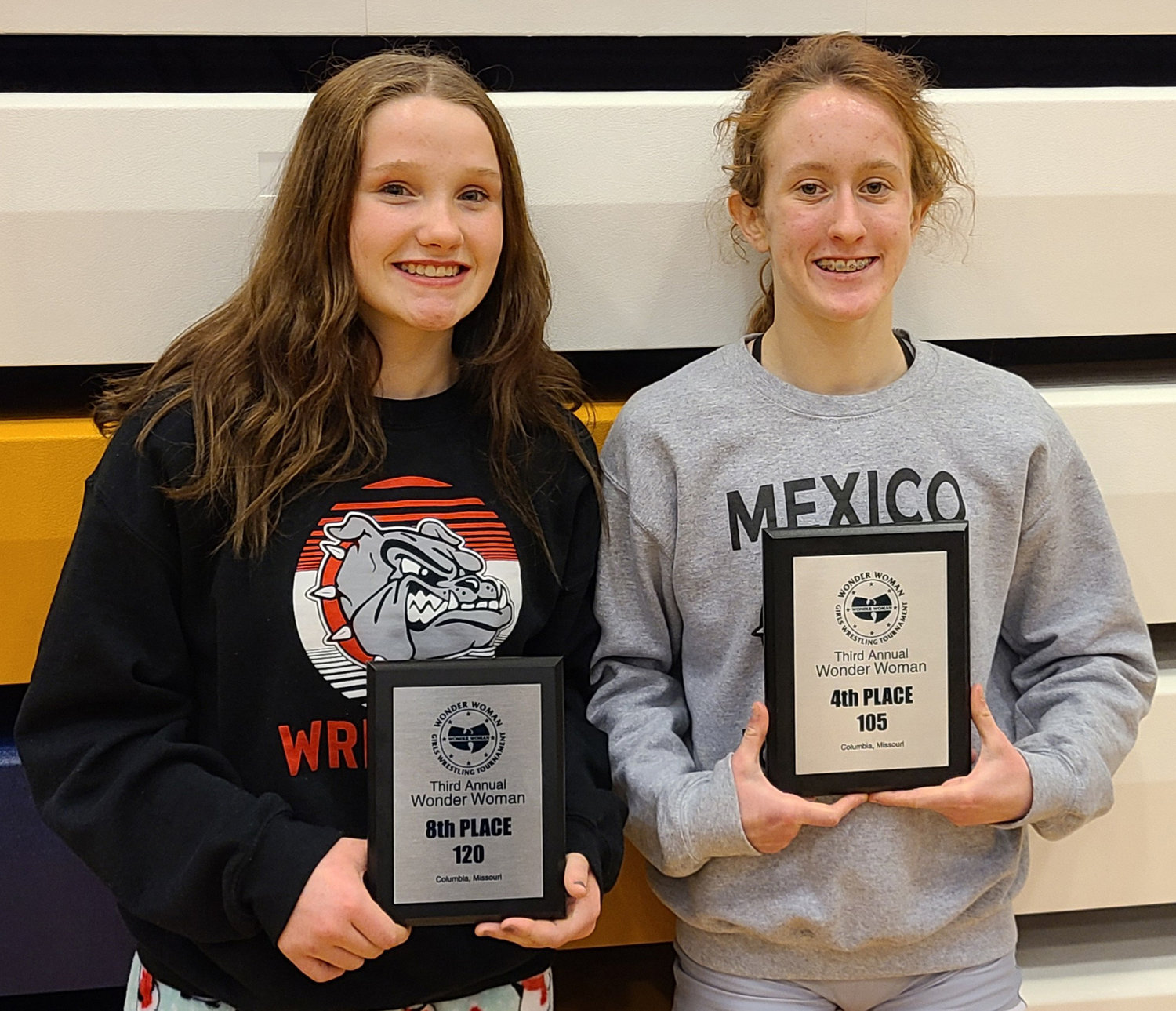 Hosted by Battle High School from Dec. 29-30, the illustrious event drew teams from across the state, as well as competitors from Illinois, Iowa and Oklahoma.

“This is one of the largest girls’ tournaments in the nation,” said Mexico head coach Tony Senor. “At any level. We’re talking college, high school, youth. It was intense, to say the least. And every single bracket was loaded.”

Despite the grandeur of the event, Senor was even more impressed with how his team performed against top-tier talent in just its second season.

Sophomore Katie Bowen, who had been wrestling at 110, dropped to 105 and faced a class loaded with state-ranked wrestlers.

“Honestly, just having the guts and the bravery to do that, that takes a lot,” said Senor. “I’m really proud of her for saying, I’m going to wrestle in this bracket, I’m going to go chase this competition.”

Bowen ripped through the competition early, picking up four pins to lead to a semifinal matchup against eventual champion Jaden Breeden. Though she dropped a tight 2-0 decision, her day was far from over.

Falling to the consolation bracket, Bowen found herself matched up against a familiar foe in Alyssa King of St. Charles.

The two faced off twice last year, with King winning by fall over Bowen both times. First, in the Seckman Women’s Tournament in January, and again in February in the Sectional Championship match.

Bowen would get the last laugh of 2021, though—handling King in an 8-1 decision.

“To go out there and to win 8-1 is a huge improvement and a huge accomplishment,” said Senor. “I’m so proud of Katie and her work ethic and how she worked in the off-season for that.”

Bowen dropped another heartbreaker in her final match, falling 2-0 to Audrey Scherer of Lindbergh in the third-place contest to finish fourth.

Sophomore Abby Drew was the only other Lady Bulldog to place on the day. She too dropped weight classes, settling in at 120 after previously competing at 125 and 130.

Drew fell to Alyana Roling (Blair Oaks), but responded in the consolation bracket with three consecutive wins to get herself in position to place.

“Abby wrestled lights out,” Senor said. “She had to wrestle a lot of matches to get where she was at.”

“Abby kept her head up, she kept focused and she kept going and wrestling,” he explained. “And that’s what’s key. When you get on the backside of any kind of big tournament like that, you’ve got to just dust yourself off and move on and get mentally ready for the next match.”

Tolbert and Pehle each opened their respective classes with byes before picking up the Bulldogs’ final wins on the day. Tolbert defeated Natalie Bennett (Southern Boone) by fall and Pehle pinned Payton Coe (Odessa).

“I’m very proud of her performance,” Senor said of Tolbert. “She’s going to improve and keep getting better and better.”

Pehle is in a similar spot to Tolbert, showing consistent improvement and great potential.

“She’s on that same level,” Senor explained. “We’ve gotta clean up one or two things and then she’s going to be over the hump.”

The Lady Bulldogs scored 45 points in total, good for a 40th place finish out of 76 scoring teams.

“They responded well when they lost and they wrestled really well in their next matches, regardless of the results,” said Senor.  “I was very pleased overall with the team.”

“No matter who you’re wrestling,” he continued. “It doesn’t matter if they’re a state champion or a brand-new wrestler—we’re going to be ready to wrestle.”