Frazier had been recruited by seven schools and contacted by more. … 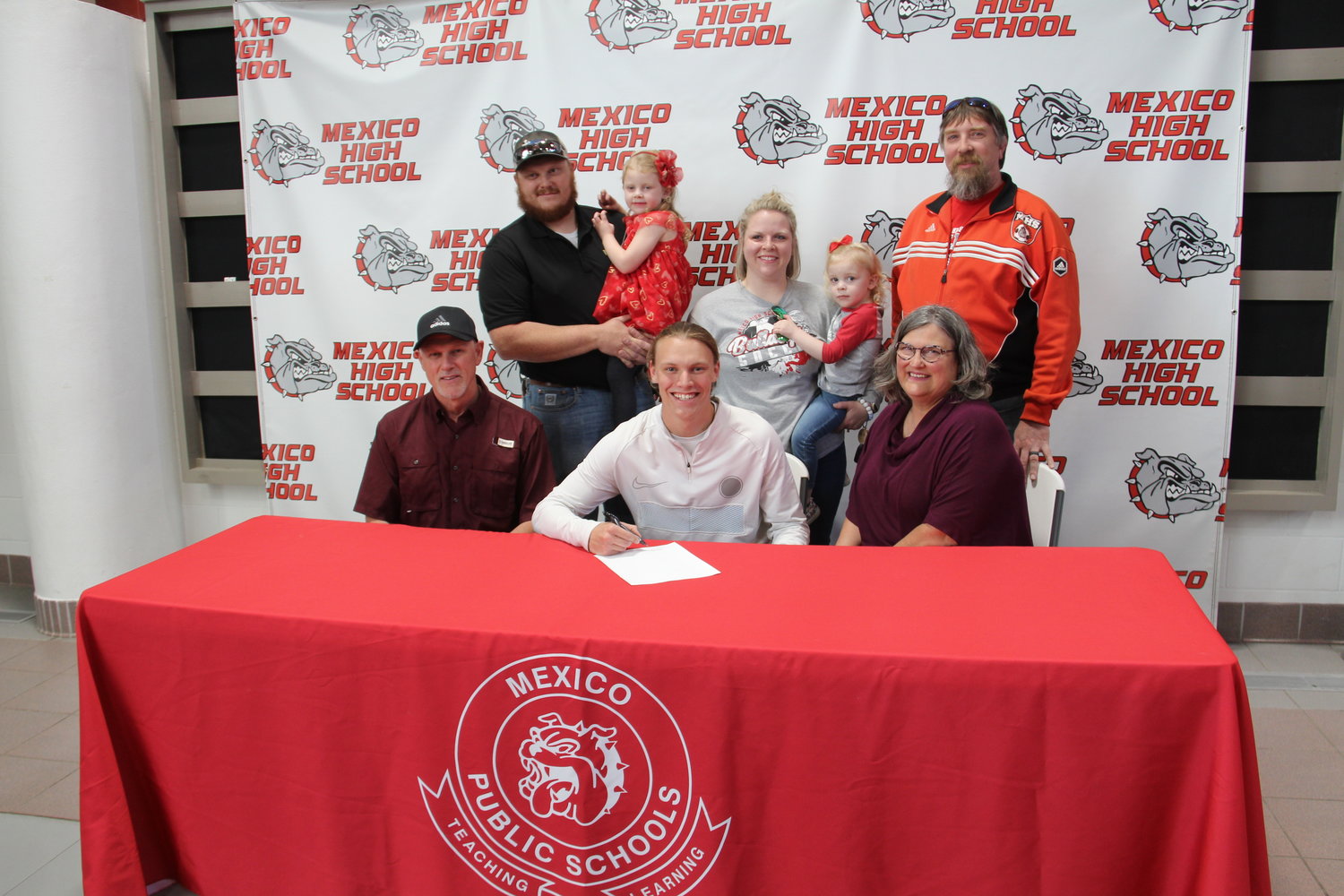 Multi-sport standout Haden Frazier signed to play soccer with the Division 1 Jefferson College Vikings in Hillsboro recently at Mexico High School. Frazier was joined by friends, family and his teammates for the event. Above, Frazier signs as his father, Jeff, and mother, Margaret look on. In the back row is his older brother, Caleb, his wife, Jenna and their kids, Phoebe (with Caleb) and Claira (with Jenna) and coach, Bill Gleeson. [Nathan Lilley Photo]
Posted Friday, May 13, 2022 11:50 am

Frazier had been recruited by seven schools and contacted by more. And in the end, his selection was down to three schools. Among college’s vying for the Bulldog senior’s services was William Woods University, who offered a full ride track scholarship, but he wanted to pursue soccer.

Division 1 Jefferson College has earned a reputation for its soccer program, having won a national championship and overall competing well at the national level. Last year they finished 14th in the national rankings.

That factored heavily in Frazier’s decision, complemented by the coaching staff, and proximity to home. Located in Hillsboro, there should be plenty of opportunities for friends and family to catch Frazier and the Vikings in action. He will start working out with the team in early fall.

Beyond soccer, Frazier played tennis his freshman and sophomore years. His junior year was canceled due to COVID and this year he has made an instant impact on the Bulldogs track team.

“He has been playing soccer since he was four,” said his dad, Jeff. “He has always liked soccer and has enjoyed growing up in soccer with his brothers, his friend Dominic McKeown and the rest of the McKeown family.”

Beyond playing, Frazier is a student of the game and enjoys international soccer and following his favorite players and teams.

“He has learned a lot of world geography and country’s flags from following international soccer over the years,” said Jeff. “One of his favorite soccer events was the World Cup international tournament put on by the McKeowns at their house.”

The McKeowns and Frazier families, along with other soccer-playing friends, were divided into two teams of England versus USA. Dr. McKeown is British and two of his children were born in England, so naturally, they are England fans.

“They had to make a flag and the country’s anthem would be played when the teams entered the pitch,” said Jeff. “The games were held at the McKeowns’ - in their yard - and were quite entertaining and competitive.”

During his senior season with the Bulldogs, Haden Frazier had 33 goals, four assists, and four hat tricks. He has the school record for most consecutive games scored in with eight - and accomplishment he’s achieved twice while at MHS. He’s earned All-State, All-Regional and All-Conference honors over his high school career.

Fun Facts - Beyond the Soccer Field

Haden performed at the Muny in St Louis for four years in plays such as Meet Me in St Louis, Music Man, Beauty and the Beast, Jesus Christ Superstar, and Newsies. He also performed at Presser Performing Arts Center in many plays as an actor, singer, and dancer. He was a member of a hip hop company based out of COCA performing arts center in St Louis and was an original member of KODE REDD, a hip hop performance company.

He is a member of MHS Fellowship of Christian Athletes and also enjoys snow skiing and writing and recording music in his studio.

It’s been a busy signing season at MHS of late, with fellow soon-to-be alums Isaiah Reams signing to play basketball for North Central Missouri College last Friday and Ricky Juarez signing with Iowa Western for wrestling Friday. Watch The Ledger for more on these signings.