Elliot Goodwin has been playing soccer since he could walk on to a field. He plans on not walking off any time soon. 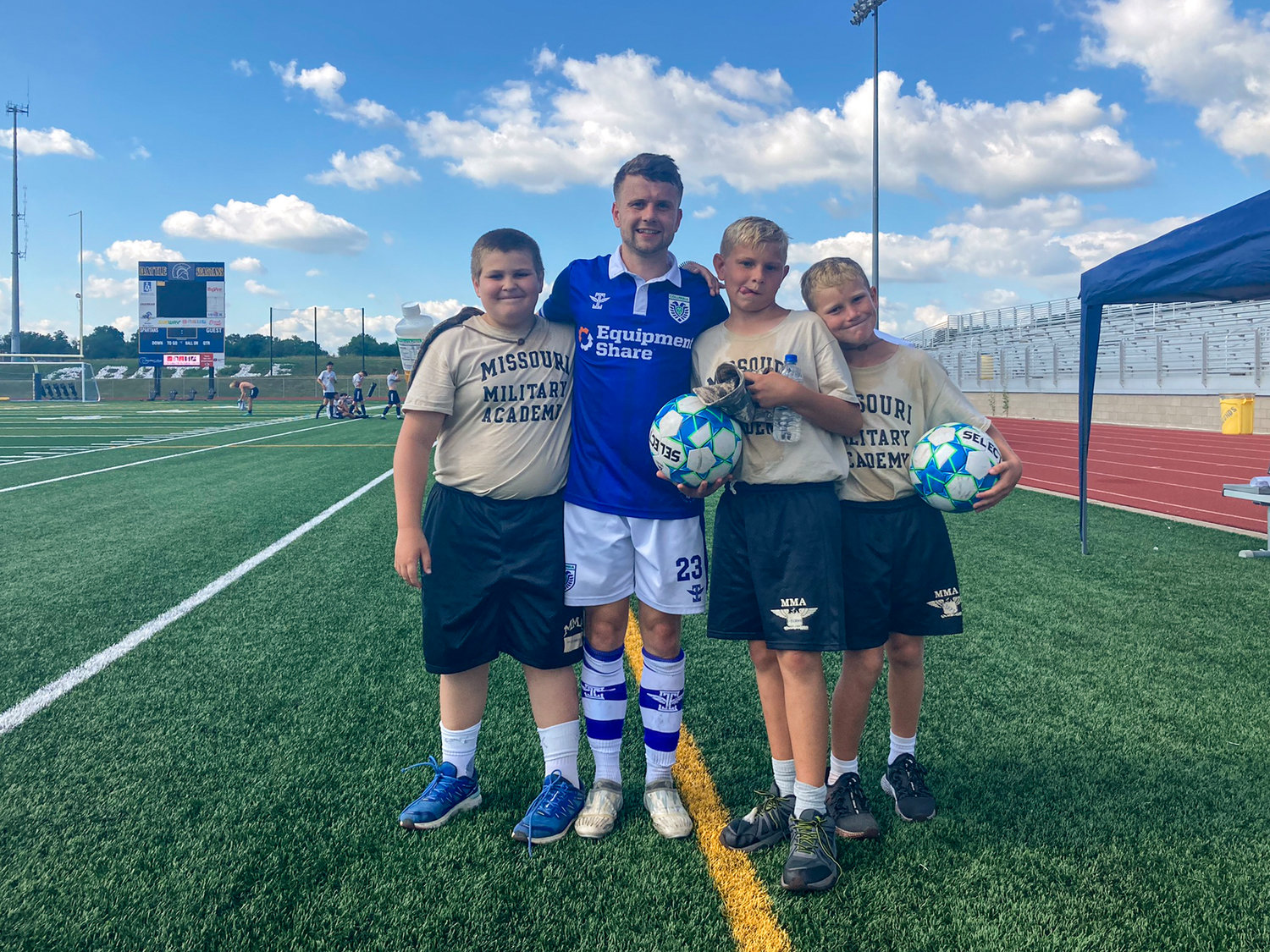 AFC Columbia captain and Missouri Military Academy soccer head coach Elliot Goodwin is pictured with some MMA Confidence Camp kids at an AFC Columbia game July 9 against Ajax St. Louis at Battle High School in Columbia. After growing up around soccer and developing a passion for it in his native England, Goodwin moved to the United States to play the game he loves and picked it up again years later with semi-professional team AFC Columbia.
Submitted photo
Posted Wednesday, August 3, 2022 9:27 am
By Jeremy Jacob, Sports Editor

Elliot Goodwin has been playing soccer since he could walk on to a field. He plans on not walking off any time soon.

The 27-year-old head coach at Missouri Military Academy served as captain this year for the AFC Columbia semi-professional club in its inaugural season in a semi-professional league. Goodwin, who is originally from England, didn’t get his fill of soccer after playing his final college season in 2016 with NAIA Cumberland University in Tennessee.

“With COVID and everything like that, I got the ball back at my feet because I was alone,” Goodwin said. “It just gave me something to do again instead of watching other people do it and encouraging others and teaching others. I wanted to get it back myself.

“I jumped in when the kids were training all the time. I always want the ball at my feet, either showing demonstrations or the kids are saying, ‘Oh coach, can you show me how to do this?’ It just grew from there.”

Goodwin said he went into the tryouts for AFC Columbia, who play games at Battle High School, not knowing what to expect as he just wanted an opportunity to play near Mexico. He discovered there were many talented players there, who were also younger than him as many were in or not far removed from college.

The more than 40-minute commute to Columbia didn’t faze Goodwin as playing the game he loves is worth the drive, he said. Besides, he has traveled much farther for an opportunity.

In 2013, Goodwin said he made the trip across the pond to Cumberland. After spending a year playing for Saint Louis FC, his coaching career began – and his playing career temporarily stopped – in 2018 when he was a graduate assistant at McKendree University.

“As the captain, I use my coaching abilities and bring it back into the game,” Goodwin said. “I could use that to encourage and move the team forward with my coaching mindset. I’ve played the game a long time. I played for a lot of different clubs at different levels.”

Goodwin recalls playing soccer ever since he could “walk and talk” as the game has meant a lot to his family. His grandfather and father both played, and Goodwin remembers carrying on that tradition no matter the conditions.

In the United Kingdom, Goodwin said children play soccer on the streets and muddy fields and are even willing to set up playing fields themselves. Goodwin remembers setting up nets in school so teams could play later in the evening and even competed in the rain as his father watched Goodwin play numerous times in high school.

The fun aspect of soccer was fully realized for Goodwin, though, under the tutelage of former Manchester United star Gordon Hill. Hill, who played in Kansas City for the city’s Major Indoor Soccer League Comets team in 1983-84, held a school for children in England and was an experience Goodwin has never forgotten.

“He was the real trigger that made the game fun for me,” Goodwin said. “I probably really didn’t know what I was doing, but I was so attracted to his coaching, the way he made it fun and the way he made it enjoyable while you were playing the game.

“You don’t want to be that coach that starts yelling on the sidelines, but he never was. He was someone we would always play games. It always put a smile on our faces just telling jokes and just having a great time.”

Adopting that attitude on the field and to his coaching has helped Goodwin stay with the game as long as he has, he said. When Goodwin encounters players who are new to the game as a coach or new to the level of play like at AFC Columbia, he said he has the same goals.

“I want to help you become the best player you can be,” Goodwin said. “Even if it’s your first year of playing, how do we get you from A to B? How do I get that smile on your face that I once had? Can we make it enjoyable while also in an environment where they are learning?

“It’s a great game. It’s enjoyable. You’re playing with 10 of your best friends at the end of the day.”

Now he’s been in the United States for about a decade, Goodwin said he has enjoyed his time and is excited for the future. He didn’t reach the towering popularity of a David Beckham, a role model of his after making the trip from England, but feels like he has much in his life.

Goodwin thinks he can give so much as well, particularly when it comes to AFC Columbia. Going into the final two games on its schedule, Goodwin’s team was tied for first with Ajax St. Louis in the South Conference standings in the Midwest Premier League. Even if AFC Columbia doesn’t make it into postseason play, Goodwin still likes how the season has gone.

“We definitely competed this year,” Goodwin said. “The biggest thing we could’ve done is really put our foot into the mix. People look at AFC Columbia and think, ‘OK, they are going to be something.’ Achieving what we’ve achieved this year is really good. If we would’ve come in and been a team that everybody beat 6-0, then nobody is talking about us. We’ve done so well not letting that happen.”

The coaches for AFC Columbia are there when they observe something that needs to be fixed, but Goodwin said the players are given more leeway because of the experience each player brings to the field. To grow the game for their club and in the area, Goodwin thinks the players need to take similar initiative and “bring the energy” like they do during play.

Goodwin said the club is selling merchandise and season tickets but would like to bring in more players. He said Columbia is in a good area with various local colleges that can spread the word like Columbia College in town and William Woods University and Westminster College in Fulton that could attract new faces to the team.

Far into the future, Goodwin envisions himself as the coach, the recruiter and the advocate for the game. He also hopes he can be the player for a while longer. One thing for certain is Goodwin will go until he can’t anymore.

“It’s certainly hard to let go,” Goodwin said. “As I get older, the aches and pains last a little bit longer from the game. It’s in the forefront of my mind to help (AFC Columbia), but at the same time, I’m not going to stop playing any time soon. When the times comes, when my old legs won’t move anymore, that’ll be the time to hang up the cleats. Hopefully, that doesn’t come any time soon.”