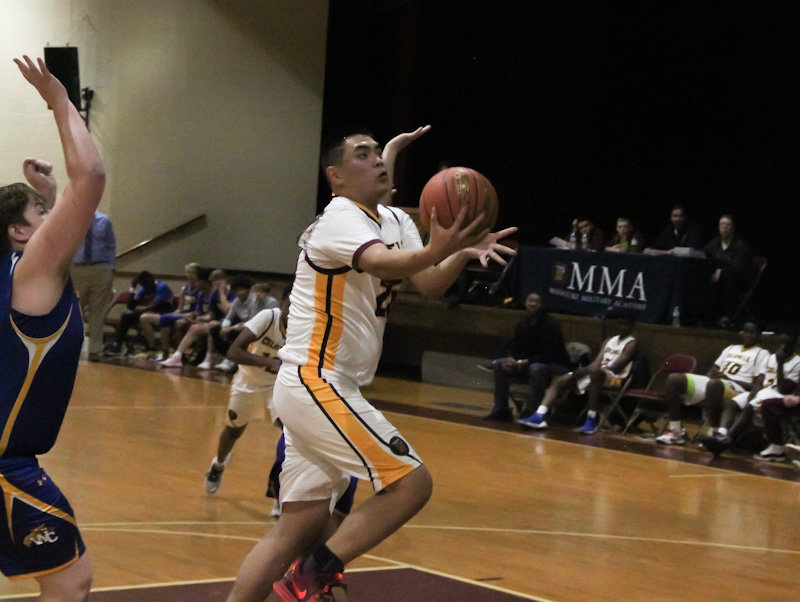 MMA was coming off scoring 66 points in a one-point overtime win the night before against Sunnydale Adventist Academy in Centralia but needed to go the next night in its home opener. The Colonels allowed seven 3-pointers and didn’t score double-digit points in the first three quarters in a 51-29 loss.

MMA (1-2) relied heavily on its 6-foot-2 senior big man from Mongolia, Tsengeg Bayasgalan, as he was at the center of the offense. He finished with 12 points, 14 rebounds and one block. Albert Ogutu followed with nine points, four rebounds and two blocks, and Kellan Mugisha pulled down eight rebounds.

Head coach Roger Siwak, who is in his first season with MMA, said MMA just didn’t shoot the ball well enough early on or just play as smoothly as it needed to in order to not fall behind.

“Our first half tonight, we didn’t play well — didn’t handle the ball well, didn’t get good shots up, missed most of what we shot,” Siwak said. “The fourth quarter was better. We challenged our guys to win the fourth quarter. I was proud of the effort at the end.”

Siwak said he saw that energetic effort throughout the game and through the Colonels’ first three games. He was especially impressed with his players’ effort following a tight overtime victory the night before because it is already difficult to play on back-to-back days.

Ogutu and Mugisha were consistently soaring in the air for rebounds to complement Bayasgalan, who paced the floor all night on the boards, and to help MMA finish one behind Wright City in a 35-34 rebound margin. The pair each had at least a block, including when Mugisha ran coast to coast to deny a Wright City transition bucket in the second quarter.

“They played hard,” Siwak said. “Mugisha goes to the boards hard, and he really works hard.”

MMA had a few point-blank range shots not fall early in the first quarter only for Wright City to take a 6-0 lead that turned into a 13-4 first-quarter lead for the Wildcats. Duan McRoberts capped the quarter with a 3-pointer to beat the buzzer.

This was the beginning of a trend from beyond the arc for Wright City. After Bayasgalan knocked down a 3-pointer to start the second quarter, the Wildcats closed the first half on a 19-2 run to take a 32-11 halftime lead. Wright City knocked down three 3-pointers following McRoberts’ make.

“We didn’t get our hands up enough,” Siwak said. “They made the extra pass really well, and they moved the ball well. We didn’t guard it as well as we could have.”

Even though MMA’s shots weren’t falling as frequently as Wright City, Bayasgalan was a mismatch for Wright City in the post all night. The Colonels didn’t score for a little more than the first five minutes in the third quarter until Bayasgalan spun around in the post through two Wildcat defenders for the layup.

MMA shut out Wright City for the majority of the fourth quarter but found ways to score the basketball, including when Bayasgalan barreled inside for a 3-point play. He knocked down MMA’s first free throw of the night in what was the team’s second attempt from the line to clinch his double-double and a 12-7 fourth quarter for the Colonels.

“He’s making a lot of progress,” Siwak said. “It’s his first time playing in the U.S. He’s getting to the basket at times and he’s rebounding well. In three games, he’s made a lot of progress. I see him contributing inside, getting to the basket from the outside, and rebounding. Varsity basketball is a much faster game than these guys are used to — most of them — so they’ll learn the speed and learn to transition.”

MMA played at Tuscumbia (1-2) on Friday night before it travels to Jefferson City on Tuesday to play Calvary Lutheran (2-0) at 7:30 p.m.

“I’m proud of the teamwork we’re starting to develop,” Siwak said. “These guys really hadn’t played together, except two guys from last year — one played mostly JV and one played some varsity. We’re taking guys from disparate parts of the country and the world, and they’re developing a team and I’m proud of that.