When they are both rolling, the North Callaway girls are hard to stop. 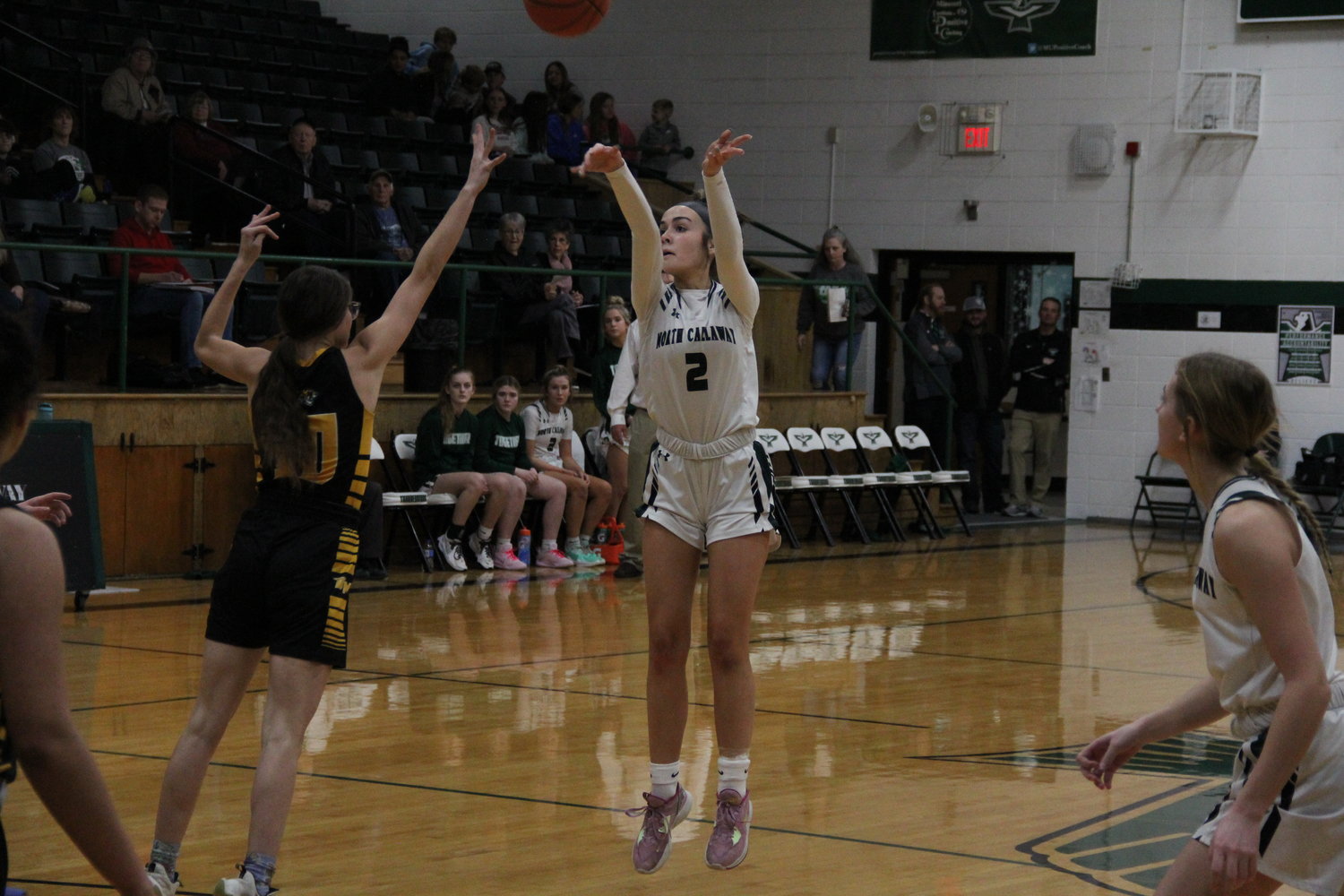 North Callaway's Natalie Shryock launches a 3-pointer Tuesday night at home against Wellsville-Middletown. Shryock finished with a game-high 24 points, hitting six of 10 Ladybird 3-pointers. Junior Riley Blevins had the other four as part of her 14 points.
Jeremy Jacob Photos 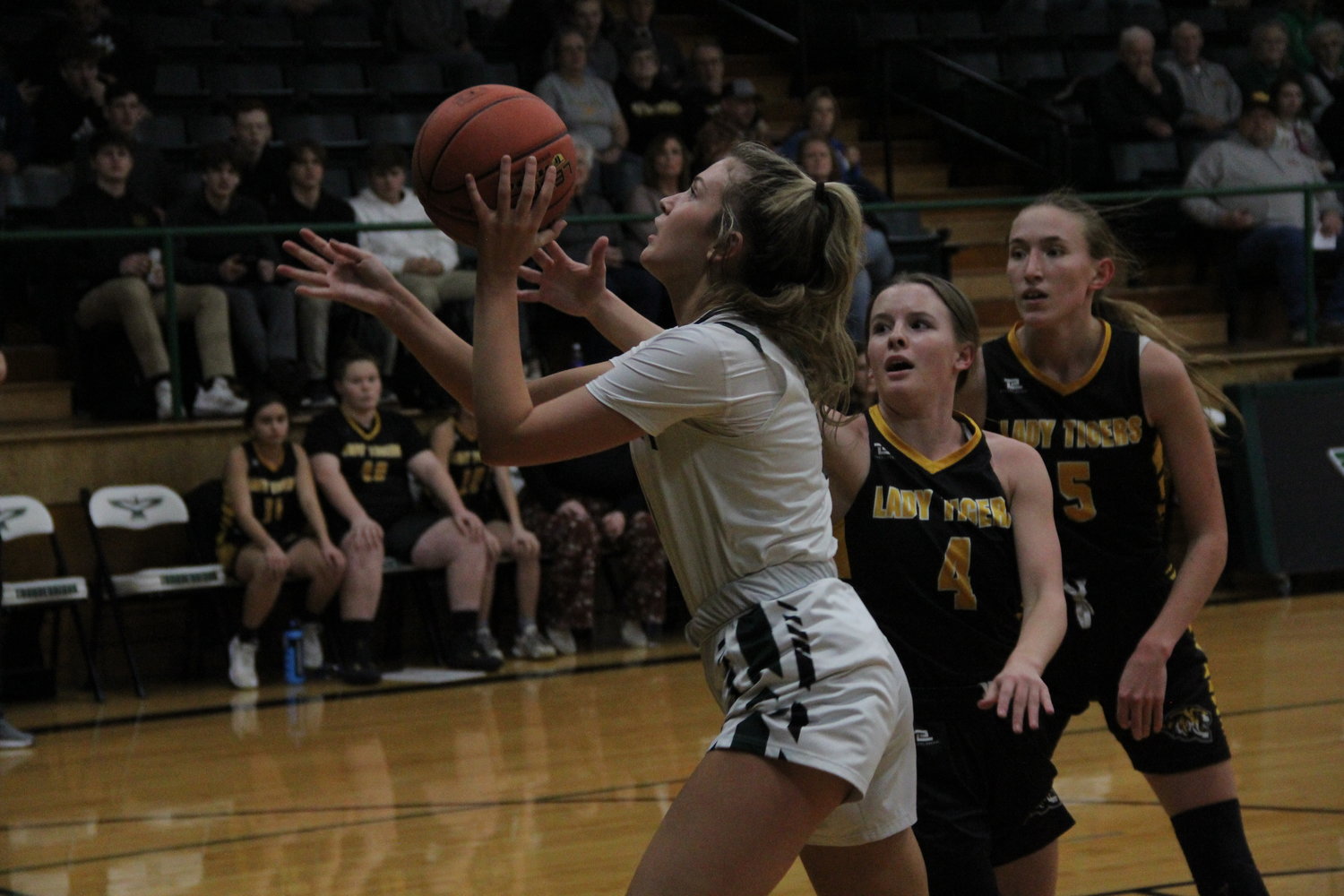 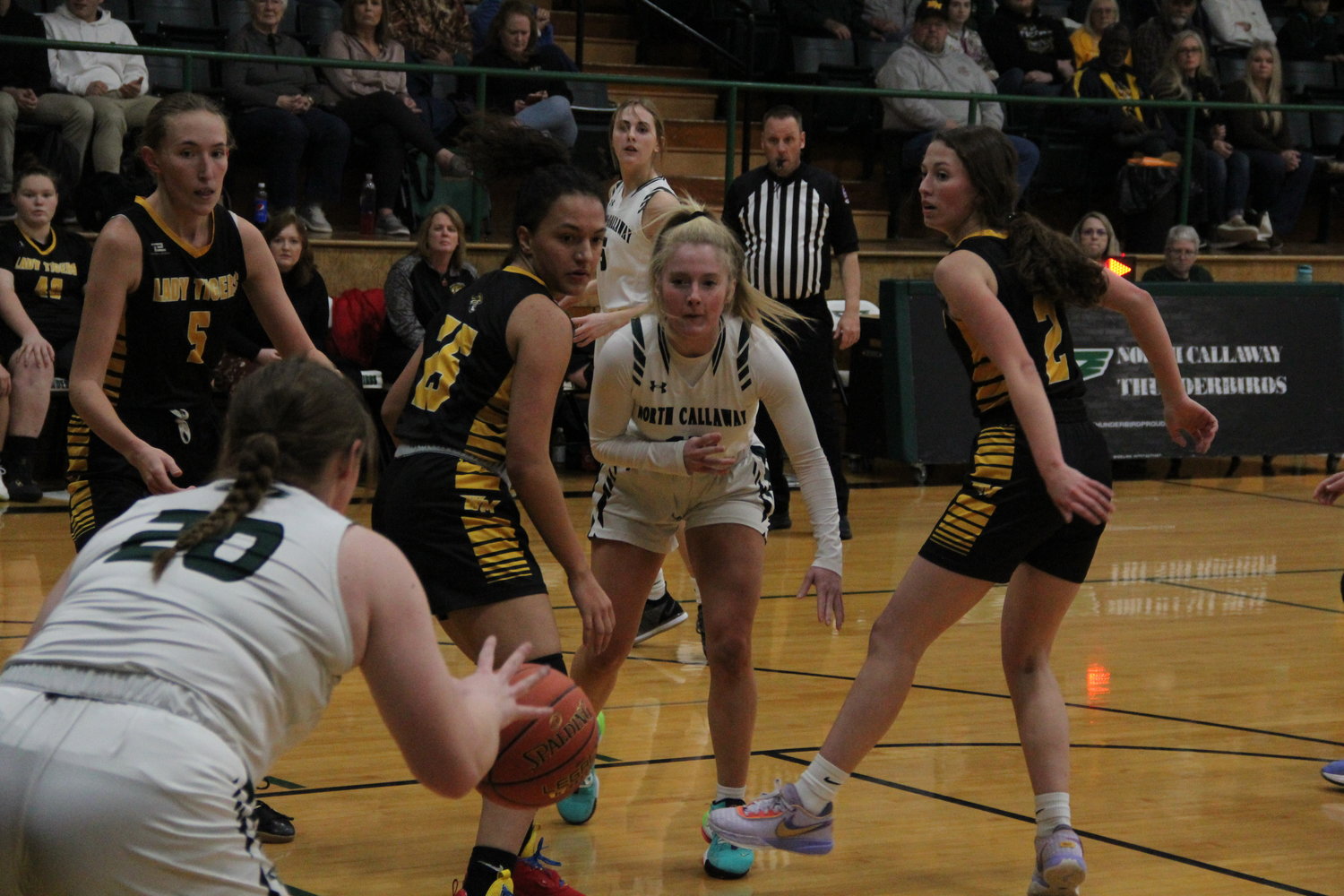 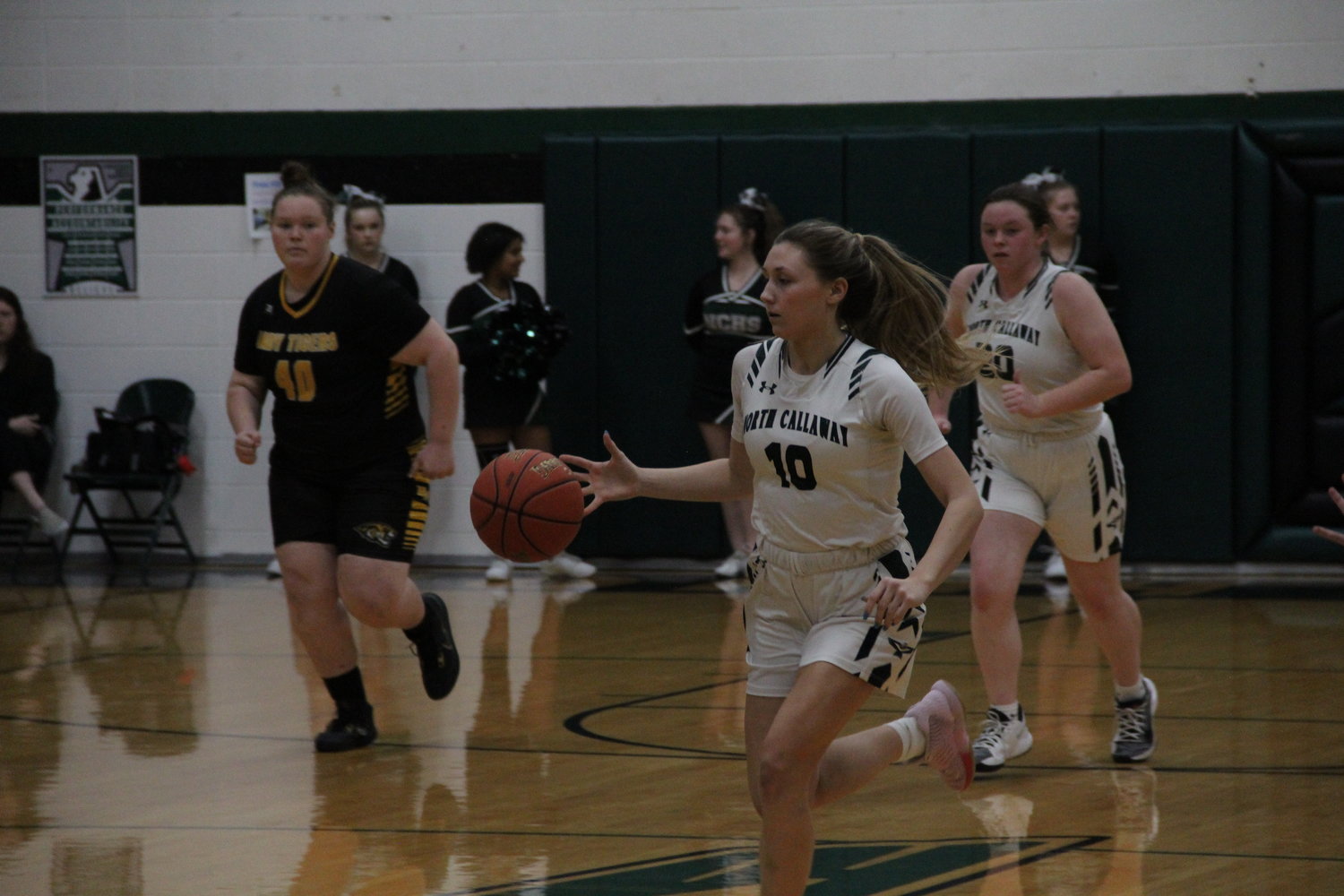 When they are both rolling, the North Callaway girls are hard to stop.

Natalie Shryock and Riley Blevins combined for 10 3-pointers to tie a season-high total for the Ladybirds as they defeated Eastern Missouri Conference foe Wellsville-Middletown 61-37 on Tuesday at home.

Head coach Tim Turlington said the success from the perimeter starts from within the arc as Blevins finished with four assists behind Abrielle Burgher’s team-high eight. Shryock had 24 points off six 3-pointers, Blevins scored 14 points thanks to four 3-pointers, Ellie Bedsworth had nine points and Lakyn Hartley added eight points off the bench.

“With those two floating around the perimeter, they have to respect it,” Turlington said. “One thing both girls have been doing better and very well the last month or so is penetrating and hit the jumpshot, penetrate, pull and kick, and all that kind of stuff. We can be hard to guard when we’re playing like that.”

Turlington said North Callaway’s offense has been executed like that before this season but “probably not to that large of effect.”

North Callaway (11-7, 3-2 EMO) led 13-5 after one quarter, with Wellsville (8-5, 1-2 EMO) scoring its first field goal in the closing seconds of the first quarter. Wellsville drew as close as 22-12 after a steal and score from Indica Scott. But then the Ladybirds secured a commanding lead before halftime.

The Lady Tigers didn’t eclipse double-digit scoring in a quarter until their 15 points in the third quarter. Bethany Slovensky finished with nine points, Hallie Guzy followed with seven points, and Natalie Boeckelman had six points and seven rebounds.

“We watched some tape today because we played yesterday,” Turlington said. “Our prep was literally 15 minutes of film today. We weren’t as prepared as I’d like for us to have been, but having said that, we took them out of a lot of the stuff they wanted to do. Sometimes, depending on the set they’re in, we’d take away this cut, this pass and that disrupted some timing and it also pushed them out toward the perimeter.”

Turlington said he was glad the Ladybirds were able to play man-to-man defense effectively some of Tuesday after getting into foul trouble in Monday’s game against Fayette.

Wellsville did decrease North Callaway’s lead to as low as 41-25 with a 7-0 run in the third quarter, but that didn’t occur in the fourth quarter thanks to the Ladybirds’ foul shooting. They finished a perfect 13-for-13 at the free throw line, making eight of those foul shots in the fourth quarter. The Ladybirds only had one other game where they were perfect from the line, which was a 2-for-2 outing in a loss at Montgomery County.

“To close out games, or to extend leads, or to get back into games, if you get to the line, you’ve got to knock them down,” Turlington said. “The girls have been doing a really good job of that — stepping up and stroking it. That’s huge because that’s the kind of stuff, when it’s tight and you need it, you feel good about it and get a little bit more confidence about yourself.”

The North Callaway girls experienced Thursday what they hope isn’t a sign of things to come.

The Ladybirds lost 69-54 to Eastern Missouri Conference foe Clopton days before the teams meet in the first round of the Bowling Green tournament at 5:30 p.m. in the middle school gym. Natalie Shyrock tied a school record by hitting seven 3-pointers in the game.

Clopton (9-7, 2-2 EMO) knocked down 10 of its first 12 shots to surge to a 21-14 lead after the first quarter. North Callaway (11-8, 3-3 EMO) battled back to within one point after a 10-0, but that was answered with a 10-0 run by Clopton. The Ladybirds’ defense only mustered a season-low two steals against the effective Lady Hawk offense.

“We just couldn’t get over the hump and get any closer than that,” Head coach Tim Turlington said.

Shryock finished with 24 points and eight rebounds to lead North Callaway, and Riley Blevins followed with 14 points and five assists.

Madelyn Brune led Clopton with 17 points, including 12 points and an 8-for-8 performance at the free throw line in the fourth quarter, Jasmine Hammett followed with 16 points, and Braya Smith had 11 points.

The North Callaway girls didn’t start pulling away from Fayette on Monday night until the second half.

“We came out and played a really good second half, especially on the defensive end,” Turlington said.