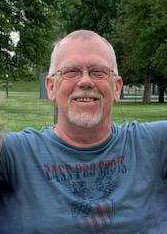 Robert was a fan of music, disc golf, floating, kayaking, the outdoors and fishing. His real love was his grandchildren, and his fur babies Max, Crystal, Hazel and Buddy.

He was preceded in death by his parents and one sister Pamela Turner.

Memorials may be made to the family.

Condolences to the family may be given at pickeringfh.com.