The Mexico boys had several thrilling comebacks three games deep into this season. 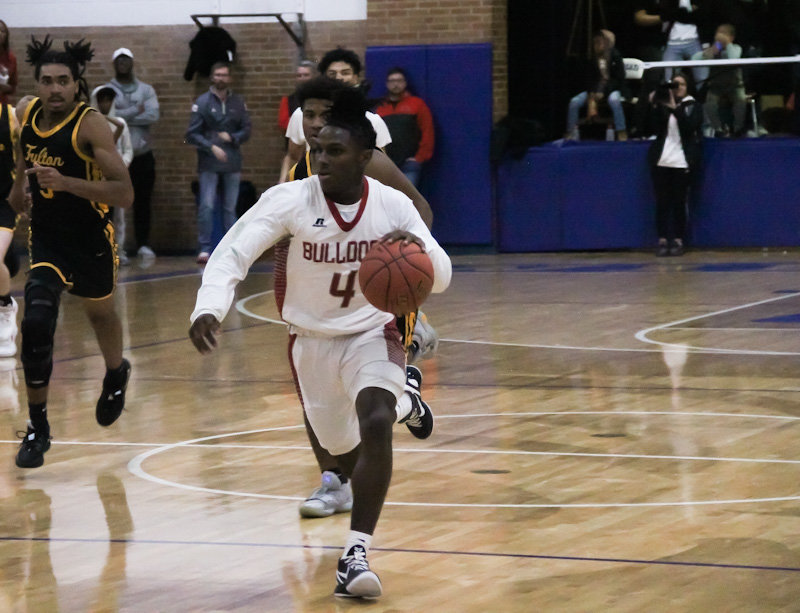 The Mexico boys had several thrilling comebacks three games deep into this season.

The Bulldogs worked themselves into too big of a hole Saturday night as they lost 69-52 to North Central Missouri Conference rival Fulton in the Montgomery County Basketball Tournament championship game. The Hornets spoiled Mexico’s attempt at repeating as tournament champions following Mexico’s 73-61 victory in last season’s title game.

Mexico (3-1) was held to its lowest point total at halftime so far this season as it trailed 28-13 at the break and ended up allowing its most points as well. The Bulldogs had already beaten Fatiima on the road after trailing by seven going into the fourth quarter and came back Thursday to defeat Hermann despite being down 10 points at halftime.

Head coach Darren Pappas felt the struggles on the defensive end loomed larger and played a bigger role in Mexico falling behind 12-0 in the first quarter. Pappas said Mexico was aware of the scoring threats for Fulton (4-0) and thought the game plan wasn’t any different against the Hornets this time, but the execution wasn’t there.

“Defensively, we didn’t do a very good job of closing down gaps,” Pappas said. “Getting backside help on their big. We knew (Colby) Lancaster’s a load so it was going to be tough anyway. Rotations were a little slow.”

Jordan Shelton led the Bulldogs with 28 points, seven steals and two blocks, scoring 20 of his points in the second half. Jaydon Eldridge knocked down four 3-pointers for 12 points, and PJ Perkins led Mexico with nine rebounds. For Fulton, Walker Gohring had 24 points and 16 rebounds, Lancaster had 20 points, five rebounds and a block, Donovan Weigel finished with 10 points, seven rebounds and five blocks, and Rowdy Gohring had 11 points and three 3-pointers.

Shelton and the Bulldogs showed no quit in the fourth quarter despite going into the fourth quarter down 44-24. After Lancaster laid in an early bucket, Shelton answered right back with a 3-pointer prior to vigorously pushing the ball in transition to attack the rim. Pappas said it was a great effort and was an example of the “senior leadership” Mexico has, but he would like to see Mexico be more balanced offensively.

“We need other guys to step up around him,” Pappas said. “We got to find that second, third and fourth scorers. I always want to try to get four guys in double figures and want to get that as much as possible. We’re a young ballclub with a lot of inexperienced varsity guys, and hopefully, we can grow and develop quicker.”

DJ Long went into Saturday averaging 23.3 points per game in three games but finished with two points against Fulton, knocking down a jumper in the third quarter. Pappas said Long just couldn’t get into a rhythm but is confident he will and the other Bulldogs will learn from it as it is just one game. Long joined Shelton on the all-tournament team along with Montgomery County’s Clayton Parker, Hermann’s Parker Anderson, and Fulton’s Walker Gohring and Lancaster, who was also the MVP.

At the Steve Leslie Invitational in Pleasant Hill, the Mexico boys finished fifth out of 16 schools with 302.5 points, behind Kirksville’s 304 points and winner Smithville’s 400.

Mexico had three runner-ups in their respective weight classes including Grant Van Horn placing second in the 138-pound weight class with four pinfalls prior to losing by a 7-3 decision in the first-place match to Kirksville’s Lane Patterson. Gavin Martin was the runner-up in the 132 class after scoring three pins, a 9-5 decision victory against Southern Boone’s Grant Leininger and losing Kirksville’s Ben Amerman by pinfall. Watson Azdell placed second in the 126 class following two pins, a 3-1 decision win over Smithville’s Trent Hallett and was pinned by Harrisonville’s Chris Sullivan.

Kayle Martin and Emille Scanavino each finished sixth in the 144- and 285-pound weight classes.

In the Marceline Tiger Mat Classic, the Centralia boys collected five first-place varsity finishes and two junior varsity winners. Brayden Dubes finished first in the 126-pound weight class and earned the Most Outstanding Male Wrestler title at the event, and Seth Hasekamp wrestled to top honors in the 285 class and clinched his 100th career win in the process. Weston Ward was first in the 120 class, Rex Bryson won the 144 class and Brayden Shelton was first in the 165 class.

Blake Bodine and Payton Mabrey each took first place for the junior varsity squad in the 106B and 285B classes, respectively.

Earning second place was Bryson Dubes at 106, Zane Dubes at 132, Jesse Shannon at 138 and Wyatt Adkisson at 150. Third-place finishers were Mason Adkisson at 175 and Ian Tuggle at 190.

North Callaway repeated as tournament champions at the Ray Stockdale Invitational in Knob Noster after finishing with 163 points to edge Knob Noster by one point and beat out 15 other teams.

The Thunderbirds were victorious in the lighter weights, earning first-place finishes from Tristan Young at 106 pounds, Lane Kimbley at 132 pounds, and Cashton Holloway at 138 pounds. Young pinned both of his opponents, Kimbley won by pinfall in all three of his matches, and Holloway pinned California’s Tristan Balsley in the fifth minute of the first-place match.

Casper Safranski and Caleb Rohrbach were the runner-up of the 190- and 215-pound weight classes, respectively. Safranski won by pin and a 3-1 decision before losing by major decision for first place, and Rohrbach pinned his first two opponents before being pinned by his final opponent.

Eli Henry and Carson Safranski were each third in the 150- and 157-pound weight classes, respectively. Henry had two pinfall victories and a 3-1 decision loss to Maysville’s Kaleb Jestes. Safranski defeated Warsaw’s Drake Murrell by a 3-2 decision but split his final two matches with pinfall results in each of them.

Rounding out the team’s medalists were John Higgins and AJ Siegel with fourth-place finishes in the 126 and 144 classes. Higgins and Siegel each went 1-2, winning by pinfall.

MMA was led by three runner-up finishes from Sam Stevens in the 126-pound weight class, Trae Griffiths in the 144 class, and Gabe Canonico in the 157 class. Stevens had two quick pinfall wins before losing quickly by pinfall, Griffiths pinned three opponents before the second minute prior to losing by an 8-5 decision to Central’s Devin Rowe in the first-place match, and Canonico’s two of three pinfall victories were in seconds before he was pinned in seconds for first place.

Bryson Powell finished third in the 150 class following three pinfall wins, a major decision in his favor and a pinfall loss.

The Mexico girls finished 1-4 on the day in the Marshfield Duals Tournament. The Lady Bulldogs lost 52-18 to Marshfield, 42-30 to Sullivan, 36-30 to West Plains, and lost by criteria to Mountain Home after tying at 30 points. Mexico won by criteria against Branson after that dual ended in a tie at 30 points.

Kaylynn Pehle lost her first match in the 115-pound weight class against Marshfield but was perfect the rest of the day, scoring three pinfall victories. Alizabeth Welch was undefeated in the 105 class, pinning two opponents during the day, and Taylor Parker won four matches and pinned two in the 190 class. In the 130 class, Abby Bowen had a 5-2 decision victory against Marshfield and pinned her Branson opponent.

At the Marceline Tiger Mat Classic, the Centralia girls had one first-place finisher in nationally ranked Ava Ward. In the 115-pound weight class, Ward won by pinfall in all four of her matches, leading her to be named the Most Outstanding Female Wrestler at the tournament.

Madie Shelton was the runner-up in the 120 class after pinning three opponents and being pinned once. Gretchen Marriott finished 3-1 on the day and a fifth-place finish in the 155 class following three pinfall victories and one pinfall loss.

Look for the full stories in the Wednesday, December 7, 2022, edition of the Mexico Ledger and on the website on the same day.