It was going to be Friday, but plans changed.

As it turned out, Friday was a travel day for the Mexico Bulldogs as they made the four-plus hour trip to Seneca for their quarterfinals … 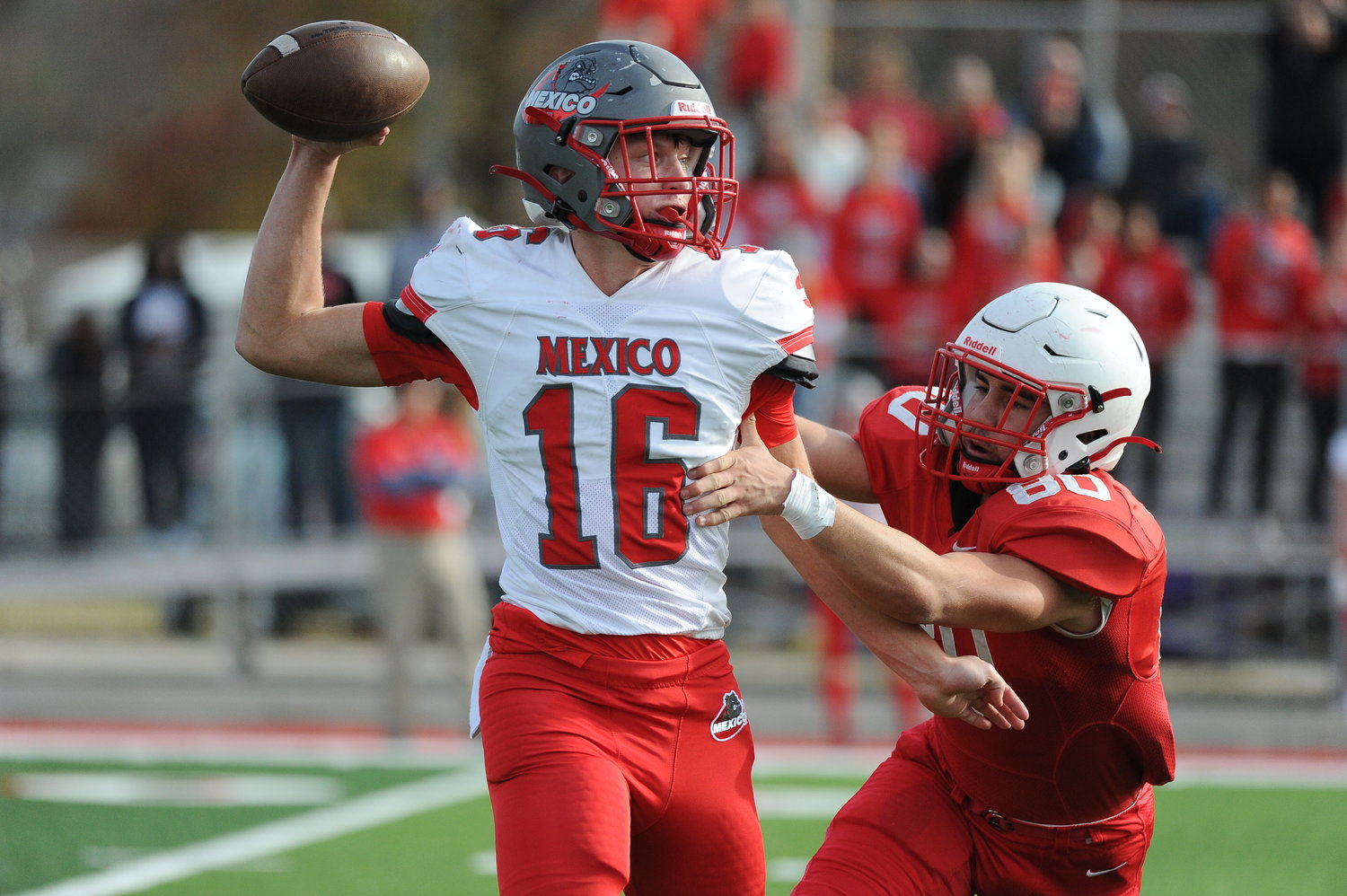 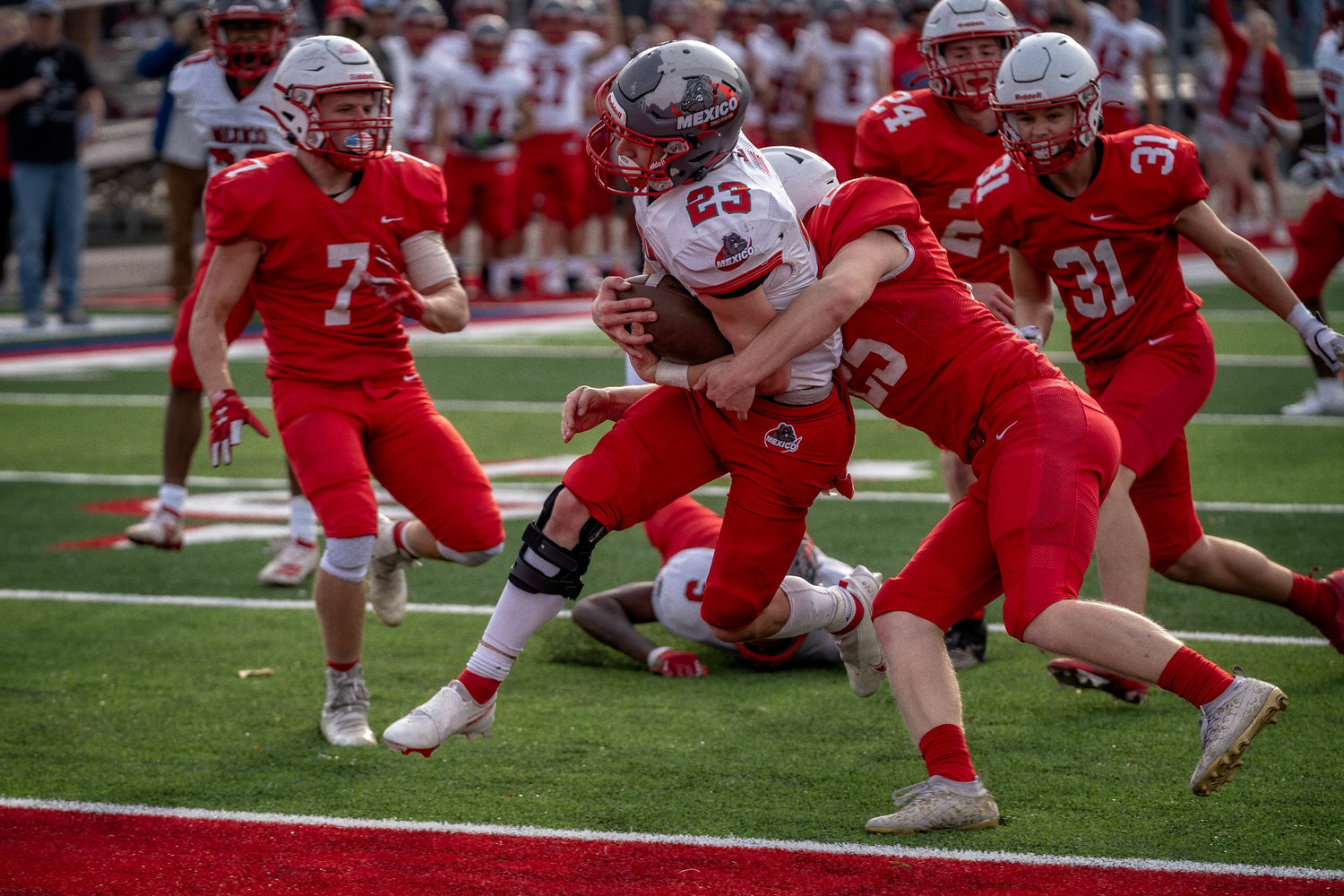 Andrew Runge (23) fighgts for the endzone in the state quarterfinal game. 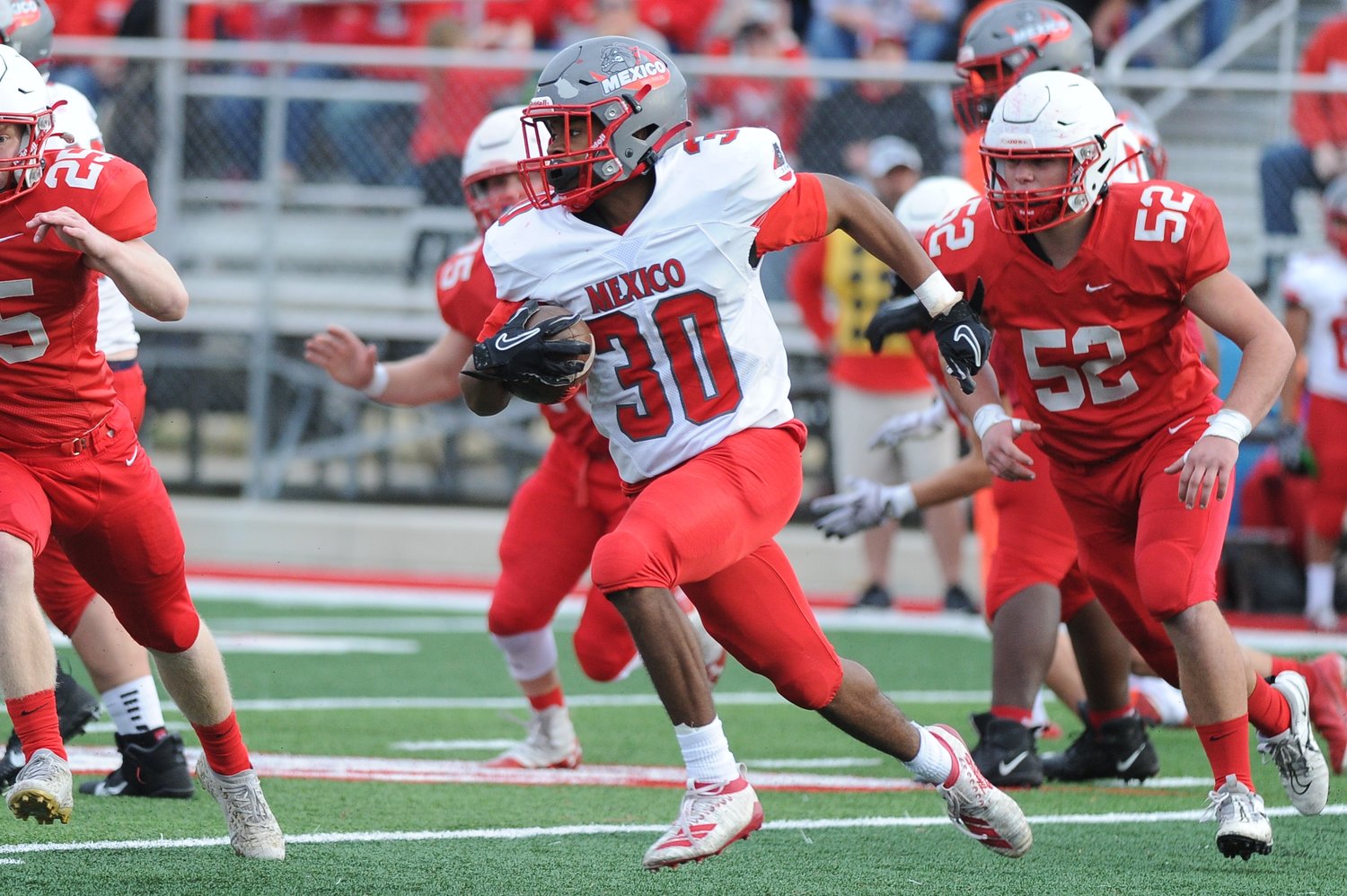 It was going to be Friday, but plans changed.

As it turned out, Friday was a travel day for the Mexico Bulldogs as they made the four-plus hour trip to Seneca for their quarterfinals matchup. Game time was moved to Saturday afternoon earlier in the week, but in the end it made little difference.

The Bulldogs collected their 10th year of 2021 and advanced to state semi-final play with a 20-7 win over their host.

Playing in the afternoon with a schedule pivot may have played on both teams a bit as they were both scoreless in the first quarter. Seneca would break the seal in the second quarter with a rushing touchdown from Jackson Marrs for the 7-0 lead. Ty Sims and company would answer with a touchdown of their own, on a Andrew Runge 13-yard run. After Runge’s extra point, the score was knotted at 7-7; that would be the score at the intermission.

That would change in the third quarter as Sims connected with Michael White for a 60-yard touchdown pass. An extra point later, and the Bulldogs were up 14-7, and as it turned out, that was all they would need.

Seneca was held scoreless in the second half by the Bulldogs’ defense and a fourth-quarter pitch from Sims to White would add some insurance and ensure the 20-7 win.

Compared to recent Bulldog games, Saturday’s was a lower-scoring affair, but coach Steve Haag liked what he saw, especially considering the dynamics of the buildup.

“I thought they managed it well,” Haag said.

And in the end, Saturday proved to be a beautiful day for football.

“It was a great atmosphere,” Haag said.

Seneca proved to be a formidable foe and Haag says his players felt they were one of the most physical teams they’d faced this season, comparing them to Hannibal.

After a staccato first half, the Bulldogs looked more comfortable in the second and the defense locked down. While 20 points is a bit less than the Bulldogs’ faithful are used to, it was no less effective.

The coach Kenny Grubb-led defense again proved disruptive, and facing a deficit in the second half, Seneca had to force their passing game, which was not their strength.

And Haag credited Seneca’s D for their play.

“They had some good schemes defensively for us,” he said.

White led the Bulldogs with 86 yards rushing on 10 carries. He added 83 yards receiving, including his 60-yard touchdown reception.

Shivers had an interception.

The Bulldogs face St. Mary’s, who defeated Park Hills Central 44-7. The game is set for 2 p.m. Saturday at St Mary’s.

“I think our kids understand how good they are,” Haag said. “We’ve got to play a good game. You make a mistake, they can make you pay. You can’t have mistakes.”