Lady Panthers correct past mistakes in 64-35 win vs Marceline

The Centralia girls have only lost three games so far this season but want to be even better by the end of it. 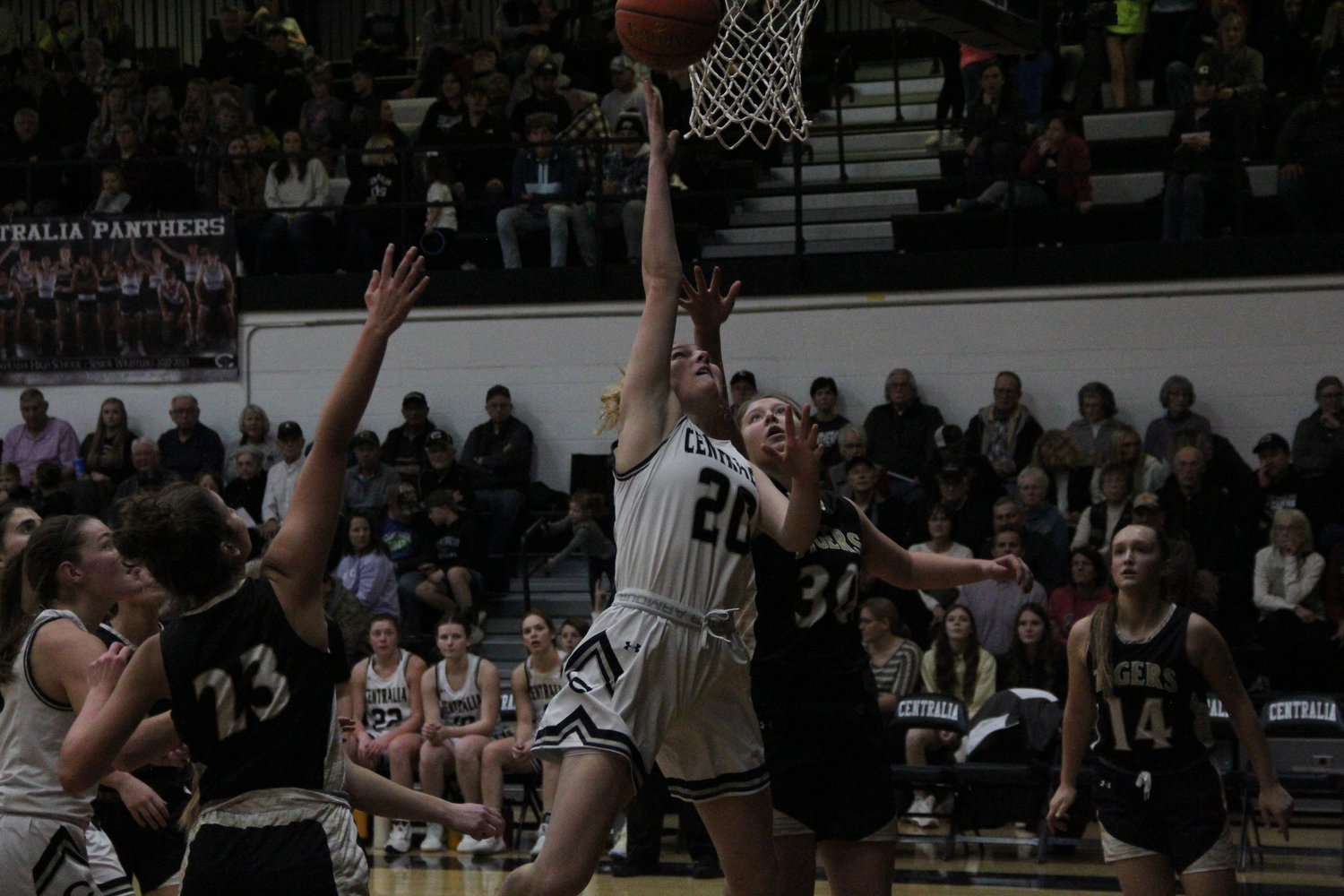 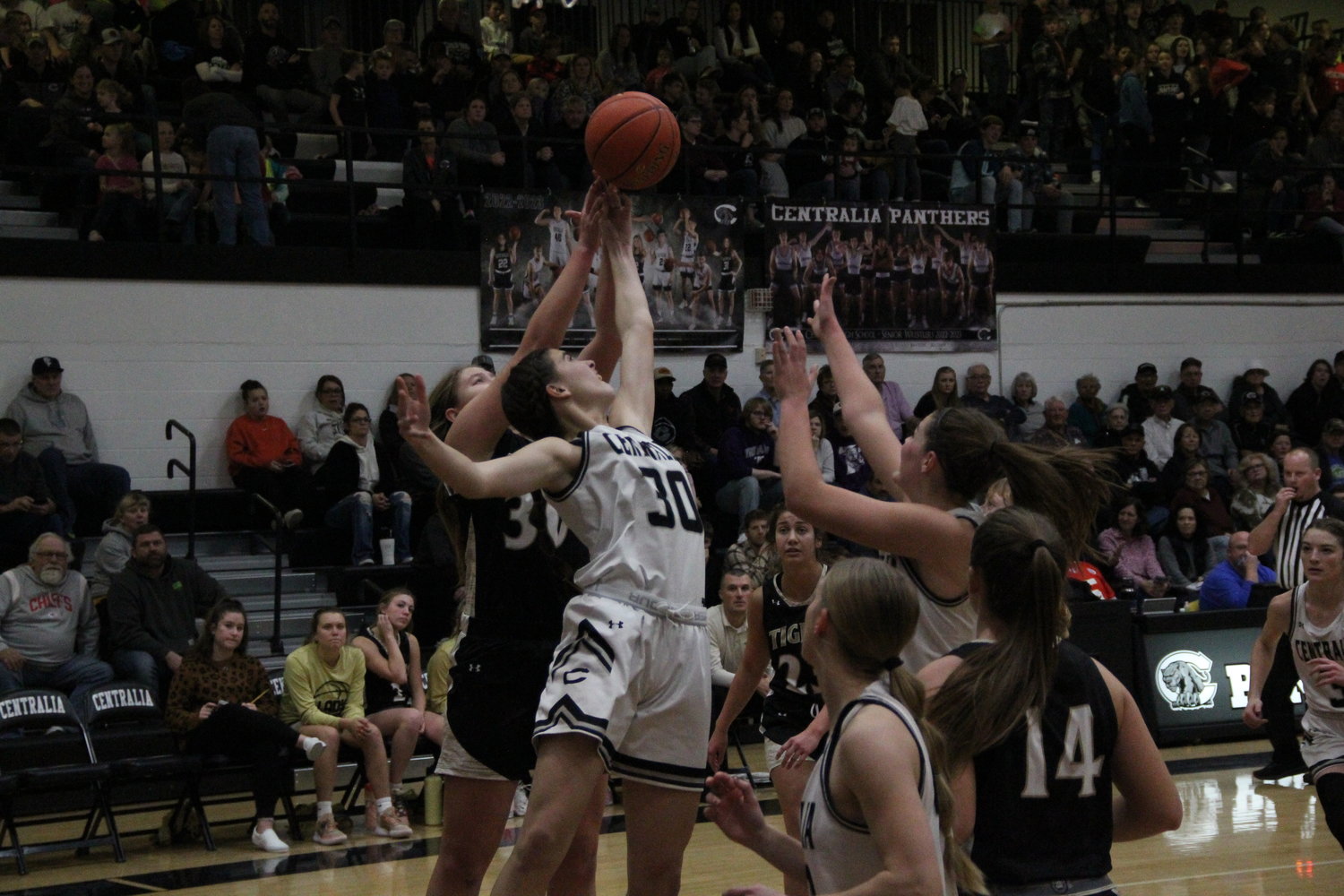 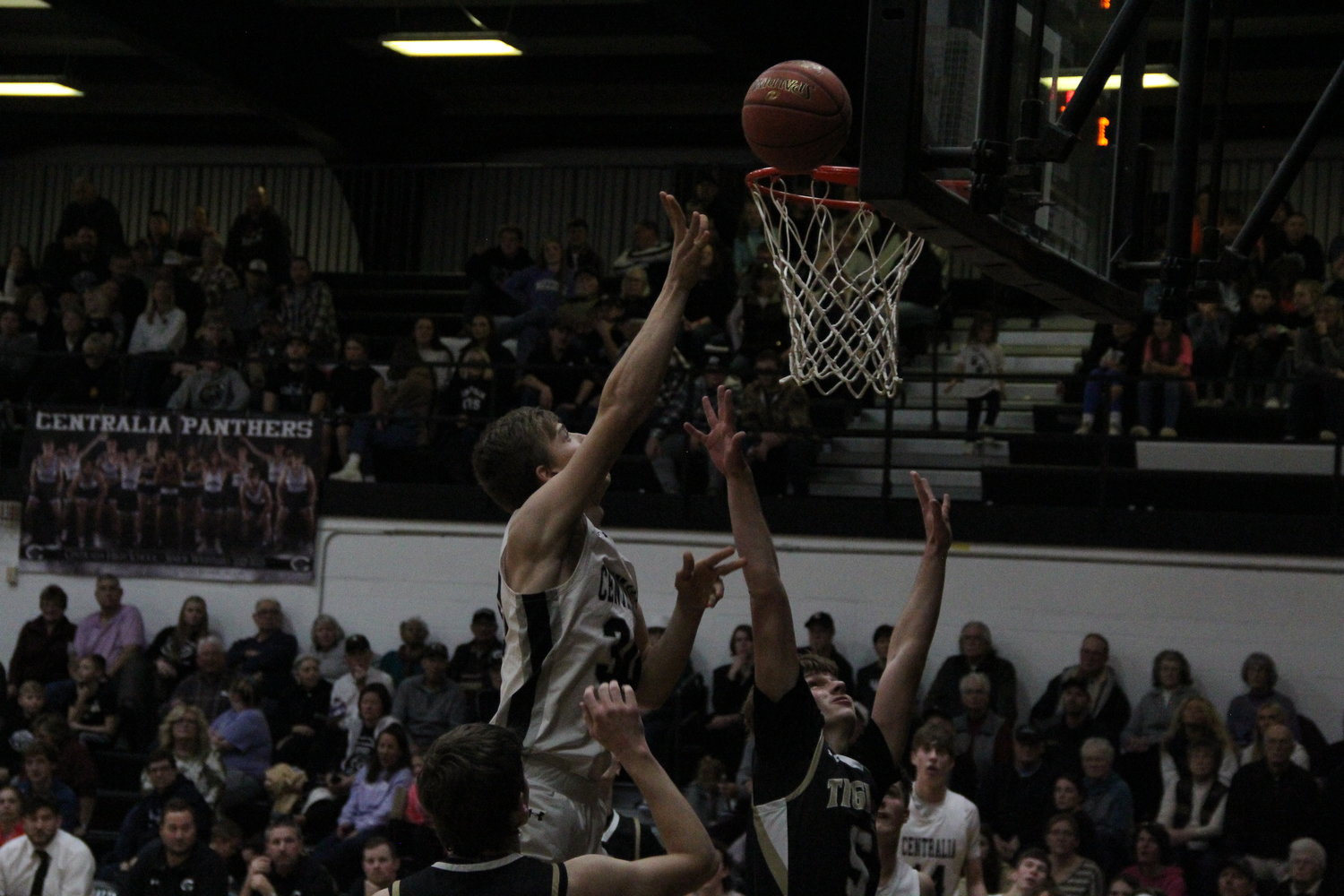 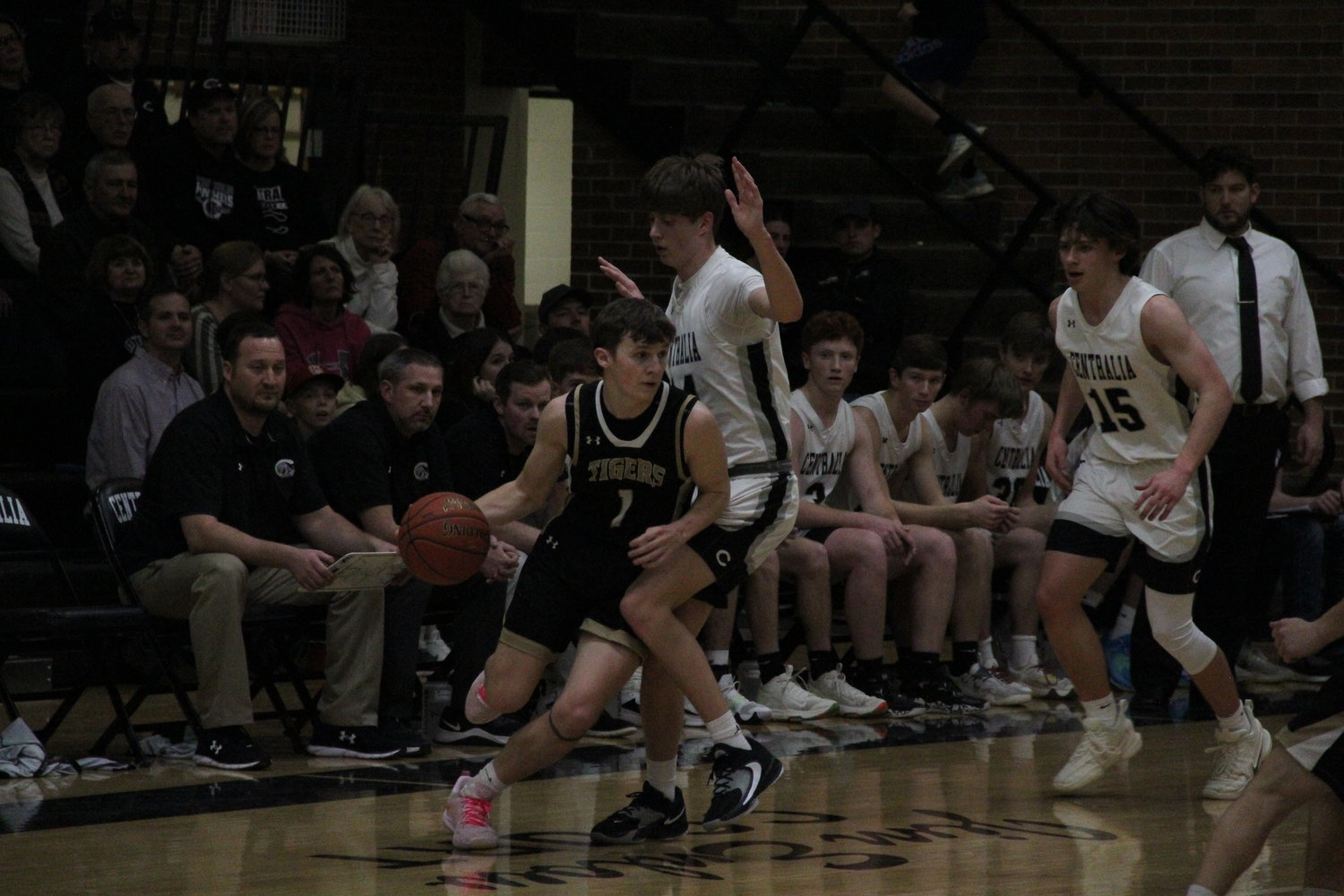 Lady Panthers correct past mistakes in 64-35 win vs Marceline

The Centralia girls have only lost three games so far this season but want to be even better by the end of it.

The Lady Panthers improved in some areas from recent games in a 64-35 victoryFriday at home against Marceline during the school’s Winterwarming festivities.

Braylin Brunkhorst led Centralia (13-3) with 16 points off the bench along with five rebounds, Shelby Lewis followed with 12 points and seven rebounds, Morgan Ross had eight points, and Annie Robinson finished with seven points and six rebounds.

Head coach Megan Brinkmann said Centralia, in particular, improved on their transition and rebounding. She said the fastbreak offense wasn’t where she wanted it after Tuesday’s 52-34 win against Boonville and they were outrebounded thoroughly in the previous Friday’s 68-43 loss at Clarence Cannon Conference foe Palmyra.

“Just getting the ball out, running extremely hard, someone running to the rim and that led to some easy points,” Brinkmann said. “We had 17 offensive rebounds. We had more offensive than defensive, which we had the last two games. Shelby had five offensive rebounds, Annie had five, Harper (Sontheimer) had three so giving us extra possessions. We got outrebounded so bad last Friday, I think we took that pretty hard and we talked about being prideful and just not happening again. I think they’ve taken that to heart.”

Brinkmann said it was nice to get off to a 22-6 lead after the first quarter, feeding off the energy of the crowd on a special night. An Ireland Bloss 3-pointer gave Marceline (10-7) its first points after Centralia already had 10 points and built its massive first-quarter lead thanks partly to Brunkhorst turning four defensive rebounds into either points for her or a teammate on the other end.

“They ran a kind of different 2-3 zone, just a little different matchup, and we talked about it,” Brinkmann said. “We got the ball to the high post and we found ways to score. We found shooters, and we finished so it was really good to see.”

Natalee Pennington led Marceline with 13 points and four 3-pointers and led the Lady Tigers 3-pointer-heavy offense in the first half. Their post player Addison Huber followed with 11 points, scoring 10 of those points in the second half.

Brinkmann said Centralia was aggressive on defense whenever Marceline went inside until the Lady Tigers made adjustments in the second half to give Huber more touches and points in the paint. Still, the Lady Panthers held firm with a 33-12 halftime lead, 54-25 lead after the third quarter and matching Marceline’s 10 points in the fourth quarter.

“The shots they hit, I thought we actually contested and did a decent job. They’re just able to hit those types of shots,” Brinkmann said. “Annie, I told her she was doing a great job. We made an adjustment to front. Once we made that, I think it slowed (Huber) down a little.”

Centralia faces Fulton (3-9) as the No. 1 seed in the Harrisburg tournament at 6 p.m. Monday in Harrisburg’s high school gym.

The Centralia boys had a special group out on the floor to start a special game on Friday.

The Panthers began its Winterwarming game at home against Marceline with an all-senior starting five — Austin Orth, Jack Romine, Benji Chick, Mason Presley and Tanner Dutton. They jumped out to a 19-4 lead after the first quarter prior to winning 68-37.

Logan Rosenfelder led the Panthers (8-7) with 18 points, six steals, four rebounds and three 3-pointers and helped keep Marceline (1-15) at bay in the second half with 11 points in the third quarter. Orth followed with 12 points, Boen Zimmerman had 12 points and seven rebounds, Chick knocked down three 3-pointers and Dutton added two blocks later in the game.

Head coach Scott Humphrey said he felt like the seniors deserved the start and rewarded the team with their nice play.

“They earned the right to start so we thought this would be a good game for Courtwarming for them to start,” Humphrey said. “They came out and got us out to a good start.”

Orth became a dependable presence in the paint in the second half after Marceline cut into Centralia’s lead a bit with a 9-3 run to close out the second quarter. Chick’s shooting along with Rosenfelder helped the Panthers’ slimmer 32-18 halftime lead turn into a bigger 57-30 lead after the third quarter.

“We didn’t finish very strong that first half,” Humphrey said. “We came out in that third quarter, and Logan started knocking down some shots and we got going.

“I was pleased that (the seniors) played so well,” Humphrey said. “Austin finished well around the basket, and Benji hit some good shots. They come to practice every day, and they work their tails off. I gave them that opportunity, and they made the most of it.”

Humphrey said Centralia did hit a “lull” in the second quarter as Marceline’s shots started going down. Cayden Davis and Barrett Stearns each hit 3-pointers prior to finishing with 14 points and seven points, respectively. Davis finished with four 3-pointers.

Prior to that, Centralia’s defense was really pressuring Marceline until the Tigers were forced into turnovers and kept that intensity throughout the night as several Panthers finished with multiple steals, including Winterwarming king Jack Romine coming away with three steals.

“We just pressure them and did good things,” Humphrey said. We turned them over even though it is quite a different (offensive) style than we’re used to. Our guys rose to the challenge and accepted that tonight.”

Centralia is the No. 5 seed that will face No. 4 Harrisburg (11-4) in the Harrisburg tournament at 7:30 p.m. Tuesday at Harrisburg’s middle school gym.