Centralia has been competitive the previous seven games but made a few too many mistakes Thursday night.

The Lady Panthers went into their home game against Class 3 No. 2 Fatima winners of five of … 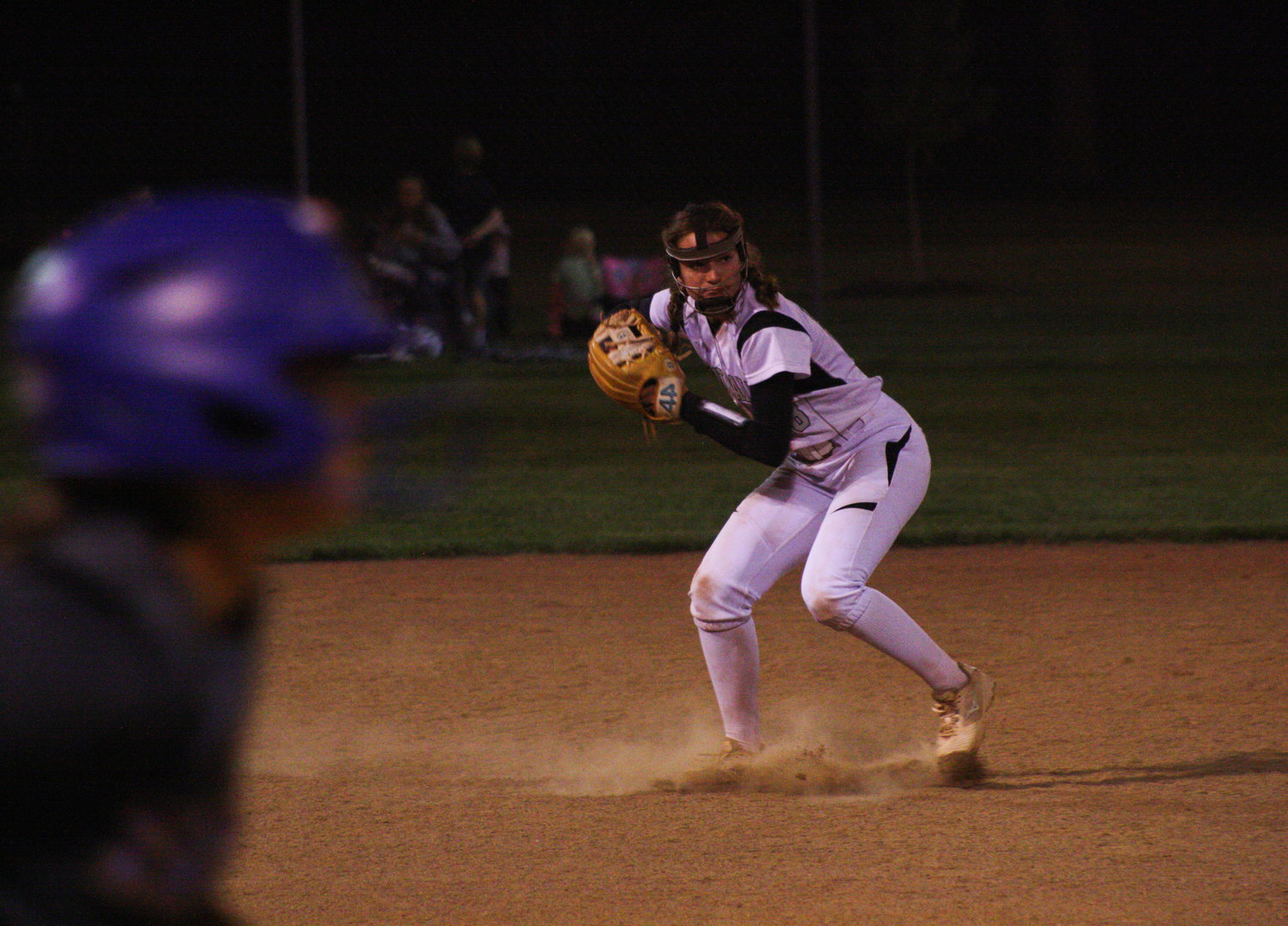 Centralia senior shortstop Jozelynn Bostick fields a ground ball to throw out a Fatima runner going down the line Thursday in Centralia. The Lady Panthers lost 8-2 to the No. 2 team in Class 3.
Jeremy Jacob Photo
Posted Saturday, September 24, 2022 3:49 am
By Jeremy Jacob, Sports Editor

Centralia has been competitive the previous seven games but made a few too many mistakes Thursday night.

The Lady Panthers went into their home game against Class 3 No. 2 Fatima winners of five of their previous six but allowed three home runs in an 8-2 loss to the Lady Comets. Centralia didn’t record a hit against Mia Kliethermes until the sixth inning, when Meredith Wright gave the team its only runs on a single.

Head coach Elizabeth Bostick said it took some time for her team to adjust to Kliethermes, who allowed three hits and struck out five through six innings. She also induced nine groundouts, with six of them occurring in the first two innings.

“She has good spin. She has a good change of speed,” Bostick said. “Her changeup was good. Really, we put the ball in play well. I was very proud of my team for what we did as far as putting the ball in play and putting some pressure on that defense. We just hit it right at them.”

Bostick said Kliethermes locating the ball low and inside contributed to Centralia’s early difficulties, but when Centralia had the timing down, Autumn Hawkins pushed a bunt for an infield hit, Jozelynn Bostick grounded a ball past the defense and Wright lifted a pitch to the outfield.

For high school hitters, it might take longer for the girls to do some damage against a pitcher, Bostick said.

“They did what they needed to do at the time,” Bostick said. “We just needed to do it earlier. When you get to college, the first three batters, you better already adjust. In high school, sometimes it takes them an at-bat, sometimes two to adjust to that.”

Fatima (17-2) showed its power early as Faith Jaegers took Kaelyn Walters deep the opposite way for a two-RBI home run in the first inning. She had fouled off several pitches prior to the one that went over the fence. Jaegers drove in her third run in a three-run fifth inning for Fatima.

The lead grew to 7-0 after Hannah Heisler was early on two foul balls before driving an 0-2 pitch out against Makenzi Adkisson. Allison Schwartze tacked on a solo shot in the seventh inning.

“They’re just big, strong girls, and they’re good hitters so we have to mix it around,” Bostick said. “The home runs are misses. Those are missed pitches, and your pitchers aren’t going to throw where you’re asking them to throw 100 percent. If you’re going to miss, they’re going to take advantage of that, and that’s what they did.”

Bostick said Walters, in three innings of two-hit ball, and Adkisson, in four innings with three strikeouts, were keeping the ball down and mixing it up much of the time. These executed pitches led to easy outs that were handled by the defense, which has been a key part of Centralia’s success recently, Bostick said.

The Lady Panthers have knocked off three state-ranked teams — Highland, Troy-Buchanan and Monroe City — in that stretch of seven games. Bostick said they have adopted a “never say die” attitude and even mounted a bases-loaded threat in the seventh inning Thursday night.

“I can’t say enough about my defense,” Bostick said. “My defense did phenomenal tonight. Defensively, we’re spot on where we need to be.

“We’re putting the ball in play. At this point in the season, that’s where we need to be. Yeah, we’d like to have a few more base hits. Yeah, we’d like to be moving runners a little bit more. But against the pitching staff like what they’ve got, it’s good that we’re at least coming out and competing.”

As a team, Centralia finished fifth with a score of 418.

Centralia plays in a quad meet at Macon on Tuesday.