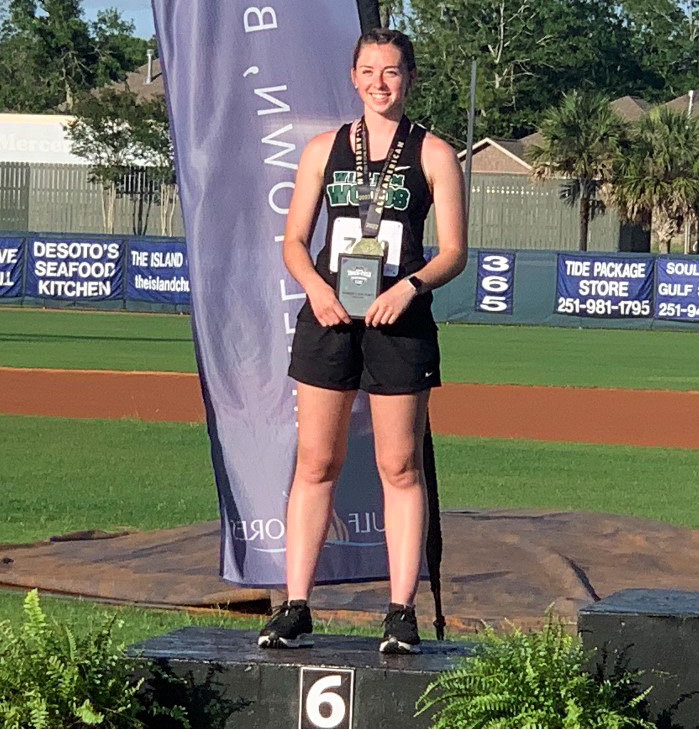 William Woods athlete and Community R-6 alum Natalie Thomas stands on the podium May 26 at the NAIA national championship meet in Gulf Shores, Alabama, after earning All-American honors in the javelin. Thomas is the first William Woods woman to be an All-American in the event.
Submitted photo
Posted Wednesday, June 15, 2022 11:41 am
By Jeremy Jacob, Sports Editor

It sounds like an obvious improvement to become physically stronger in an event like the javelin, but Thomas also became mentally stronger heading into her second straight NAIA national championship appearance. The Mexico native was able to turn a 16th-place finish a year ago during her freshman year into a sixth-place finish to place in the top eight and earn her All-American honors.

Thomas made history in a number of ways on her final throw of 42.85 meters in that she set the school record after already setting a personal-best twice earlier in the event to make it to finals and becoming the first William Woods woman to be an All-American in the javelin. In the school’s history, there has been only one other javelin thrower to be an All-American and that was dual-sport athlete Darrien Dickey (basketball and track) in 2018.

“I left there last year not happy with the way I performed so I put in the work this year and to see that all come together and pay off was really nice,” Thomas said. “I didn’t know that going in that there had never been women be an All-American in the javelin so that was really neat to be that first person to do that.”

Getting on the podium did take some work as Thomas recalls lifting a lot more as she wasn’t satisfied with her throwing mechanics.

“In my throw, how I’d strike my arm and how my left arm would come through, it all just needed to be quicker and harder and faster,” Thomas said. “Being in the weight room really helped improve that.”

Thomas improved her movement, but she said she had a number of thoughts moving through her mind during nationals, especially as she surged further and further into distances she hadn’t hit before. Before each of her nationals appearances, Thomas hit the NAIA “B” standard (39 meters) to qualify for the meet, Thomas said she wanted more.

The “A” standard of 40.5 meters that she tried to eclipse was just out of reach prior to her day at nationals on May 26 in Gulf Shores, Alabama. Thomas hit 41.64 meters on her first throw before bettering that new personal-best on her fourth throw of 41.70 meters. Now she wanted to be an All-American after missing that mark prior to this year and earned it on her fifth throw.

“When I went into finals, I just carried that momentum,” Thomas said. “I can’t stop here because I only threw 41 meters. To secure that All-American spot, I had to throw at least a 42. I had a friend that joked with me about, ‘You have to hit 42. You have to hit 42.’ I was like, Well, now I have to hit 42.’ Those were the kind of things that were going through my mind.”

Thomas’ best throw during the 2021 competition was 35.99 meters, and she admits she was “in my head” and nerves got the best of her, which she said led to her throwing “the worst I had thrown all year.”

She said she had these nerves back in high school as she finished third in 2018 during her sophomore year to earn all-state honors and setting the current school record of 35.41 meters after picking up the javelin for the first time that season. Thomas recalls being more nervous during her junior campaign as she felt her expectations were higher, culminating in her missing the podium at state that year. When she arrived at college, her strength and conditioning coach Bob Jones told her she was a “mental case,” which bothered her until she realized he had a point.

“I had to relax myself and remind myself, ‘You’re not going to throw what you want if you can’t relax,’” Thomas said. “That was a big thing was relaxing for me, and I did that to myself during basketball too, just getting so worked up and putting so much expectations on myself instead of just having confidence in myself that I can do it and just going out there and throwing it.”

Thomas said that staying relaxed and focused for her includes not being as social as she typically is when she’s not competing. Getting in that mode became more important to having success at the college level, she said.

William Woods head track and field coach Dan Schwab said he knew Thomas had the makings to be a good javelin thrower and the capability of accomplishing great things when she qualified for nationals as a freshman. He said Thomas is a “competitive” and “self-disciplined” person, which helps athletes in her event during the course of the season.

“Someone that knows it’s going to be a long road (can be good at the javelin),” Schwab said. “Obviously a fast-arm strike, someone who has fast-twitch muscles, it’s a lot of what you look for in any sport or any event. Someone who is strong, someone who is fast, someone who is very coachable and willing to work through the ups and downs.

“Meet to meet, it’s so black-and-white for track and field. ‘Oh, I didn’t throw farther this week.’ You can’t think, ‘Well, I didn’t get better.’ It’s an off-day or it’s an OK day. She took it a lot better this year than she did last year – not getting too high and not getting too low.”

Thomas said being a dual-sport athlete can adversely affect the track and field season as the two-time basketball all-state Lady Trojan and an all-conference player at William Woods admits she needs a break for her body and mind to recover after basketball season. Schwab agrees that can be difficult but believes not starting work in September with the other track athletes prevents Thomas from being “high-strung” about the upcoming season and helps her have the right mental state when she does start preparing for track.

Schwab said Thomas understands “there is no perfect day in track,” meaning she, like every other track athlete, wants to do better every attempt in every meet. He said she has a lot of “natural athleticism” and “natural ability” but listening to instruction and taking the initiative to train and get better is valuable to his team.

Thomas said she was told she had the natural frame to be a javelin thrower after speaking with then-Community R-6 head track and field coach and assistant basketball coach Stacie Carroz. Softball and basketball were already on Thomas’ schedule as she was encouraged by her father to play multiple sports so she was better prepared physically to excel in basketball, but she skipped track her freshman year.

“I don’t like to run,” Thomas said. “I run with a basketball in my hands, but that is it. (Carroz said) ‘Hey Natalie, there is this new thing I want you to try. I want you to try and throw javelin. One of my friends at Montgomery, he coaches it and he says taller, lankier girls tend to throw this.’”

Thomas remembers watching video and consulting other people to teach herself how to throw the javelin. She gradually realized she could throw the javelin and is amazed how far she has come since then.

“Looking back at pictures and videos of me throwing it in high school, I’m just like, ‘Wow, I’ve really come a long way since then’ so that is really exciting to see,” Thomas said.

As far as how much further she can progress, Schwab thinks Thomas can get even better as she has during her first two seasons. He said she has already made a lasting effect on the program, not just because of the accolades, but also how she has been a good example, especially for William Woods’ other women javelin throwers.

“It sets the tone for kids that are here and gives them something to work towards,” Schwab said. “We had three women’s javelin throwers score at our AMC (American Midwest Conference) conference championship. She won the conference championship so for those other two girls look towards that and try to become all-conference in the top three, battle with her for conference champ or maybe one day qualify for nationals. I can’t say enough positive things about her.”

Thomas said she hit her goals this season and is now aiming higher with two more years left in her career. To accomplish this, she acknowledged she can’t let loose of the mental strength that has lifted her in the standings.

“I think chasing that (All-American) goal and making that my goal and my priority each year so I train the hardest that I can and not going through the motions (will be important),” Thomas said. “With throwing, some days you just have it and some days you don’t. I’m not naïve to the fact to think that, ‘Yeah I could be sitting No. 1 next year, but it might not happen.’

“It doesn’t mean you’re failing, it just means that it’s not your day. You have to be mentally tough enough to get yourself through this competition and talk yourself through it and calm yourself and whatever else.”