The Community R-6 girls and boys each have a few days before the regular season starts but have some game experience under the belts.

The boys and girls each host Wellsville-Middletown on Tuesday, … 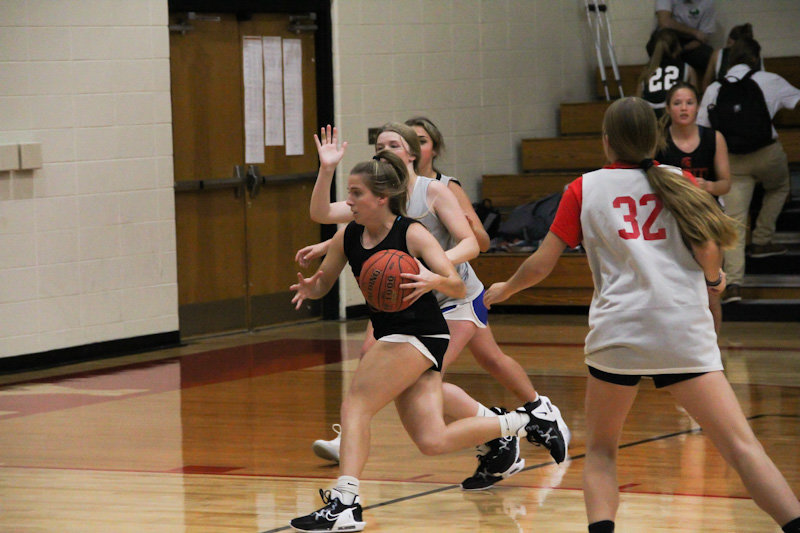 Community R-6 senior point guard Sarah Angel drives through the lane during a practice at Community R-6 High School in Laddonia. The Lady Trojans won both games of their home jamboree on Wednesday and will begin the season at home Tuesday night against Wellsville-Middletown. The boys also won both of their games during the jamboree and host the reigning Class 1 fourth-place (now Class 2) Wellsville-Middletown Tigers after the girls varsity game.
Jeremy Jacob Photo
Posted Saturday, November 19, 2022 1:13 am
By Jeremy Jacob, Sports Editor

The Community R-6 girls and boys each have a few days before the regular season starts but have some game experience under the belts.

The boys and girls each host Wellsville-Middletown on Tuesday, with the Lady Trojans playing first at 6 p.m. Both squads, however, were able to play other teams Wednesday night in their home jamboree, with the girls defeating Wright City 28-12 and then knocking off Silex 28-21 and the boys beating Wright City 29-27 and Silex 23-19.

The Lady Trojans outscored Wright City 20-9 after two quarters, and after being tied at 18 through two quarters against Silex, the girls scored 10 in the final quarter to earn the victory against a team they host on Dec. 5.