Nikos Connaway and the Van-Far boys struck twice on Monday in their season opener at home against Cairo. 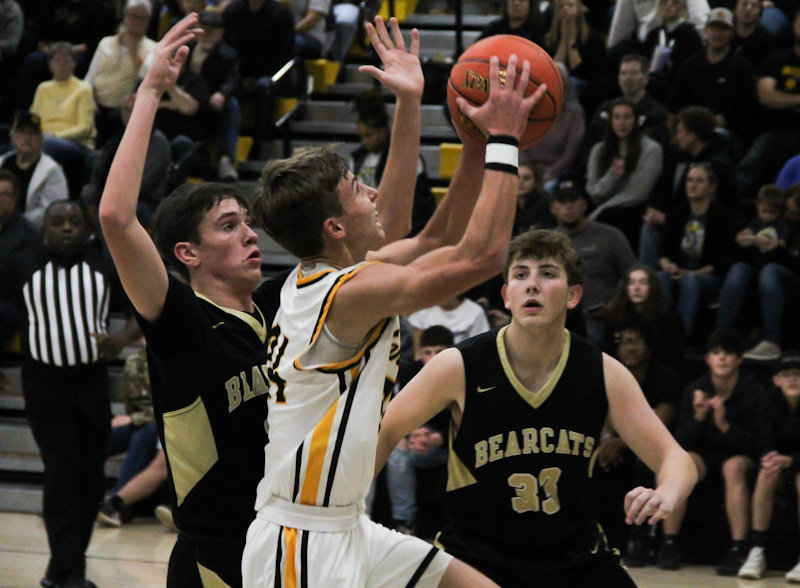 Nikos Connaway and the Van-Far boys struck twice on Monday in their season opener at home against Cairo.

Connaway nailed two buzzer beaters to end the second and third quarters as part of his standout 26-point performance that led the Indians to a 55-44 victory against the Bearcats — their second straight against Cairo (0-1) after eliminating the Bearcats in the district semifinals last year 58-55. The junior also finished with eight rebounds, six steals and five assists, Carter Jennings had a game-high 13 rebounds along with eight points and freshman Pacey Reading scored 10 points in his first career varsity game.

Van-Far (1-0) outscored Cairo 23-16 in the second half after playing even in a first half that saw the Indians lead 32-28 at the end of it. Cairo’s Logan Head led the Bearcats with 25 points but was limited to 10 points in the second half.

Head coach Pat Connaway said he knew Cairo would play hungry after the district result last year and thought his kids played that way too since Cairo is in Van-Far’s district once again this year. Head’s play demonstrated Cairo’s drive early as he scored every point in an 8-0 run to give the Bearcats a 14-6 lead in the first quarter. That wore thin for Pat Connaway and the Indians early so they wore Cairo down whenever they had a chance to run.

“I think the biggest factor was I saw them getting worn down a little bit,” Connaway said. “Our style kind of wore them down. I thought in the second quarter, about midway, we started to make a little run. I could tell their legs were getting tired, they were rushing shots and started making some bad passes.”

Connaway said he gave his son the assignment of containing Head in the second half not long after Nikos made his presence felt on the offensive end. The Indians’ leading scorer from a year ago made two slick passes to Gage Gibson for a 3-pointer and Brayden Lay for a 3-point play layup on the fast break, bringing Van-Far to within two points after the first quarter.

The second quarter is where Connaway scored the bulk of his points, finishing with 10 in the quarter and taking away five steals by the end of the first half. He found Reading in the lane for another Van-Far 3-point play and then handled the ball until the final second to stun the Bearcats heading into halftime.

“He prides himself on those buzzer beaters,” Connaway said laughing. “We’re in the gym shooting and he likes to shoot half-courters and stuff. The third quarter one was really big. Going into half was nice. We didn’t really execute because, with the crowd noise, they didn’t realize what set we wanted so they switched to man, but Nikos was able to get a 3. That’s what he does.”

Pat Connaway went on to say how Nikos has a “nice package” around him, singing the praises of Reading having a solid varsity debut and saying Jennings’ Monday night was only a teaser for the season he could have.

Nikos Connaway locked down on Head and Cairo only scored six points during the third quarter. Jennings scored his first two field goals after putting back some rebounds, which he started gathering in bunches from that point on.

Jennings had four boards entering the third quarter but matched that total in a few minutes. Van-Far opened a 38-32 lead with about three minutes left and then owned a 43-34 advantage at the end of the third after Connaway banked in his second buzzer beater.

“Carter Jennings played by far the best game that he’s had,” Connaway said. “He missed a lot of bunnies inside, but he’s going to be good. I really think Carter is going to be a double-double guy this year. He’s so much more aggressive and he can shoot the ball, so yeah, he’s going to have a nice year. People aren’t going to expect it because he was just a role player last year. The more he commands the ball inside, the more we’re going to be able to spread the floor and attack.”

Van-Far continued crashing the offensive glass as Reading grabbed a rebound, missed and then Gibson swooped in to put it back for the 45-34 lead not even a minute into the fourth quarter, giving the Indians their biggest lead of the game and forcing a Cairo timeout. Four timeouts were called in the quarter, but Cairo couldn’t draw any closer as Jennings snatched three rebounds quickly and then took three points from behind the 3-point line for a 48-38 lead with about three minutes left.

The victory gave Van-Far an early win against a district opponent and potentially a deciding factor when the seeding for districts is determined at the end of the season.

“When February rolls around, you definitely want to get a leg up where you’re that higher seed,” Connaway said. “We were preaching that to the kids.”

Cairo forced Van-Far’s hand, and the Lady Indians couldn’t force the ball in the basket.

Van-Far couldn’t handle Cairo’s aggressive defense as five Lady Bearcats finished with multiple steals to give Van-Far a 63-28 season-opening loss to its district foe Friday in Vandalia. The Lady Indians’ offense was shut down for more than 13 minutes in the second and third quarters, unable to convert on a field goal until Madelynn Caldwell hit a 3-pointer around the 2:30 mark in the third quarter.

By that point, Van-Far (0-1) trailed 53-19 and was only able to have one score in double figures. Mara Jensen, who was last year’s leading scorer, finished with 13 points, six rebounds and three steals, and Caldwell followed with seven points, knocking down two 3-pointers.

The Lady Indians were hanging with Cairo (1-0) late in the first quarter, only trailing 8-5, but head coach Heather Minter said the Lady Bearcats showed why they are reigning district champions, using a “scrappy” defense primarily to widen their margin.

“They’re just scrappy. They get after it,” Minter said. “We’re not strong in the guard area so that showed. There were times I had to move Mara out and take her away from her main post.”

Cairo showed some scrappiness on the boards early as the Lady Bearcats were snagging several offensive putbacks to overtake Van-Far in the first quarter.

That trend continued as Cairo had a 13-6 lead after the first quarter, being led by Avery Brumley on the glass in a game she was also diving all over the place, tallying three steals in the process.

Van-Far had turned the ball over on 10 of 11 possessions at one point in the second quarter, falling behind 20-8 after Olivia Cross converted on a fast break layup after she stole the ball. Brumley punctuated the first half with a 3-pointer to beat the buzzer and give Cairo a 34-9 lead.

The lanky Macie Harman also played a factor, finishing with 13 points, seven rebounds and four blocks. She was the one who guarded Jensen, whenever the Lady Indian leader was in the post, obstructing her view whenever she attacked the rim. Jensen displayed some nice footwork in the post early with two baskets in the first quarter but didn’t score a field goal in the final three quarters, relying on free throws for her points.

“It’s harder for us to score because she is the person who we want with the ball and who we want to score,” Minter said.

After Van-Far called a timeout following Cairo increasing the lead to 42-13 with three minutes left in the third quarter, the crowd came alive after Caldwell drained a 3-pointer and then McKenna Engh-Hoffman barreled inside for a layup, but Cairo’s lead was still sizable heading in the fourth quarter.

Minter said the score didn’t show how well Van-Far competed as the Lady Indians were finally generating some offense in the second half. In the fourth quarter, Caldwell hit her second 3-pointer and then Carmen Wilburn pulled up from behind the arc and converted on her first field goal. Oftentimes, the talent of a team like Cairo is overwhelming, but Minter said but Van-Far didn’t roll over when the game became more out of hand.

“We went into the locker room and just talked (at halftime),” Minter said. “I felt in the second quarter, we were getting some looks, but we weren’t following through. We were missing back side, and kids, when you’re down big, you’re rushing, rushing, rushing. I told them, ‘Don’t go out and look at the score. Just go out and do the little things we need to get better.’ I felt like they did that.”

Van-Far plays its first road game of the season at 6 p.m. Tuesday at South Callaway.