Mexico defeated Boonville at home 66-40, outscoring the Pirates 39-19 in the second half, but not before there was some … 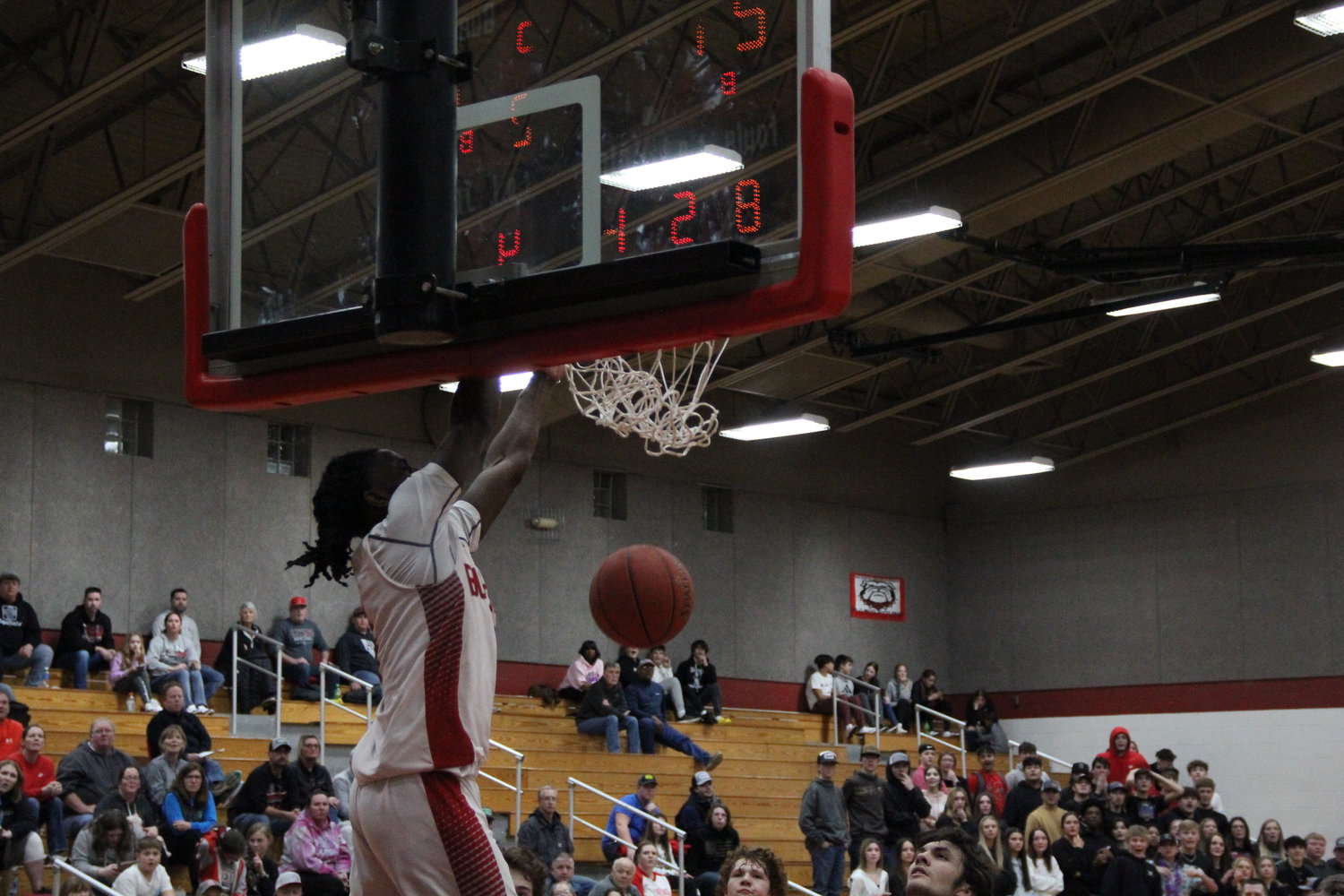 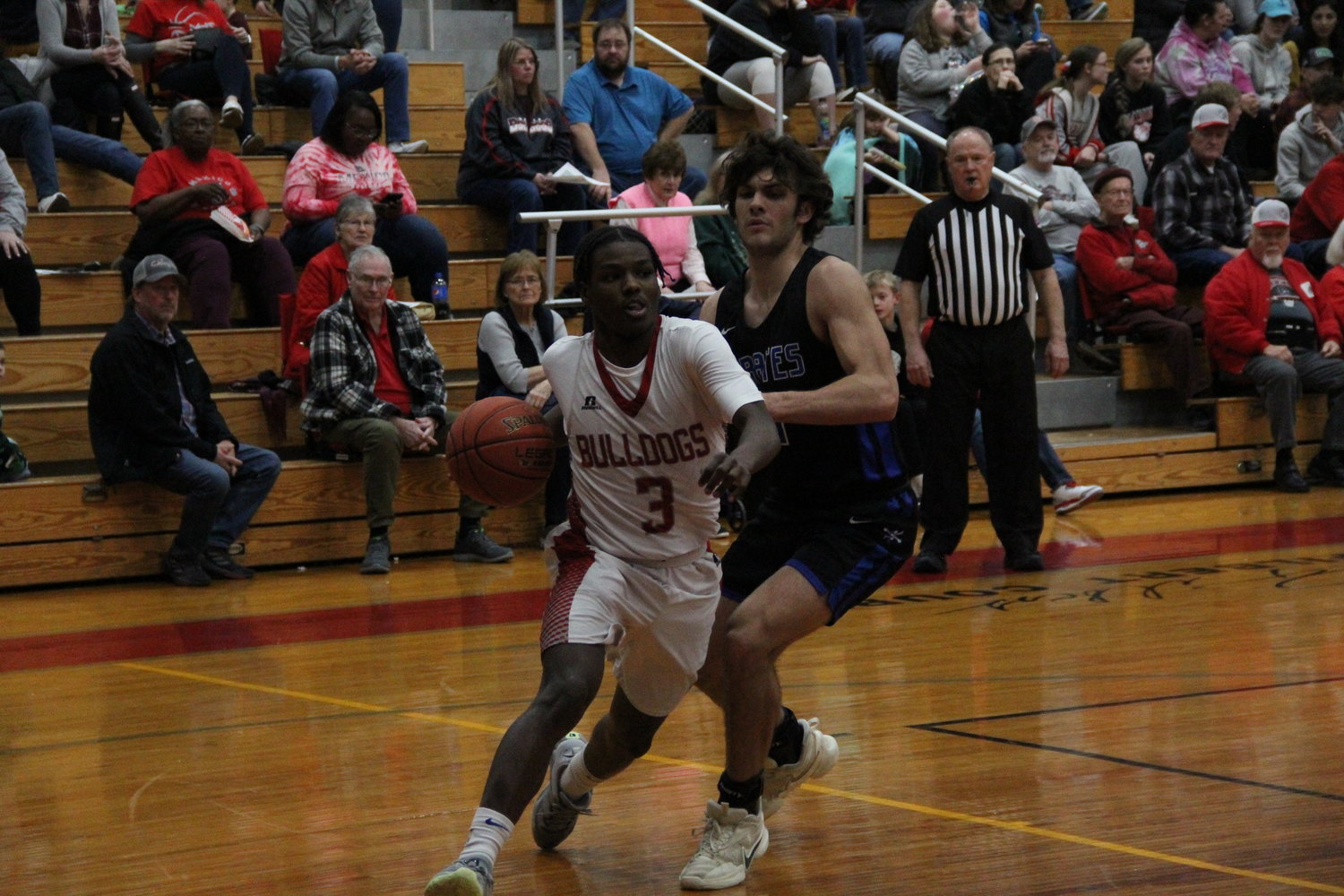 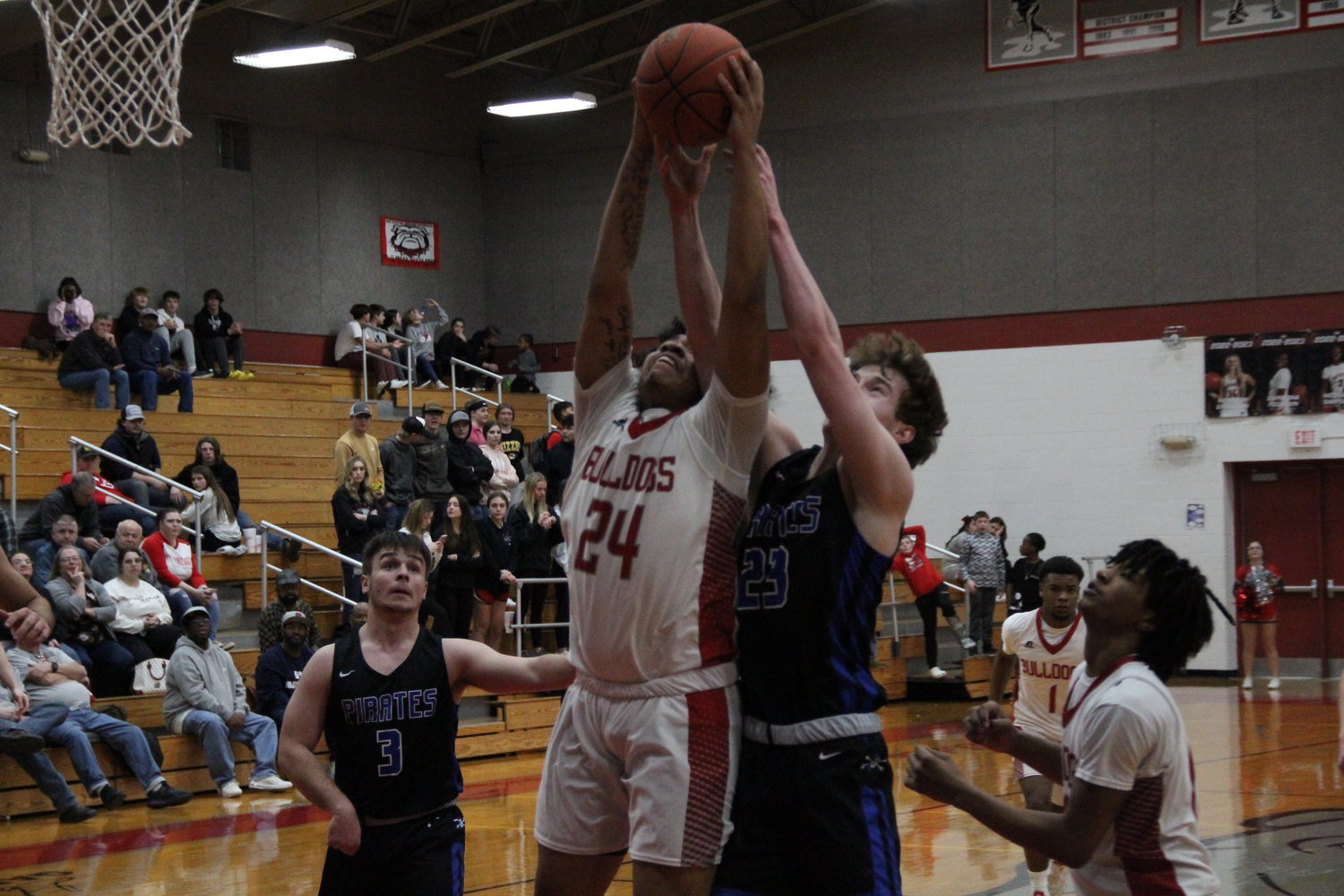 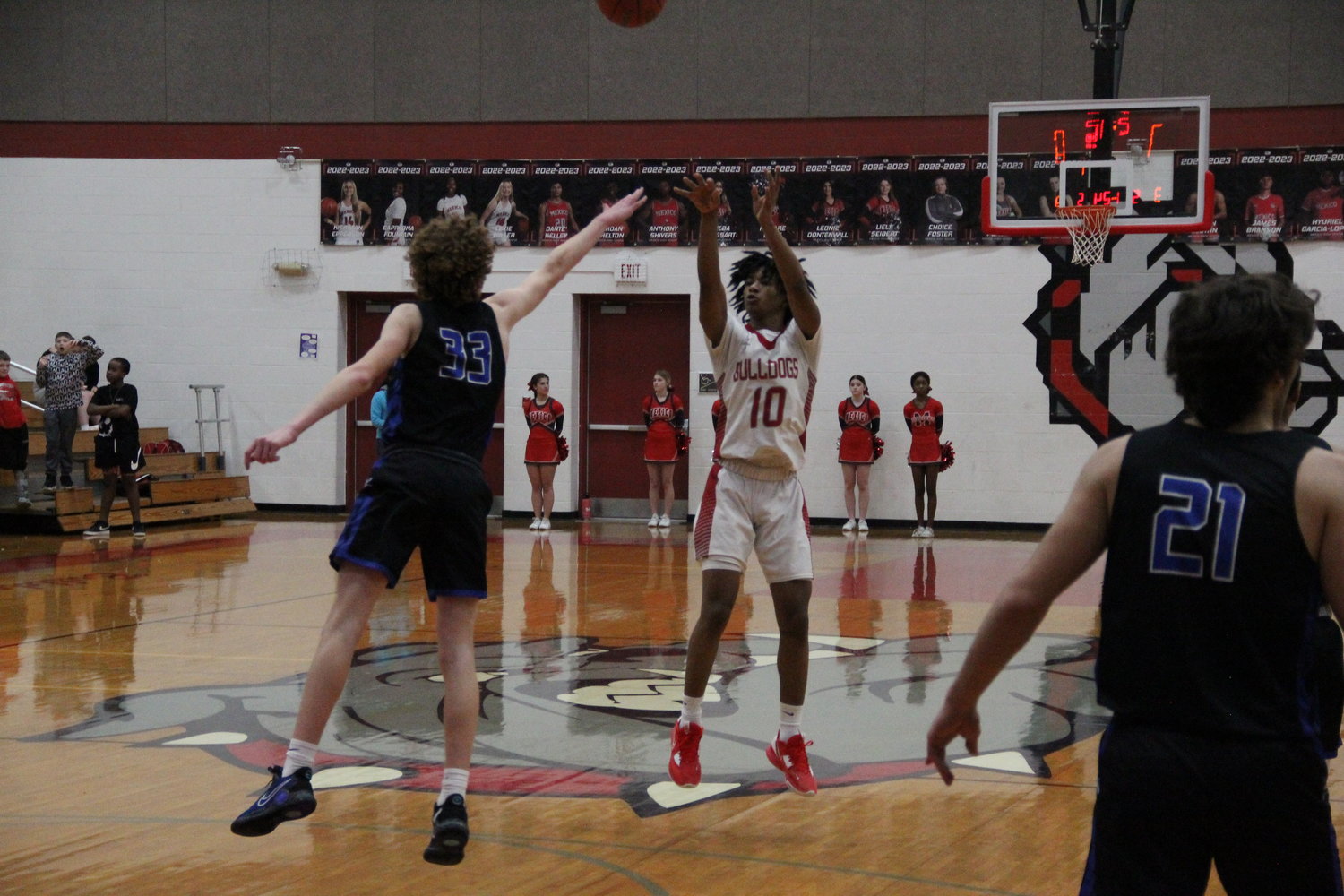 Mexico defeated Boonville at home 66-40, outscoring the Pirates 39-19 in the second half, but not before there was some contact and words exchanged between the two teams.

When Mexico (12-5) was down 15-11 early in the second quarter, DJ Long collided with Boonville’s Colby Caton — the Pirates’ quarterback during Mexico’s 27-13 district loss last year — and that resulted in a mass of Bulldogs and Pirates that needed some separation. Long shot a couple free throws prior to Mexico closing the first half on a 16-6 run to take a 27-21 halftime lead.

“It was two teams competing. Absolutely competing and trying to give it their all,” head coach Darren Pappas said. “Both teams are scrappy, and there were some plays that could have went either way. I felt like our guys were feeding off the energy of the crowd, which is a good thing. Give credit to our guys. We made some shots down the stretch and were able to capitalize from the free throw line tonight — 79 percent.”

DJ Long kept heating up as the game wore on, finishing with 22 points after having two points in the first quarter. Jordan Shelton followed with 15 points, three steals and two rim-rattling dunks that charged up the home crowd even more.

Long and Shelton showed great chemistry after the scuffle, lobbing alley-oop passes to each other. Long finished his softly with a layup, and Shelton hung briefly on the rim after catching a pinpoint pass in the fastbreak from Long.

Pappas said a big story, literally and figuratively, in the game as the interior play of Donye Nunnelly, PJ Perkins and Dante Kelley. The trio combined for 29 rebounds, with Perkins finishing with a double-double of 12 points — eight points in the fourth quarter — and 11 rebounds along with three blocks. Nunnelly grabbed a team-high 13 rebounds, recording eight in the first half.

Defending the interior makes the Bulldogs’ game of scoring in transition easier as was the case against Boonville (7-10). The two-point deficit for Mexico turned into an eight-point lead at 25-17 with a little more than a minute left until halftime.

“I just give credit to those guys for stepping up and protecting the rim as much as possible,” Pappas said. “I thought (Perkins) did a good job of finishing around the rim in the fourth quarter. I also think our guards found him at times. They left him wide open, and he got some easy buckets around the rim.”

Mexico had been in its offensive groove for a while at that point, despite allowing two Boonville 3-pointers in the third quarter. It was a Cooper Pfeiffer 3-pointer that moved the Pirates in front to end the first quarter, but Jaydon Eldridge and Anthony Shivers each hit a shot from deep to help cancel out Boonville’s perimeter shooting.

Pappas said the best way Mexico canceled out Boonville’s perimeter offense was on the defensive end as Boonville finished with four 3-pointers. Jackson Johns was the lone Pirate in double figures with 12 points to go along with 11 rebounds.

Mexico recently added another home game against a Class 4 team to its schedule for 7:30 p.m. on Thursday. That team is among the best in the state, according to the most recent state poll, in No. 2 Father Tolton (9-5), who was the runner-up in the state title game a year ago.

“We have got to execute better in the half court, move the ball, and defend a lot better,” Pappas said. “They’re a lot bigger, they’re just as quick and just as athletic so we’ve got to do a better job of playing team-oriented basketball.”

The Community R-6 girls started the Sturgeon Tournament this year in a dominant way.

The top-seeded Lady Trojans showed strong defense to pull away from its first-round opponent, South Callaway, early in its game Monday to win 46-18. Eight Lady Trojans scored, including a team-high 12 points by Sarah Angel.

Olivia Kuda followed Angel with 11 points, finishing 5-for-6 from the free throw line. Aaliyah Welch had eight points, and Brooklynn Glasgow and Kylie Brooks each had four points.

Head coach Bob Curtis said Angel was patient against South Callaway’s defense as she consistently found the open girl. He said the second quarter was where Community (16-2) took control, after a 15-6 lead following the first quarter.

“A great second quarter led to the victory as I thought we defended well and turned them over a lot, leading to some run-out layups,” Curtis said.

Community faces host Sturgeon (6-10), who defeated New Bloomfield 55-39 on Monday and has lost to the Lady Trojans 40-34 this season, at 7 p.m. Wednesday in Sturgeon’s high school gym.

The Ladybirds made sure the meeting between the Eastern Missouri Conference foes didn’t happen the same way as North Callaway came back to defeat Clopton 45-41 on Monday in the first round of the Bowling Green Tournament.

For 13 total minutes in the second half, the Ladybirds (13-7) prevented Clopton (9-8) from scoring a single bucket. The Lady Hawks couldn’t put the ball in the basket for six minutes in the third quarter and for seven minutes in the fourth quarter, when North Callaway took its first lead at the 7:38 mark and then final lead with 1:38 remaining.

Head coach Tim Turlington said the defense was stellar in the second half, but the Ladybirds’ free throw shooting was ultimately the difference as North Callaway finished 15-for-21 at the line while Clopton was 8-for-16. Riley Blevins and Natalie Shryock combined to go 6-for-7 at the line in the fourth quarter.

Clopton started hot from the field like last week, taking a 17-13 lead after the first quarter and then a 29-21 halftime lead. The Ladybirds were down by as much as 11 points in the first half but ultimately allowed only one double-digit scorer — Braya Smith with 13 points — for the Lady Hawks compared to three last week.

North Callaway won its opening game in the Bowling Green Tournament for the first time since 2020 and will face top seed Elsberry (14-4) at 5:30 p.m. Wednesday in the high school gym after the Lady Indians defeated Van-Far 47-29 on Monday.