Myers, Schmidt drive them in Ladybirds’ 7-2 win vs California

The Ladybirds played their second … 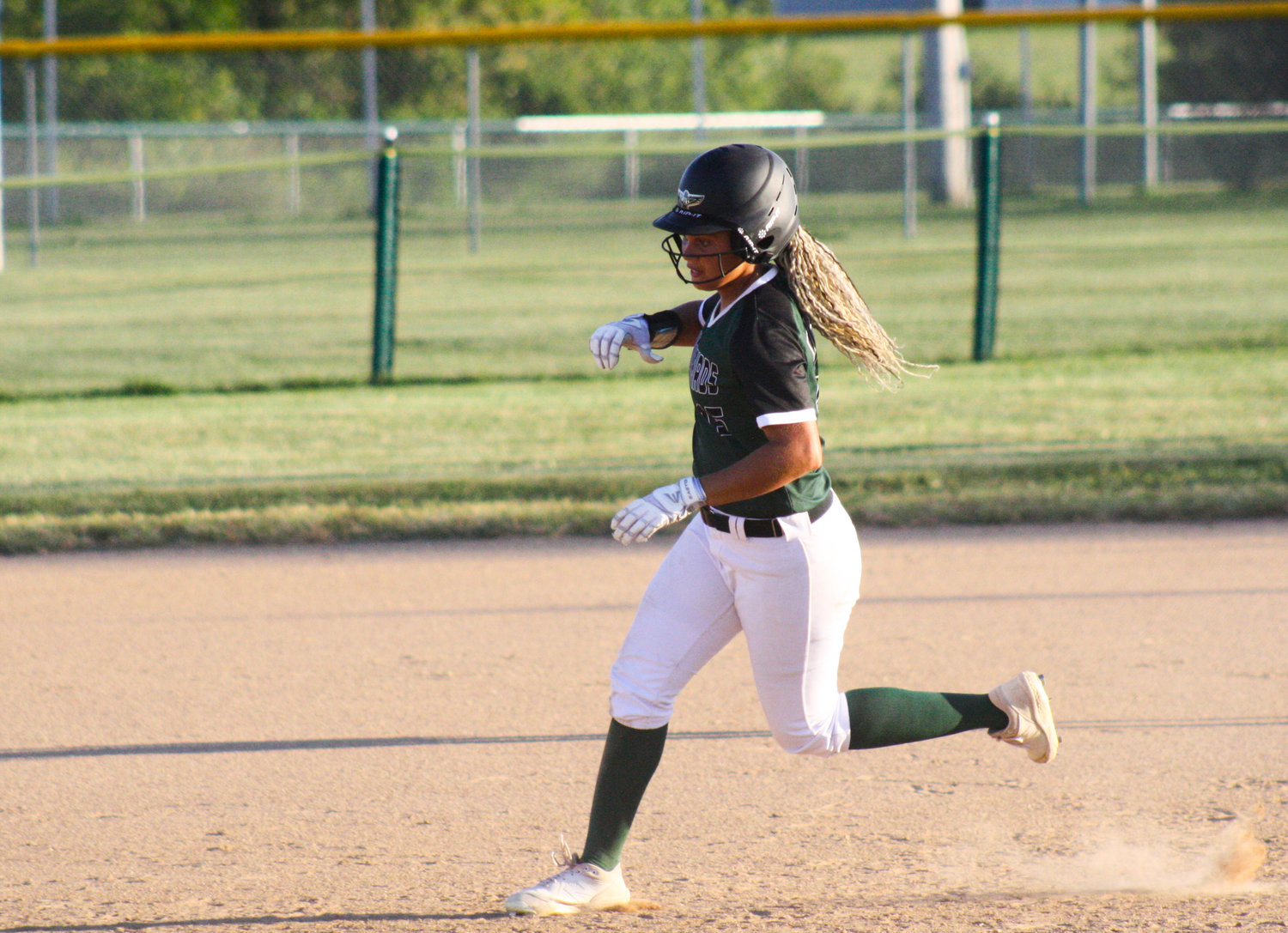 North Callaway freshman outfielder Kymorie Myers circles the bases Tuesday in the Ladybirds' 7-2 win against California on their home field in Auxvasse. Myers drove in three runs, including two on her first career triple, from the No. 3 spot in the order.
Jeremy Jacob Photo
Posted Tuesday, September 20, 2022 11:43 pm
By Jeremy Jacob, Sports Editor

Myers, Schmidt drive them in Ladybirds’ 7-2 win vs California

The Ladybirds played their second non-conference game in as many days under a scorching sun and were able to scorch the ball at the plate, defeating California 7-2 and notching a victory against a team that had lost five games going into the day, with three happening against state-ranked opponents. Freshman Kymorie Myers and sophomore catcher Abigail Schmidt each had three RBI as the No. 3 and 4 hitters, respectively. Jalyn Leible added an RBI from the No. 2 spot, and leadoff hitter Corynne Miller went 3-for-3 with two runs and two bunt singles.

Head coach Mariah McKee said North Callaway was more selective at the plate Tuesday compared to Monday’s 16-4 home loss to Class 3 No. 7 Hallsville. The Ladybirds were swinging at fewer bad pitches, only striking out once in the fifth inning rather than 10 times against Hallsville. She said it helps when the No. 3 and 4 hitters are piling up the RBI as well.

“My hitters came through and got me some ribbies,” McKee said. “It was just really good to see them put stuff together instead of just spacing out here and there.”

California picked up four hits against Lauren Speight that turned into one run in the first inning, but North Callaway had the immediate response in the bottom half of the inning. Miller bunted for a single and Leible walkled to set up an early RBI opportunity for Myers. She lined a single that scored the tying run prior to Schmidt doing the same to give the Ladybirds a 3-1 lead.

Seven straight Lady Pintos were retired by Speight until they broke through with a run in the fifth inning. Just like before, North Callaway set the table for Myers and Schmidt in the bottom half of the inning.

California pitcher Gabrielle Rohrbach had two of her three walks in front of Myers, who hit a home run in two of her previous three games. She smoked another pitch past the infield, but she couldn’t jog this time. Myers sprinted into third base with a two-RBI triple — her first career three-bagger — prior to Schmidt picking her third hit and third RBI for the 6-2 North Callaway lead.

“It’s just nice having her in the three hole,” McKee said. “Anytime she makes contact, you know it’s going to be solid contact. Even if it’s straight to somebody, it’s still going to be hit hard. Knowing that and being able to have my first getting on base, that’s big.”

North Callaway (4-7, 3-2 EMO) focuses back on the Eastern Missouri Conference on Thursday at home against Montgomery County (4-10, 1-5 EMO).

Look for the full version of the story in the Sept. 24, 2022, edition of The Mexico Ledger or on the website the same day.

The Lady Bulldogs defeated North Central Missouri Conference foe Moberly 12-11 on Tuesday at home after Kierstan Epperson lifted a walk-off RBI single to right-center field. Mexico started to rally in the 11-batter seventh inning after a couple errors and a couple Lady Bulldogs were hit by pitches.

Epperson finished 3-for-5 with three RBI and a double, Maddy Feger went 3-for-5 with two doubles and an RBI, Jo Thurman had two RBI, and Hannah Loyd picked up her two RBI on a game-tying double in the seventh.

Mexico was dealing with an 11-6 deficit going into its final turn at the plate. After Abby Bellamy and Lexie Willer reached on errors, Kenley Jones began the scoring with an RBI single. Thurman became the second Lady Bulldog hit by a pitch in the inning — and second in the game for Moberly pitcher Kennedy Messer — after Shi Exendine was plunked earlier, making it 11-9.

With the bases still loaded, Feger worked to a 3-2 count and thought she had walked but was rung up by the home plate umpire for the second out. Loyd had an 0-for-3 in the game until she lined a ball out of the reach of the third baseman down the line to tie the game. The Lady Spartans, who carried a four-game winning streak into Tuesday thanks to a championship at the Cairo tournament on Saturday, had a base open so they opted to intentionally walk Bellamy to face Epperson, who burned them on the fifth pitch of the at-bat.

Moberly (6-10, 2-3 NCMC) had a 5-3 lead after the first inning thanks partly to a three-RBi home run from Jordan Pasbrig, who finished 2-for-3 with five RBI and two home runs. After a two-run fourth inning for Mexico, the Lady Bulldogs had two hits in the next two innings before their do-or-die seventh.

Mexico (12-9, 4-2 NCMC) plays in the Versailles/California Turf War Tournament on Friday and Saturday.

The first two batters signaled a good day for Van-Far on Tuesday.

The rest of the game went differently as the Lady Indians lost 7-1 at Eastern Missouri Conference foe Montgomery County despite the first two batters of the game resulting in singles. Carmen Wilburn and Madelynn Caldwell hit safely, picking up two of Van-Far’s three hits, and Montgomery County’s Aliviah Fischer had a double and drove in three runs off a home run.

In the first inning, Wilburn reached on a pop fly, and Caldwell bunted her way on base. Mara Jensen grounded into a double play, but Hailey Lowry’s ground ball wasn’t fielded properly to allow Van-Far to take a 1-0 lead after one inning.

The Lady Wildcats (4-10, 1-5 EMO) scored on error to even the score in the third inning prior to a six-run sixth inning. Two errors kept the door open with two outs in the sixth long enough for Fischer to make it 7-1 with a drive over the center field fence.

In Mexico’s previous four wins against the Lady Tigers, the Lady Bulldogs have needed a deciding set to put them away, including a five-set win earlier this season at home. On Tuesday in Kirksville, Mexico earned its first three-set sweep of the year, and first all-time since Oct. 14 last season against Marshall, winning sets 25-18, 25-17, and 26-24.

Jaclynn Kline led Mexico with 12 kills, making her the lone Lady Bulldog with double-digit kills. Ali Walotka led with 16 digs and was one of three Lady Bulldogs to finish with double-digit digs along with Jessica Stephens’ 14 and Tessa Haefling’s 13. Lizzie Joiner and Ally Wilson finished with 11 and 10 assists, respectively.

The Lady Bulldogs had eight errors at the end of the first set but had 10 errors in the final two sets. They had five miscues and a match-high 11 kills in the tight third set.

Mexico (4-7-1, 3-3 NCMC) has a rematch with Bowling Green (4-7-4) at home Thursday, who the Lady Bulldogs split a tournament match with Saturday at the New Haven Round Robin. The Lady Bobcats were swept Tuesday at Centralia (5-3).

Eldon’s Nathan Reynolds won the individual title with a time of 17:47.20, and Knob Noster took the team crown with 26 points — four straight finished behind Powell.

MMA has the Moberly Invitational on Sept. 29.