The opening night jitters were felt by Paris early in its home game Friday against Marion County, but the … 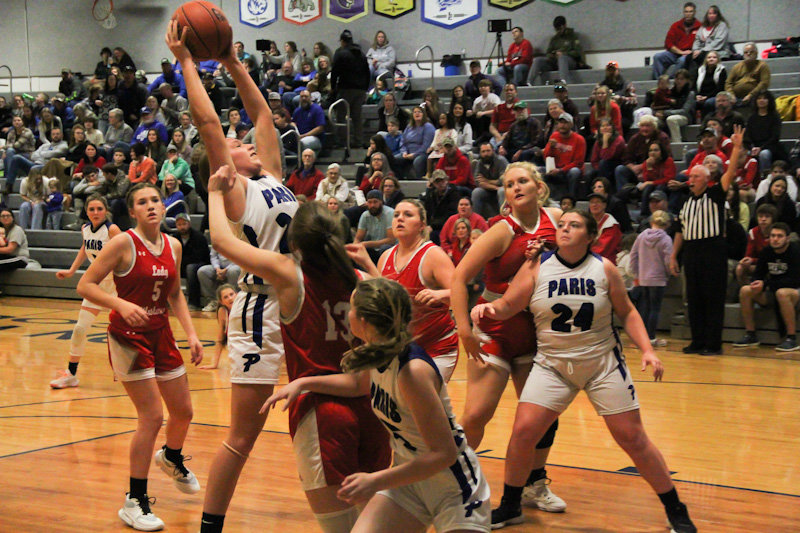 Paris freshman Reese Sutton reaches up for a rebound Friday night at home against Marion County. Sutton had a big first night with her double-double of 21 points and 12 rebounds and helped the Lady Coyotes win 34-31 in overtime. The boys followed with a 43-31 victory behind the 16-point, 13-rebound double-double from junior Walter Rucker.
Jeremy Jacob Photo
Posted Saturday, November 19, 2022 1:23 am
By Jeremy Jacob, Sports Editor

After going to overtime tied at 30, Paris defeated reigning district champion Marion County 34-31 thanks to a game-winning steal by freshman Emma Ashenfelter and a clinching basket by Reese Sutton. Ashenfelter grabbed three rebounds and tallied six steals and five deflections to lead a tenacious defensive effort by the Lady Coyotes (1-0) that was propped up by a double-double from the freshman Sutton at 21 points and 12 rebounds and 11 rebounds from senior Rachel Shoemyer.

The game was about even all night, with Paris and Marion County (0-1) each coming up with rebounds or even knocking the ball out of bounds when two players made an equal effort for the board. The Lady Coyotes aren’t the best shooters, head coach Garrett Thomas said, but Ashenfelter and his girls did a great job of winning the game by making Marion County uncomfortable advancing the ball.

“Emma really did a good job being pesky,” Thomas said. “That’s a really good word for her is pesky. She gets in passing lanes well. She gets up, she’s aggressive, and she doesn’t have any quit. When you’re constantly up pressuring the ball, things are going to go right every once in a while. It really gave them fits at times.”

Through four quarters and an overtime period, Paris had seven field goals all night and relied on its trips to the free-throw line to pick up its points. The Lady Coyotes went 19-for-41 on free throws, driving to the rim and enticing Marion County to go into the penalty with minutes left in each half.

When Paris really needed to score from the field, it was able to convert, typically after forcing a turnover. Marion County’s Kennedy Hathaway hit a 3-pointer to help the Lady Mustangs build an 11-6 lead in the second quarter. The Lady Coyotes closed the half strong to take a 12-11 intermission lead, following Kennedy Ashenfelter receiving the pass from her sister Emma — unlike the exchange that happens between the pitcher Kennedy and catcher Emma during softball season.

“We kind of emphasize getting to the free-throw line so far this year,” Thomas said. “We’re not great shooters, but we shoot OK from the free-throw line usually. We try to get the ball inside as much as we can. When we get it in there, they usually like to collapse and that leads to them fouling a little bit more.”

The Paris boys’ offense felt locked out early Friday night at home in its opener against Marion County but eventually locked down to a decisive victory.

The Coyotes outscored Marion County 11-4 in the third quarter and 22-15 in the second half to win 43-31, reaching half their win total from a year ago by notching the first victory two months sooner this time around. Eight Coyotes each pulled down a rebound with Walter Rucker leading the way with 13 rebounds as part of his 16-point double-double. Colton Poddany followed with nine rebounds along with his nine points, the 6-foot-7 Alex Williams had three boards with eight points and point guard Evan Smothers had five rebounds on his stat line of seven points, four assists and one steal.

Early in the game, head coach Jeremy Skinner said the Coyotes were excited, perhaps a little too excited, as they committed several turnovers to allow Marion County to take a 9-4 with about two minutes left in the first quarter. Three turnovers in as many trips and five that early in the game made Paris flip the switch, or perhaps the screen.

“We made a little change on offense — screen across with the post players,” Skinner said. “That got us a couple easy buckets. Our spacing wasn’t very good, we tried to force it too quick and we had post players posting up on top of each other with no space. Everybody was following the ball instead of keeping space.”

Bucket after bucket to Williams and Poddany and then from Ryan Breid on an inbounds pass to Smothers gave Paris a 14-9 lead with six minutes left in the second quarter. Rucker galloped down the floor for three baskets near the end of the first half to finish with eight points after two quarters.

The Coyotes widened their lead in the third quarter, holding the Mustangs without any points until Porter Britt converted in the final two minutes, but it was 32-20 Paris following three quarters. Smothers positioned himself in front of an inbound pass and laid in the bucket in the final seconds of the quarter, demonstrating what Skinner believes Paris did so well on the defensive end.

“It all came down to our defense at the start of that third quarter,” Skinner said. “We just communicated. We switched on the screens, made sure we bumped the screens and we quit following them to the basket. We got in between them and the basket whenever they cut. Without their penetration, if you don’t follow the screens, they’re going to have trouble scoring. They’re a good 3-point shooting team so as long as you stay up on them, you can negate that.”

Mayfield will play the game at the next level after signing with NJCAA Moberly Area Community College, who added the sport last fall and resides in Region 16. The Lady Bulldog senior signed her letter of intent in a ceremony Friday at the Mexico Sports Complex.

Mayfield didn’t play her junior year but returned as the team’s No. 1 pitcher this season and performed to an all-district season, compiling a 2.74 ERA, a 14-4 record, 55 strikeouts and 22 walks in 89⅓ innings.

Mayfield said she plans to major in surgical tech and is looking forward to playing for Greyhounds and two of her travel teammates who had already signed, Boonville’s Emma West and Moberly’s Madyson Klostermann. Centralia’s Abby Reed and Paris’ Gracie Hatton are also among the players to choose MACC.

“The coaches are really nice,” Mayfield said. “They’re a good overall team, they have the major that I want to study and I’m not too far away from home.”

Head coach Curt Riley started with the program this year, saying Mayfield’s year was “a little bit slow” early in the season, but she became someone Mexico could rely on and keep the Lady Bulldogs in the game so the offense could rally. The Lady Bulldogs posted their best record (19-13) in three years and posted its lowest runs against average (5.1 runs per game) in that many seasons.

“A lot of times, when you take a year off, you struggle to get back in the flow of everything,” Riley said. “She started to get a lot stronger and pitched a lot of great softball for us this fall. She earned this. She did the things we needed her to do to keep us in ballgames.”

Look for the full stories in the Nov. 23, 2022, edition of the Mexico Ledger and on the website on the same day.

Community R-6 senior Gavin Allen will be taking his strikeout stuff to the Woods.

In a letter of intent ceremony on Thursday at Community R-6 High School in Laddonia, Allen made it official that will be pitching for NAIA William Woods University in Fulton. The Owls play in the American Midwest Conference and are coming off a 30-18 season — their first 30-win season since 2018.

Through two spring seasons and one fall season, Allen has struck out 163 batters in 95⅔ innings with one more season coming up in the spring. At the plate, he owns a .377 batting average and has 40 career hits, with four of them going as home runs.

Allen credits the people around him, including his coaches, for helping him earn the opportunity to play college baseball. He is looking forward to the new friends he will make at William Woods.

“I am very excited to meet my teammates and continue to get better and hopefully in the future help our team win,” Allen said. “I would like to thank my family friends and all my coaches. I wouldn’t have had the chance to play college ball without them.”

Gavin has been a great asset to the R6 baseball program and we are excited to see his future play out,” head coach Joel Krato said.