Mexico football has a secret weapon.

Besides the coaching staff and the community, the Bulldog mothers show unwavering support. The team showed its gratitude for that support Friday night by … 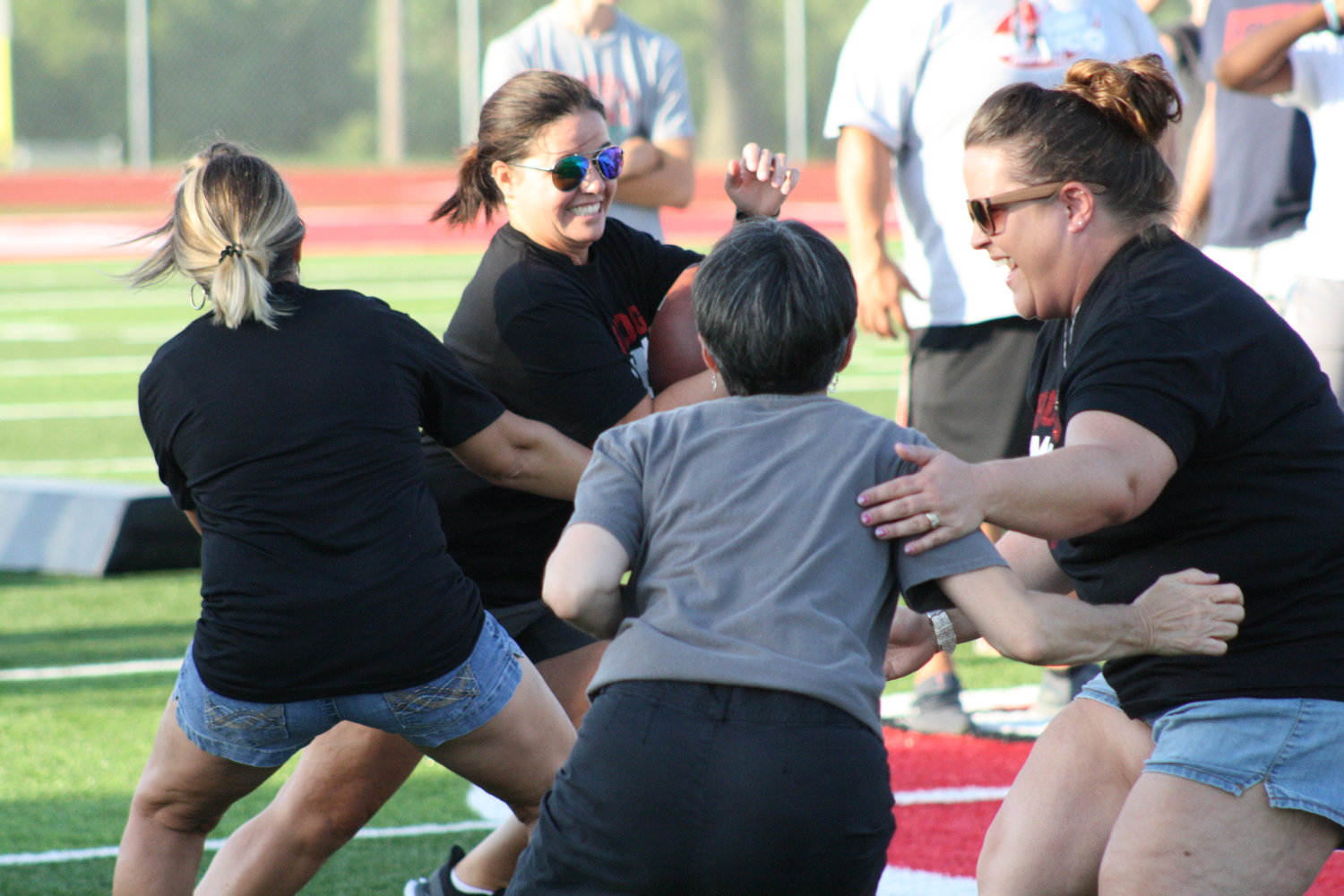 Mexico football hosted its annual moms clinic Friday night at Mexico High School. The Bulldogs are assisted by their mothers throughout the season and hold this event to give something back.
Jeremy Jacob Photo
Posted Wednesday, August 17, 2022 10:07 am
By Jeremy Jacob, Sports Editor

Mexico football has a secret weapon.

Besides the coaching staff and the community, the Bulldog mothers show unwavering support. The team showed its gratitude for that support Friday night by hosting a moms clinic at Mexico High School. Mothers had their opportunity to step between the white lines and experience the drills their sons repeat in practice.

Head coach Steve Haag said he recalls the Mexico clinic going on a hiatus while he was an assistant coach but brought it back when he was hired as the head coach in 2014, having it every year since then. Haag said Friday’s clinic was a way to show the program’s appreciation for all the Mexico moms that devote their time and energy during the season and also provide an understanding of what is taught to their children.

“The moms get to see a little bit about what we do,” Haag said. “They do a lot for the boys so the boys should be appreciative of what they do. We’re glad to come out here and honor them and show them a little bit how we play Mexico football.

“It’s kind of just grown,” Haag said. “They like it. We get them all a T-shirt. We used to not include the boys, but we bring the boys out with them so they can spend some time with their moms.”

Whether it’s the first year or the fourth year a mom has participated, Haag said he wants them to have fun, and at least, have a basic understanding of everything their sons have to know to be a good football player. For these reasons, the clinic isn’t as long or comprehensive as a typical Bulldog football practice but just enough for some quality time with their sons.

The moms started the camp separated into three groups, running drills pertaining to aspects like agility, tackling and blocking and ended the night by converging into a scrimmage at the 50-yard line to be tested on what they learned. The coaches and their sons imparted their knowledge along the way and witnessed the joy on the faces of their moms — the same joys they feel every Friday night.

“They didn’t grow up playing football,” Haag said. “Their knowledge of football could be a very broad spectrum. We want to make sure when they watch us play, they can see a little bit and they can understand what we do. When they talk to their son, they’re knowledgeable a little bit about what position their son plays and what we expect from them.”

Haag said he and the other coaches try to do as much as possible for the boys but know they can’t fulfill every need. The mothers have shown to be a valuable part of the team.

“Our moms do a great job,” Haag said. “We feed (the players) every Thursday night. We feed them after the game. They help us organize that. We have great sponsors throughout the community that help donate meals to the boys. If we have to get something organized, they’ll step up and they’ll do it for us.

“You need that support. Those moms are going to step up and do that, and we have dads that do that as well, but they want to be part of it. They love their sons and they’re appreciative so we want to make sure we can provide a program that they’re proud of and that their sons are proud of being part of.”