The week continued to be a great one for Mexico girls tennis.

On Wednesday, a day after sweeping their regular season finale, the Lady Bulldogs placed four on the all-conference team at the North … 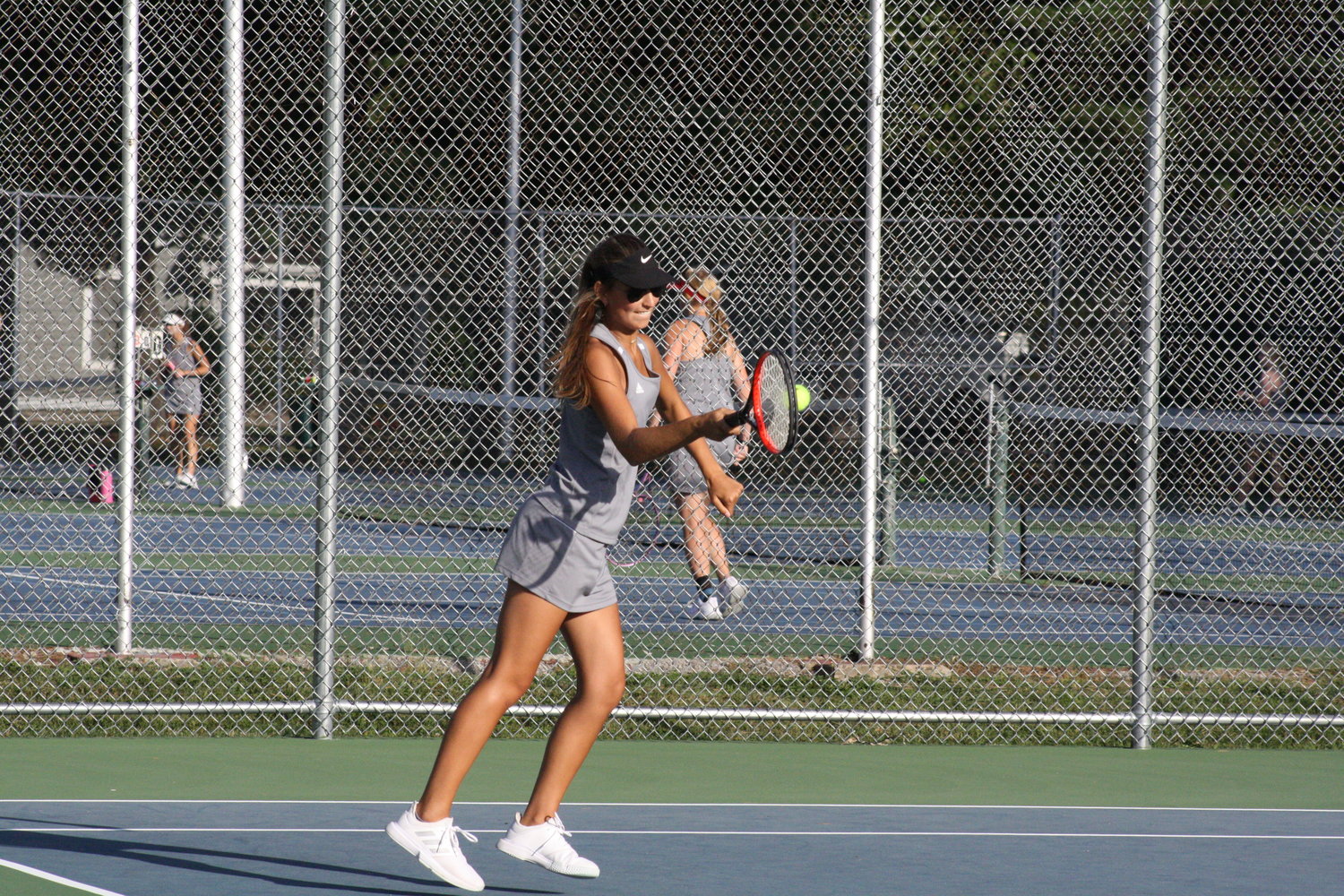 The week continued to be a great one for Mexico girls tennis.

On Wednesday, a day after sweeping their regular season finale, the Lady Bulldogs placed four on the all-conference team at the North Central Missouri Conference tournament in Marshall. Lucy Gleeson, Jyllian Whitworth, Messiah Simpson and Claire Hudson all appeared on the team while helping Mexico finish third as a team.

Hudson and Gleeson won No. 1 doubles, Whitworth earned all-conference in No. 4 singles and Messiah Simpson was all-NCMC in No. 6 singles.

Mexico begins its district season today as the individual tournament in Class 1 District 7 will be today at North Point High School in Wentzville. Team districts will be held Monday through Thursday at the same place.

Mexico closed its regular season with a win Tuesday at home.

The Lady Bulldogs played a young Battle team — who consisted of six girls in the dual at Fairgrounds Park — and won 9-0. Mexico lost only one game during the day, but otherwise, 8-0 scores were displayed across the board.

Head coach Kim Costley said Mexico needs to refocus quickly as the North Central Missouri Conference tournament will be hosted today in Marshall and individual district play will be on Saturday at North Point.

“Battle has a very young team,” Costley said. “We will go to Marshall tomorrow for the conference tournament. The conference is tighter than it’s been in awhile, so I’m anxious to see where we end up as a team.”

Estrella Lopez lost a game in the No. 2 singles match but won 8-1. She and doubles partner Jocelyn Garcia each had two victories. Other Lady Bulldogs with wins in singles included Katie Gooch, Jyllian Whitworth, Lani Blair and Messiah Simpson. The pairs of Claire Hudson and Lucy Gleeson and Alice Eggen and Daida Herrera-Garcia won varsity doubles matches after usually playing in junior varsity matches this year.

Kennedi Rowe proved to be among the best in the North Central Missouri Conference.

The Mexico senior earned all-conference honors Monday at Kirksville Country Club after shooting a 94 to take fourth place — with the 10 best scores being named all-NCMC. The Lady Bulldogs finished last among six schools, shooting a 504.

Rowe finished behind conference champion Addy Davis’ 79, Fulton’s Grace Ousley in second with an 85 and Kirksville’s Maya McKiver in third with a 92. Hannibal’s Grace Kirby finished just behind Rowe with a 95.

Alexis Henderson has Mexico’s next best score at a 124, Ella Connell shot a 138 and Reagan Craig finished with a 148.

Kirksville won the team NCMC title after shooting a 370.

Colonels break away from Mexico in 3-1 win

He and the Bulldogs played at Class 1 No. 7 Missouri Military Academy in a crosstown matchup that the Colonels won 3-1 because of a relentless breakaway attack. Scanavino made 12 saves for Mexico, including 10 in the first half, but Gorka Yarte was able to beat him twice and Kellan Mugisha did so once for the insurance goal.

Brendan McKeown scored the Bulldogs’ only goal in the 13th minute to tie the game following Yarte’s first display of speed.

MMA head coach Eliot Goodwin said he was proud of how his team bounced back a day after a 6-0 shutout at home to Class 1 No. 3 Father Tolton.

“It’s nice we had the opportunity to correct last night,” Goodwin said. “We have to recognize at moments if Mexico, like they did, play a high line, there’s going to room in behind. Exploiting that, recognizing that moment and taking advantage of it is key for us. Their goalkeeper had a great performance. He made some outstanding saves and credit to him for keeping them in the game.”

Mexico head coach William Gleeson said the Bulldogs haven’t seen a team attack them the way MMA did until Thursday. The Colonels were able to boot the ball several times to a player in stride — Yarte in the 10th and 53rd minute and Mugisha in the 58th minute.

Gleeson said Mexico was better in the second half dealing with that thanks to defenders like Declan Gleeson, Bryce Carter and Kevin Lopez clearing the ball. He said having another defender, Jibran Rodriguez, would have helped match MMA’s speed better.

“We’re missing one of our key defenders. He’s in Iowa right now,” Gleeson said. “We’re missing his speed and his ball control in the back. It just took us a little bit to adjust to that style of play. They popped it over top of us a lot.

“We came out real sluggish and real slow start and no communication. It was rough to start off. We kind of picked up a little bit, but we never got that communication going. That was pretty much our downfall for this game. We had a great chance to score, two guys going for the same ball. No communication and they fumbled it.”

Mexico managed six shots all night, oftentimes possessing the ball in the penalty box but were unable to create competitive shots outside of the McKeown goal early in the first half.

Goodwin said there was some frustration when the score was tied at halftime, realizing MMA could have gone into the half with a lead, but followed its strategy until the goals happened. He said players like Ethan Hersh, who was suspended Wednesday, and Liam Mannion had “outstanding” second halves, Goodwin said, feeding the ball to Yarte and Mugisha.

“I think it comes from our midfield,” Goodwin said. “We have a couple of quick players — some quick forwards we’ve got that we rely on to use their pace to get in behind.”

Southern Boone’s Drew Dial set a school record for fastest goal and clocked in at 13th fastest in MSHSAA history with a score 24 seconds into Mexico’s 5-0 loss at the district foe Eagles. Southern Boone took a 3-0 lead into halftime and handed the Bulldogs their second clean sheet of the season after being shut out 2-0 at district foe Kirksville earlier this year.

After Dial’s abrupt goal, Mason Ahern scored two of the next four goals for Southern Boone (6-7-1).

Mexico walked off by Moberly 5-4

Moberly had its revenge on Mexico in more ways than one.

Mexico not only lost Thursday at Moberly, but the Lady Bulldogs allowed four runs in the seventh inning for the 5-4 walk-off loss a week after winning via walk off against the Lady Spartans in Mexico.

Eboni Mayfield had a solid game going into the seventh inning, allowing five hits and no walks and inheriting a 4-1 lead. She allowed four hits — all with two outs — following an outfield error that made every run in the inning unearned. Chloe Feguson picked up the game-winning single after the previous four Lady Spartans (10-10, 5-3 NCMC) reached base.

Abby Bellamy and Jo Thurman each went 2-for-4 with two RBI, with Bellamy’s hits both going for doubles.

Bellamy picked up the first double and her two RBI in the third inning to give Mexico a 2-0 lead. A leadoff walk allowed by Maddison Taylor came around to score along with another runner on Thurman’s single in the sixth inning.

Mexico was locked in a one-run game Wednesday at Hannibal two days after being on the losing end of one.

After losing 4-3 to Kirksville at home, the Lady Bulldogs’ offense found a couple innings that wrapped up the North Central Missouri Conference game in five innings 12-2. After leading 3-2 after three innings, Mexico scored four runs in the fourth and five in the fifth.

Abby Bellamy finished 2-for-2 with three RBI, Hannah Loyd picked up two RBI and two extra-base hits to go along with her 3-for-4 day, Lexie Willer and Kenley Jones each had two RBI and Emma Cunningham allowed six hits and one earned run in five innings.

Mexico trailed after allowing a run in the first inning but didn’t take long in the second inning to take its first lead following Loyd’s triple scoring on an error and Shi Exendine bunting a runner home. In the third inning, an error by Jones gave Hannibal (0-20, 0-8 NCMC) another run but her walk gave Mexico the lead back.

The first five Lady Bulldogs reached base to start the fourth inning, highlighted by an RBI single by Bellamy and an RBI double by Loyd. Maddy Feger stole her third base in the fifth inning to set up a sacrifice fly for Bellamy and then Willer tripled and Jones singled for the 12-2 lead soon after.

Mexico allowed Montgomery County to tie the match Thursday but could have taken the advantage back.

The boys finished fourth out of 12 teams at 138 points. Wentzville South won with a total of 36 points.