Kaylynn Pehle began her senior season the way she wanted. 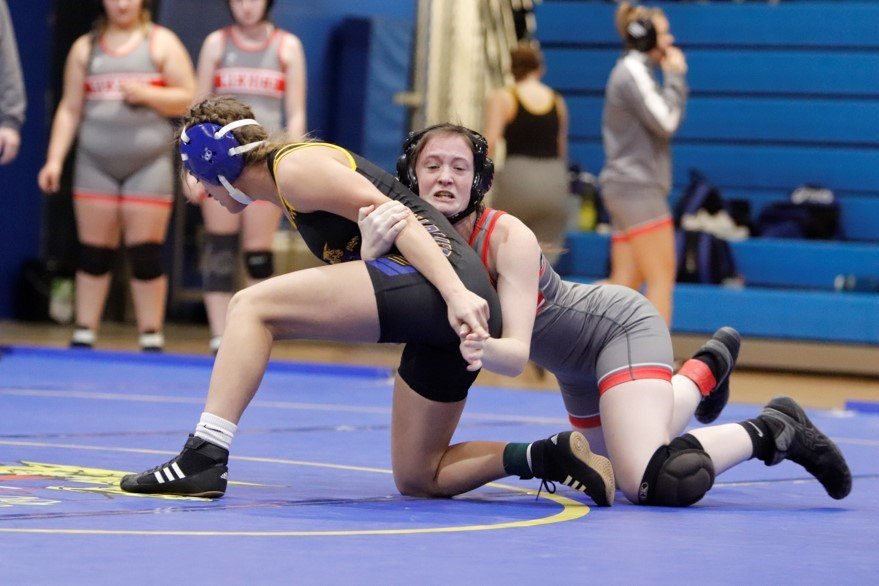 Kaylynn Pehle began her senior season the way she wanted.

The Mexico wrestler won a first-place medal in the 115-pound weight class at the Mexico girls’ first tournament and action of the season Saturday at Wright City. Two Lady Bulldogs won second-place medals while four finished in third in their respective weight classes.

Pehle had to grapple with freshman teammate Layla Fierge in the first round, winning by an 18-2 technical fall. Fierge went on to lose to Wright City’s Samantha Yates by pinfall to finish third prior to Yates losing by pinfall to Pehle just past the minute mark.

Junior Karisa Hayden and freshman Taylor Parker both competed in the 190-pound weight class, finishing second and third, respectively. Hayden lost by pinfall to Hazelwood West’s Lexington Johnson, scored a late pinfall in the fifth minute against Pacific’s Marissa Johnson, defeated Union’s Destiny Vlcek by pin at 2:23 and then won by pin at the 1:46 mark against Parker. Parker lost by pin to Lexington Johnson and won by pinfall in 44 seconds against Vlcek prior to the loss to Hayden.

In the 235-pound weight class, freshman Alexus Johns earned a second-place finish after initially defeating Wright City’s Macy Olloa by pinfall at 1:50 and pinning Sullivan’s Kenzy Mattingly not long after the four-minute mark before being pinned quickly by Mattingly’s teammate, Reya Bristow. Johns finished her day by pinning Winfield’s Lillian Dearduff in 54 seconds and taking a forfeit win in the final round.

Freshman Kiya Smith finished third out of four wrestlers in the 125-pound bracket, by being pinned twice but defeating freshman teammate and fourth-place finisher Emileigh Woods by pinfall in 43 seconds.

Sophomore Alizabeth Welch was third at 105 pounds after lasting at least three minutes in her matches against Hannibal’s Erica Williams and Union’s Josey Alfermann until she was pinned.

Mexico girls fall behind early in 65-14 loss to St. James

The Mexico girls had to be sharp Saturday in their first game of the season.

The Lady Bulldogs faced reigning fourth-place Class 4 team St. James in the BSN Shootout in Rolla and lost 65-14 after trailing 35-12 at halftime and being shut down in the second half.

“We missed some open looks in the shots we had,” head coach Ed Costley said. When playing one of the top teams in the state, it will hurt having a combination of missed shots and turnovers."

One of those steals led to the first basket of the game as she found Lexie Willer on the fast break. The Lady Tigers, who had five upperclassmen including the all-state junior Emily Recker from the last year’s 25-win team, went on a 33-7 run in the first half before locking down defensively in the second half.

“The goal is to continue to focus on our identity as a group and focus on segments of the games for the next few weeks,” Costley said. There are a lot of girls being put in roles early that they will need to grow into.”