She also knows there will be standout women at other colleges, so it was important for the soon-to-be … 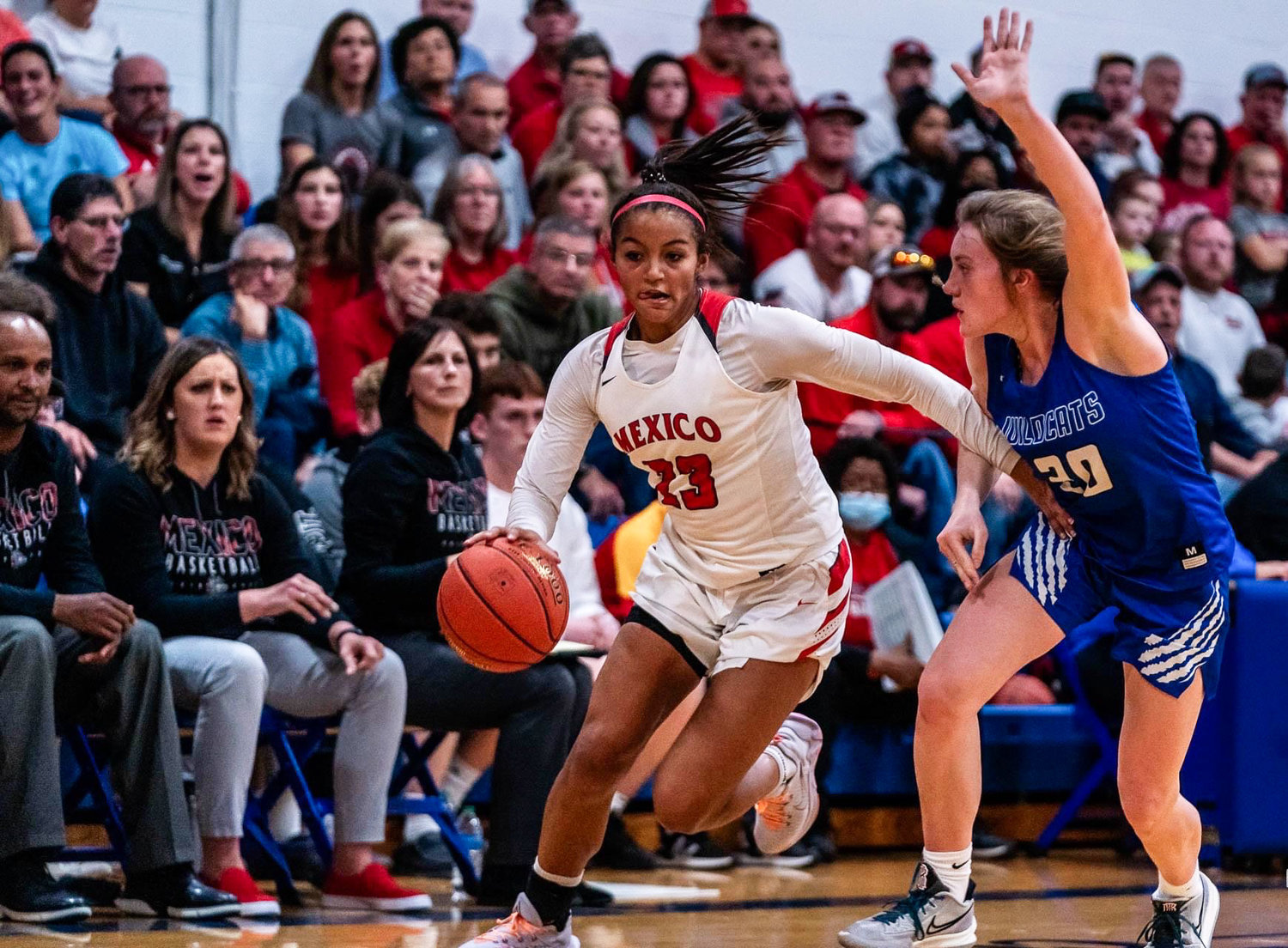 She also knows there will be standout women at other colleges, so it was important for the soon-to-be Cougar to work on some things during the summer.

Practicing in the warmer months isn’t anything new to Miller as she has worked out many times with Mexico girls basketball head coach Ed Costley over the previous four years – all of this culminating in what she hoped to be this fall: a college basketball player.

“I’ve worked out with him so many times during the summer,” Miller said. “That was just something that made me happy because I always told myself, since I was a little girl, that I would be going to play college ball.”

Miller said elementary school was when the dream was simply a dream because she recalls seeing just how talented every player was in college and was unclear whether she would make it to that level. In her four years with Costley, that dream gradually turned into a reality and was fully realized last August when she committed to Columbia College.

Still, Miller realizes that this is just the beginning of the next step in her career as nothing is going to be given to her. Hence why working out this particular summer was so important, she said.

Miller’s summer has included a job and getting her wisdom teeth removed, so she hasn’t had much time after June to work out. She is still confident she’ll be ready by fall.

For a few days this summer, Miller traveled to Columbia College to partake in “league nights,” which were five-on-five games involving women from colleges in the state. She met and played with some other Cougars in these games. The games were “hard” partially because everyone there was “out of shape,” Miller said, but it was also because of the nature of the college game.

“It’s a lot faster so you have to mentally prepare yourself to be running up and down the court way more than you would in high school,” Miller said. “They’re pushing you to be better. You’re pushing them to be better.

“It was really hard, but it was super fun. I got closer with the girls. I think it’s a great idea, and I think we should continue to do that.”

Columbia College is coming off a season that saw them make it to the opening round of the NAIA tournament and is going into a season that will see them bring back players like All-American Mallory Shetley and add players like Macon’s all-state player Lexi Miller.

Mexico’s Miller has earned her fair share of awards as well, being named all-state and all-North Central Missouri Conference, scoring 1,223 points (13.4 per game), pulling down 708 rebounds (7.8 per game) and collecting 224 steals (2.5 per game). Miller scored her 1,000th career point in a January game against Kirksville.

Costley said Miller will be the fourth girl he’s coached to go from Mexico to Columbia College, following Whitney Widaman, Danielle Louder and Reghan Smith. He said Miller asking him to work out with her emphasizes that she’s a perfectionist and shows the dedication that she had since she was young.

“We had our kids camp back at the end of May,” Costley said. “Mya was here working with the kids camp. She had a station going on so it was an opportunity for her to still be around kids, even her own siblings, and be able to help out. I’m sure she remembers growing up and being a part of that too.”

Costley said the drills Miller has been doing as a college recruit are designed to improve skills like ball handling and footwork and being better outside the post. College players tend to be more physical and don’t even allow access to the paint sometimes so finding ways she can still help her team is important.

“For the most part, you’re on the same level of athleticism,” Costley said. “The difference, I feel like, when you get into the college game is how far can your skills separate you from the other players.”

Miller has been an “outstanding rebounder” in her Mexico career, Costley said, as she has had multiple seasons where she has averaged north of eight rebounds per game and has recorded many double-doubles.

While she has found ways to get to the rim, Costley said Miller has been adjusting her mid-range game whenever she is stymied. Recognizing she doesn’t have to shoulder as big of a load in college will also benefit her.

“Playing at the college level, you don’t have to be the No. 1 player,” Costley said. “You’re a part of the puzzle, and not all the weight is on you. So, all you got to do is learn how to do the little things.

“Mya has a determination never to quit and will go after you no matter what. She’s got to work on being more consistent with the mid-range shot. For her, if she can just really develop that mid-range shot, the pull-up jump shot, I think that changes her game.”

Miller said Costley admires that determination but told her to play smarter and be a threat in more areas of the court.

“I am kind of short to be a post,” Miller said. “He really wanted me to learn how to not go in full speed. I’m going to get blocked. I’m not very big. To learn how to pull up at the 3-point line. To pull up in the midrange. The little things matter no matter what anyone says.”

Before she takes the court as a Cougar, Miller can’t forget how her time as a Lady Bulldog shaped her into the player she is today. The differences between her freshman year and her now can’t all be seen from the outside, she said.

“Without him, I would not be going to play college ball,” Miller said. “I was very hard on myself, and it was mentally draining. They could see that, so they helped me build my confidence.”